Joseph Clawson was a farm boy in Lodge Grass, Mont., when one day the heavens opened and delivered a lesson that that would shape his future and eventually that of 2,500 children with facial deformities in Zimbabwe and Ecuador. 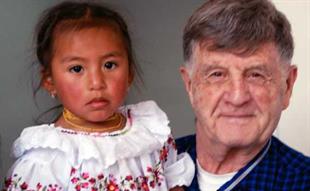 Years later, that lesson would precipitate worldwide attention for Clawson, a 1957 graduate of the University of Colorado School of Medicine. He and his brainchild, Operation of Hope, have been recognized by People and O, The Oprah Magazine. Recently, he fielded a call for assistance from Nelson Mandela.

The epiphany happened near the Crow Reservation, north of the Wyoming state line.

"My dad farmed in a little town that was subject to a lot of hailstorms," Clawson says. "One day my dad said to me that our neighbor down the way, Wilbur, had no grain to feed his hogs because a hailstorm wiped him out. He said we were going to the granary, and we were going to haul grain to him to get him through the winter.

"I was a kid and so I suppose I groaned and moaned a little, but I went and scooped up grain, and we delivered three or four to him."

"The next year, guess who got hailed out," he says, pausing for effect. "Every one of our neighbors showed up and filled our granary."

"I remembered that all my life. I always thought, ‘There’s got to be a way to do this.’"

The years sped by, and Clawson moved on with his life, establishing a plastic surgery practice in Longview, Wash., after leaving the University of Colorado.

Then in 1987, the lesson still alive in his memory, he found a way to act on it. He learned through a friend that a Youth With A Mission ship had been in port near Longview, so he tracked it down the next day, applied to volunteer his services to fix cleft palates and lips, and was accepted.

"Very few people knew how to go about doing this at that time," he says. "I’d made some inquiries over the years but didn’t get anywhere. It was a tiny, tiny accidental event that was meant to be."

He traveled to in the Dominican Republic, Jamaica, Honduras Mexico. Within three years, he branched out on his own and founded Operation of Hope, a 501(c) that he alternatively calls Operation Esperanza—hope in Spanish. 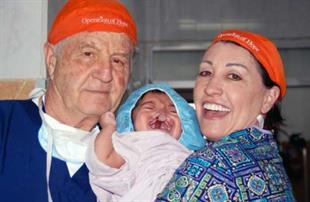 He headed to Ecuador, hoping to find a place that needed his help, knowing that Native Americans have the highest incidence of cleft lips and palates in the world.

"I found a little town and thought, ‘Aha!’" he says. "Opportunity struck, and you don’t wait. You have to open the doors yourself. So I did, and away we went."

Since then, Clawson has returned to the area every year, initially moving from place to place, but eventually settling in the town of Otavalo. He still fixes cleft lips and palates, and Operation of Hope has an agreement with University of California, Davis (UC Davis) to bring on other surgeons with different specialties in the area of facial deformities.

"We’re well known now through the whole nation," he says. "We get a lot of media coverage, so people come from everywhere."

He follows up with patients for years, which has a medical but also is good for the soul.

"I hear the most beautiful stories. I have patients who come back to visit, and I say to them in Spanish, ‘OK, you had a lip repaired in ’93. What benefit has there been?’ They always say, ‘You know I really appreciate that I can look normal. I can get a job. I’m back in society. But the most valuable thing is that I can talk to people.’ That is what they value most."

Clawson retired from his private practice10 years ago, and in 2006, Operation of Hope established another outpost in Zimbabwe.

During his years with the charity group, he often befriended locals, including Peace Corps workers.

"Eleven of them have become doctors. I wrote letters to help them get into schools, and every one of them did," he says. "They’re bright kids; they have a good work ethic; they’ve all graduated college—but they have no direction. But they became inspired by this work."

He teamed up with a friend at UC Davis to help a native Ecuadoran doctor, Maria Albuja Cruz, become a surgical resident at the University of Colorado. They’d met during a mission.

"I told him that I would like to help him in surgery, so he taught me how to do the procedures," says Cruz, now a fifth-year CU resident. "By the end, I was doing cleft palates by myself. 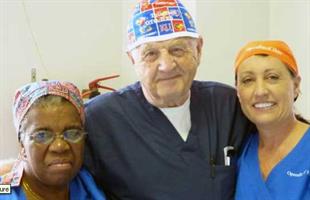 "He’s just amazing. It’s like seeing a piece of art to see him doing surgery. And he’s very humble. I’d do anything for Dr. Clawson. I have so many things to thank him for."

In Zimbabwe, Clawson has completed seven missions, and Operation of Hope has helped 500 kids. Africans have the lowest rate of cleft lips and palates in the world, but there is a dearth of doctors who can perform such surgeries. The need is so great that the team returns twice a year now, but Clawson has most likely made his last trip to Zimbabwe.

"The last few months I’ve been thinking about quitting. The program has gotten so big. I am 78 now, and I have to quit sometime."

So he developed what he calls his "four-year plan."

It hinges on a promising young doctor named Diego Teran who he helped get into a residency program to study plastic surgery in Bogotá, Columbia.

"He’s going to be joining me in January and for the next four years. He’s an accomplished plastic surgeon who can do cleft lips and palates. I’ll be 82 then. I want him to get to where he can be comfortable. But he learns quickly. He’s very smart."

In the interim, he’s resigned his position as director of Operation of Hope, and his daughter, Jennifer Trubenbach, has taken over leadership.

But he sees so much need that he’s now starting another nonprofit, JP Clawson Medical Missions, to reach out to more African and South American countries. Recently, he says, he was contacted by Nelson Mandela, the former president of South Africa, who was interested in beginning a training program for doctors.

"Even when I can’t continue doing surgery, I can still teach. I can still go on. I love medicine. It has kept me alive."

He doesn’t miss having a private practice because the paperwork—insurance forms, Medicare—became tiresome.

"I thought, ‘This is no fun.’ Now I’m doing work that is the love of my life. I’m having the greatest retirement a doctor ever had."