Getting the Inside Story on Health 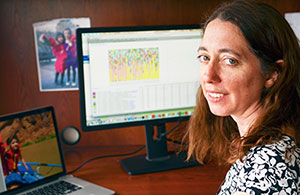 (May 2014) If you could peek inside the teeming forest of microorganisms inhabiting the innards of two people, you’d likely find more differences than similarities. While all humans have roughly 99.9 percent of their DNA in common, they share only about 10 percent of the species in their “microbiota” — their vast collection of resident bugs — with the person sitting next to them. And that microbiota changes, not only in the species present but also in what proportion. Microbiota also changes with age, disease, diet and other factors.

“We have 10 times more microbial cells in our bodies than we have human cells, and 100 times more microbial genes in our bodies than we have human genes, and there is tremendous variability across people,” explains Catherine Lozupone, PhD, assistant professor of medicine in the School of Medicine’s newly formed Division of Personalized Medicine and Bioinformatics. “It is a big challenge, in the face of all this variability and diversity, to sort out just what the most important microbes related to health .”

Over the past decade, Lozupone, a molecular biologist turned computational wizard, has taken up that formidable challenge, working with clinicians across a range of specialties — from HIV to graft-versus-host disease and from autism to obesity—to paint a clearer picture of what bugs people with certain diseases have in common and what function those bugs might serve. Using , high-throughput gene sequencing and a groundbreaking algorithm she designed, the 39-year-old mother of two has already published more than 50 papers, laying a foundation for a nascent field believed to hold great promise for yielding more personalized treatments and prevention strategies.

“These new tools are like getting a new microscope that allows us to study bacteria in ways we could never do before,” says Thomas Campbell, MD, a professor in the Division of Infectious Diseases who has been studying HIV for 22 years. “Catherine is the person sitting at the eyepiece of that new microscope.”

While growing up in New Jersey, and studying ecology at Villanova University in nearby Pennsylvania, Lozupone had visions of trekking through the rainforest someday, “searching for bird’s nests” as a conservation ecologist. But over time, she discovered her true talents lay in exploring an unseen world through a computer screen.

She earned her master’s in biology at Colorado State University and her in molecular, cellular and developmental biology at CU-Boulder, where she taught herself how to code and served as fellow to Rob Knight, , a pioneer in the field. In 2011, she developed UniFrac, a computer algorithm that now enables researchers across the globe to compare microbial communities. She joined the CU School of Medicine in 2013, bringing with her an encyclopedic knowledge of what’s been learned about the microbiome and an eagerness to start “connecting the dots.”

“Early on, a lot of papers were saying ‘Wow. Look at all this new stuff we never knew about,’” she says. “There was a discovery period. Now we are moving beyond and asking, ‘How do microbial populations change in the context of disease, and what does that mean?’”

In one oft-cited review paper, “Diversity, stability and resilience of the human gut microbiota,” Lozupone, who was the lead author, elegantly lays out what the science suggests so far: Babies are born with a stark microbiota, much like a forest growing from scratch after a fire, with opportunistic “weedy” varieties taking hold first, followed by a diverse canopy of species which forms a complex system by about age 3.

While one person’s “forest” may host different species from another (for instance, people from the United States have a very different microbiota from people in Malawi), each forest collectively serves a similar function: to extract nutrients from our diet for energy and to foster healthy immune function general, the more diversity the better. But illness, antibiotic use poor diet can, like a forest fire, knock down that diversity and provide an opening for weedy species (good or bad) to grow. For instance, people who are obese or who have irritable bowel syndrome tend to harbor fewer types of microbes than those who are lean or healthy.

“Ultimately we could offer more personalized treatments by tailoring them to the type of bacteria you have,” she says. 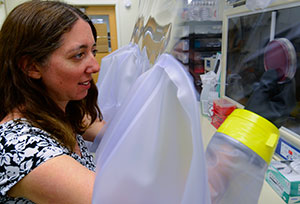 From probiotics to fecal transplants

Vu Nguyen, MD, an assistant professor of medicine at the Charles C. Gates Center for Regenerative Medicine and Stem Cell Biology, hopes to manipulate the microbiota to prevent graft versus host disease (GVHD) in cancer patients undergoing stem cell transplants. The potentially lethal syndrome occurs in as many as 60 of patients when the stem cell graft launches an immune system attack against the patient.

Because GVHD occurs primarily in the gut, liver skin, researchers have long suspected that the microbiota plays a key role, and so administered powerful antibiotics prior to surgery. The problem with that approach, says Nguyen, is that “by blindly eliminating every bacteria you can, you are potentially removing a lot of good bacteria important for immune development.”

He’s working with Lozupone to get a better handle on why some patients develop GVHD while others don’t. Preliminary research already shows that those going into surgery with a more diverse microbiota do better.

“Ultimately, if we could identify subsets of flora that are more pro-inflammatory and perhaps make people more prone to getting the disease, we could develop drugs to eliminate that subset of flora only,” he says. Next-generation probiotics could also be developed to promote of protective microbes prior to surgery. Or perhaps patients could have their microbiota screened — much like blood and DNA already are — to help doctors find a better donor match for or to determine, based on the state of their gut flora, the best time for surgery. Nguyen also is planning a clinical trial in stem cell transplant patients using fecal microbiota transplantation (i.e., transplanting fecal from a healthy donor, via enema, into a patient) to recalibrate his or her depleted flora, in hopes of preventing GVHD.

“Obviously, there is a psychological barrier in the general public about getting a fecal transplant, but in anyone who is experiencing a serious disease, it is quite a trivial intervention compared to what they have to go through,” Nguyen says.

Lozupone’s research with Campbell, screening the microbiota of people with HIV, is also yielding promising results. People with HIV, no matter what their diet is, seem to have an abundance of a type of bacteria called Prevotella and lack a type called Bacteroides. Interestingly, she notes, their guts look a lot like those of healthy people living in agrarian societies and of U.S. adults who eat little fat and protein and lots of carbs. If the microbiota forms, in part, to best metabolize what it is fed (as many believe) it would make sense for a healthy vegetarian to lack Bacteroides, which has anti-inflammatory properties believed to counteract the metabolic consequences of eating red meat, and have ample Prevotella, which doesn’t do so well metabolizing fat and protein. But why would a man with HIV on a typical Western diet have a gut that looks like a vegetarian’s gut?

That has yet to be determined, but Lozupone suspects that many of the side effects of HIV (metabolic disorders, gastrointestinal problems, etc.) may have something to do with this “mismatch” between the microbiota the person is cultivating and the diet they are eating. A potential solution? “If they cannot change their microbiota because we are not there yet, perhaps they could change their diet to match the microbiota they have,” she says.

The most common question she gets, whether from acquaintances at dinner parties or from reporters (The New York Times Magazine recently interviewed her for a cover story) is this: What if I’m already healthy and want to stay that way?

She does not respond with a specific gut-friendly diet or one cure-all probiotic. Instead, she says, “Just eat real food.” “It is important to have a microbial community that is functioning well and producing the metabolites that your body, based on its evolutionary history, is expecting to see. If you eat all sugar and refined flour your body will digest it all before it gets to those microbes,” she says. “If you eat whole foods like fruits and vegetables, and complex carbs, and be sure to get enough fiber, it gives that bacteria something to chew on, allowing it to evolve into a complex, healthy ecosystem.”