An Anesthesiologist's Life After Football 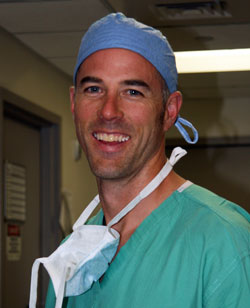 But at Denver Health there is someone in those rarified ranks: a , laid-back doctor who pads through the hallways in baggy surgical sweats, sporting designer stubble.

Few at the hospital or on the CU School of Medicine faculty know the whole story about their colleague, who has already had one dream-come-true career and is now embarking on Chapter Two.

And that’s exactly how Dr. Greg Myers wants it.

But the record books do.

His football legacy is remarkable, especially for someone who always said playing ball was just “a journey, not the path.”

Plucked from a 2A high school football team in small-town Windsor, Colo., he played for the Colorado State University Rams where he was twice named an All-American. As a senior, in 1995, he won the Jim Thorpe Award as the best defensive back in the nation.

Also a standout in the classroom, he remembers sitting in an advisory meeting as an incoming freshman at CSU, talking about entering the pre-med program. The advisor warned him: “It’s going to be very difficult to do this and play Division I football.”

Myers thought about it for a moment and said, “Oh, OK.”

He earned Academic All-American honors in back-to-back years, was named the Western Athletic overall , the Honda of the Year and received an NCAA post-graduate scholarship.

Born in 1972 in Florida, he came to Colorado with his family when he was a toddler. After his parents divorced he was mostly raised by a single mother who worked long hours as a seamstress, though his dad was in the picture.

Money was tight, his mother Carol Myers admits. She remembers that even as a small child Greg had the gifts of determination and perseverance, announcing a goal and then making it happen. Once, when he was about four he told her not to look out the window until he said it was OK. Of she peeked and watched her son teach himself to ride a bicycle.

By age 12, sitting in the emergency room with a broken arm, he looked around the hospital and announced, “I’m going to be a doctor, Mom.”

Myers traces his work ethic to his annual summer visits to his grandparents’ farm in Kansas. At age 8 his grandfather took him out on the tractor, showed him once how to drive it and then hopped off. “You’re on your own.” To this day Myers can conjure the fear, the excitement, the pride of driving that tractor through the fields. By age 10 he was driving a combine.

“I think working on the farm had a big impact on me,” he says.

At CSU, he juggled academics and sports, having to take fewer class credits during the season, then making them up later. He met his wife, Kara, his freshman year. She was skeptical at first, having no use for football players; but in the he won her over. They have been married 12 years and have two children.

By his junior it seemed likely that he might play pro football. In 1996 he was drafted in the fifth round by the Cincinnati Bengals. He was the 144th player picked overall, lower than expected. Myers can’t help but wonder if rumors of his medical ambitions might have cooled some interest.

“I got a call from the Bengals and they said, ‘You’re not going to medical school are you?’ They didn’t want to waste a draft pick.” He could honestly say no because he already had arranged a deferment for medical school admission.

“He never lost sight of wanting to be a doctor,” his mother says of her son’s pro years, adding that he never got sucked into the idea of celebrity. She said he saved most of his salary for medical school.

“Football never really defined him,” agrees longtime friend Dr. Ed Nortier, an anesthesiologist who first met Myers when he was an athletic trainer for the CSU team; they studied together. In those days, at that school, it was not uncommon for football players to have ambitions beyond the playing field.

“Maybe it’s different at the big-time football programs,” Nortier says, “but at CSU football was fun.”

Pro ball was different. Myers felt disillusioned by the business side of it, how players were seen as commodities. After four years with the he was released after a tendon injury. He returned to Colorado and worked as a night manager at an ice rink in Steamboat Springs for a boss who could not figure out why someone with Myers’ resume would take a job that included scrubbing bathrooms.

Then, in mid-season, he was picked up by the Dallas Cowboys. He played out the rest of that year and ended his football career in 2000. Then came the medical school education he’d long delayed. He graduated from the CU medical school in 2006.

“It wasn’t a hard transition,” says Myers, now 39. Maybe because he was older and married, or maybe because he had already had a taste of a different life, his priorities were clear. He first considered family medicine but then his friend Nortier suggested anesthesiology.

His football days prepared him for life in the operating room at a Level One trauma unit, he says. He thinks fast on his feet, and can anticipate potential problems just as he once sized up an opposing team’s offense.

“I’m always trying to think two steps ahead,” he says. “It makes me a better doctor.”

Myers, an assistant professor at the medical school, still is collecting awards. He was voted 2012 Outstanding Teacher of the Year by the anesthesiology residents.

“I consider it a huge honor,” says the man whose life has been filled with honors.

But there was still one more to come.

In May a package landed on his front porch. It held a football and a letter that began: “Congratulations….” He had just been named to the college football Hall of Fame and will be honored at a ceremony in December in New York. CSU marked the event at halftime of a recent football game.

It was a reminder of a past that he’s mostly put behind him. He doesn’t even watch football on TV. For years, his trophies had been stashed in a box in the garage.

Only recently, after moving to a house where he finally has an office, he pulled out those accolades and displayed them. At least for now.

“It’s strange to look at them. It feels weird,” he says. He says he may take them down again. He doesn’t want to look like he’s bragging.