A gift to Connect Cardiologists Around the World 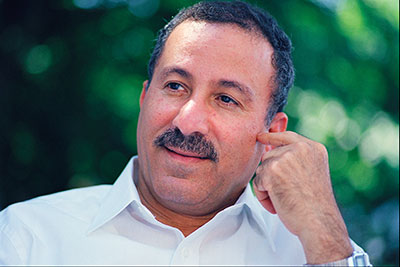 (November 2014) Hajar A. Hajar Al Binali hunched over his desk, scribbling algebraic calculations in Arabic letters. When he arrived at the solution to the problem, he wrote the answer using the Roman alphabet. His American professor looked at him with skepticism when he handed in his work.

“If your final answer is incorrect, I can’t give you credit for the Arabic calculations,” he told Hajar.

A newcomer to the U.S. from Qatar in the late 1960s, Hajar had to conquer all the requirements for his bachelor’s degree before he could achieve his dream of becoming a doctor.

“After finishing junior high school, he went to the United States on a government scholarship,” Hajar’s wife, Rachel Hajar, MD, says of her husband’s early years of U.S. schooling. “He could not understand a word [of English].”

Luckily for cardiology patients in his native country, Hajar learned English—and, by the way, aced that undergrad algebra class. He went on to earn a bachelor’s degree from CU-Boulder in 1969 and a medical degree from the CU School of Medicine in 1973.

Hajar returned to his native country in 1978 and proceeded to make a health legacy for himself. He established a cardiology service with a coronary care unit, a cardiac catheterization laboratory cardiac surgery. Hajar’s efforts to modernize health care in Qatar included setting up an appointment system, initiating computerization of the medical record system and establishing a database of cardiac diseases in Qatar.

Because the labor force in Qatar is composed of workers from poor foreign countries, he introduced medical screenings for major communicable diseases such as tuberculosis and leprosy. Previously nonexistent medical services became available, such as pediatric cardiology, and hematology, pulmonary and gastrointestinal services.

“He was responsible for catapulting medical care in Qatar into the 21st century,” Rachel Hajar says of her husband. “He is considered the father of modern medicine and cardiology in Qatar.”

Hajar noticed a high incidence of coronary artery disease and a high prevalence of smoking in Qatar and spearheaded a national antismoking campaign. In 1999, he was appointed Qatar Minister of Health, where he worked to help pass the national tobacco control laws in 2002.

Hajar had childhood memories of his father, an Islamic judge, preaching against smoking in mosques. While a CU student, Hajar wrote a chapter in his father’s book, “Smoking: A Slow Suicide.”

Bringing the international cardiology community together

In honor of her husband and the work he is doing, Rachel Hajar gave a gift to the School of Medicine, establishing a visiting scholar program in cardiology. It will focus on collaboration among different institutions, meaningful professional relationships and information exchange across cultures.

“The program is an opportunity for cardiologists from around the world to obtain a focused and enhanced cardiology experience, which they can pattern or model in their home country,” she says.

Peter Buttrick, MD, professor of medicine, physiology biophysics, and head of the Cardiology Division, says, “We could not be more grateful to Rachel Hajar for this generous gift. Not only is it a proper tribute to the medical legacy of her husband, but it will bolster our department through meaningful connections with the international cardiology community.”

A story of love and giving

While the gift honors her husband, Rachel Hajar deserves as well.

She, too, is a cardiologist, currently director of noninvasive cardiology at Hamad Medical Corporation in Doha. She also is founder and editor-in-chief of Heart Views, the cardiovascular journal of the Gulf Heart Association, and a fellow of the American College of Cardiology.

Originally from the Philippines, Rachel Hajar moved to the U.S. for her medical education and then to Qatar once married to Hajar. She authored a memoir, “My Life in Doha: Between dream and reality,” about her life in Qatar and her transition into an Arab-Islamic culture.

The book is not only an account of her experiences; it is also a love story. And that love, along with her passion for medicine, drove Rachel Hajar to give to the University of Colorado.

“I wanted to honor [my husband’s] medical legacy. I thought, ‘What better way to honor someone than to name a program after him at his alma mater?’”

Hajar A. Hajar Al Binali, MD, is the director of Medical Education for the Heart Hospital of Hamad Medical Corporation in Doha, Qatar, where he was also chairman of Cardiology and Cardiovascular Surgery, chairman of the board of directors and managing director.