(October 2011) It was 9 p.m. on a winter night in 1992 when Dr. Fran Hickey’s career as a young pediatrician specializing in children with disabilities became intertwined with his personal life.
That’s when Hickey’s fourth child was born.

“The moment I saw James’ face I knew he had Down syndrome,” says Hickey, now 55.

He settled his wife, Kris, and newborn in at home and buried himself in every article he could get his hands on to get a sense of what was in store for the newest member of his family.

“Frankly, the literature was pretty weak and it wasn’t happy reading,” he says. So he set out to change that.

Since then, Hickey—the newly appointed medical director of the Linda Crnic Institute for Down Syndrome’s clinical care center at Children’s Hospital Colorado—has dedicated his life to improving the care of children with this diagnosis. 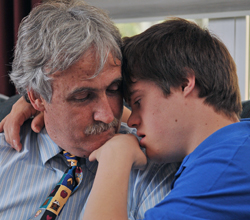 He has served as to hundreds of families who say he understands them like no other, spearheaded research in a funding-starved field and volunteered so much time fighting for the rights of his patients that in Cincinnati an annual child advocacy award was created in his name.

Since 1997, when he discovered James is also autistic, he has become one of the few professionals in the nation to study the confounding, oft-overlooked dual diagnosis, which impacts 7 percent of children with Down syndrome

And at a time when much media attention and funding is going toward prenatal testing to screen for Down syndrome and give mothers-to-be the option to terminate, the outspoken Boston-born family man is focused on a very different goal: To raise awareness about what Down syndrome is really like, and make life better for those who have it.

“To me, it isn’t even like working,” he says as he rushes to his next appointment, clad in a pinstriped shirt, stethoscope loud Charlie Brown tie. “I do it all for James and other kids with Down syndrome.”

According to the Centers for Disease Control, one in 691 babies is born with Down syndrome, which occurs when an individual has three copies of the 21st chromosome.

People with Down syndrome have an increased risk of congenital heart defects, Alzheimer’s disease, childhood leukemia, sleep apnea, celiac disease, thyroid conditions respiratory, vision and hearing problems. Life expectancy has increased dramatically, from 25 in 1983 to 60 today, largely due to more widespread cardiac surgery at birth, access to medical care and deinstitutionalization. Still, medical and cognitive problems persist for those living with Down syndrome.

Yet, while it is the most common birth defect in the country, funding for Down syndrome has lagged its prevalence, with $22 million in 2011, down from $29 million in 2001.

“Most of the stuff being funded is around prenatal testing,” according to Hickey, an associate professor in the medical school’s Department of Pediatrics.

In 2008, the Linda Crnic Institute at the University of Colorado medical school was founded to “change the paradigm of how people with Down syndrome are perceived by society” and to provide the first global institute to encompass both research and patient care. In November 2010, Hickey was the first hire for the institute’s clinical care center, the Anna and John J. Sie Center for Down syndrome at Children’s Colorado. 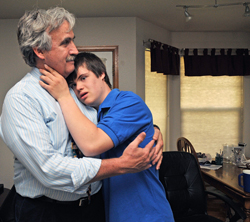 “We are delivering on the promise of a dream team of Down syndrome-specific experts,” said Edward R.B. McCabe, MD, the Crnic Institute director. “Fran’s dedication to research is essential.”

Growing up in the , Irish Catholic neighborhood of Dorchester, Mass., Hickey learned the meaning of hard work early on. His father ran a laundry in the local Veterans Affairs hospital. Hickey’s mother, his hero, raised three rough-and-tumble boys. And “there was no such thing as a day off,” Hickey recalls in his thick Boston accent.

Soon after his fellowship at Boston Children’s Hospital and Harvard, he opened his first practice in rural Batesville, Ind., and developed a reputation as someone with expertise working with children with special needs.

Then James came along.

“I became the pediatrician who has a child with Down syndrome,” Hickey says.

A typical pediatrician might see a few patients per year with Down syndrome. Hickey ended up with 80 in his patient population in Cincinnati, where he moved in 1993 and stayed for 17 years.

“Everyone wanted Dr. Hickey,” says Marina Vina, whose daughter Natalia Garcia, now 16, was a patient. “Having a pediatrician with a child who has Down syndrome is just a completely different world. He not only understands the medical side of but also the parent side.”

Hickey learned early on that his fellow physicians tended to engage in “diagnostic overshadowing”—overlooking associated conditions like sleep apnea or hypothyroidism and autism, writing them off as simply “due to Down syndrome.”

To address this, he delivered to pediatricians 150 copies of the American Academy of Pediatrics guidelines on supervising children with Down syndrome. He has since helped modify those guidelines, created an online checklist and lectured to hundreds of clinicians on the topic.

“I always say ‘listen to the parents.’ If they have concerns and you don’t address them, you may miss something. Autism is a perfect example.”

James was a healthy outgoing kid and an avid reader when, at age 5, he stopped speaking and making eye contact.

“He just disappeared,” Hickey recalls. “It was heartbreaking.” 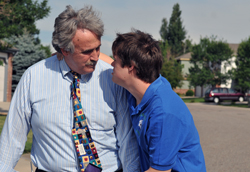 Once he and Kris, an anatomy and physiology professor at of Cincinnati, heard James’ diagnosis of autism, Kris organized and coordinated an in-home program that zeroed in on the unique problems associated with autism: loss of play skills, expressive language social interaction. This has enabled James to regain some of his sociability.

“He is the greatest person ever to be with, even if there are challenging moments,” Hickey says. “We go for walks and swims. He just wants to be with you. He is a giving kid.”

But he realizes not everyone does so well. To date, there have been fewer than 10 studies involving patients with Down syndrome and autism, and Hickey suspects many cases go undiagnosed.

To remedy this, he has authored numerous articles and a textbook chapter about dual and intends to expand upon the research at CU.

Hickey says it was tough to leave a practice he loved and uproot James and Kris. But he saw the Sie Center as a unique place with a host of opportunities for him to do good.

He’s already begun collaborating with subspecialists in endocrinology, sleep medicine, immunology other areas to boost what he still sees as a “dearth of research” on the prevalence of various conditions in people with Down syndrome and how to ease them. And he hopes to turn CU into an epicenter of a national Down syndrome database.

Meanwhile, as headlines herald a noninvasive prenatal blood test which will soon enable women to screen for Down syndrome as early as nine weeks into a pregnancy, he’s determined to better educate genetic counselors, pediatricians parents-to-be.

“I believe there is a misperception out there that having a child with Down syndrome is the worst thing in the world,” he says. “Ironically, some things that certain people think are so dreadful can end up being the best parts of your life.”