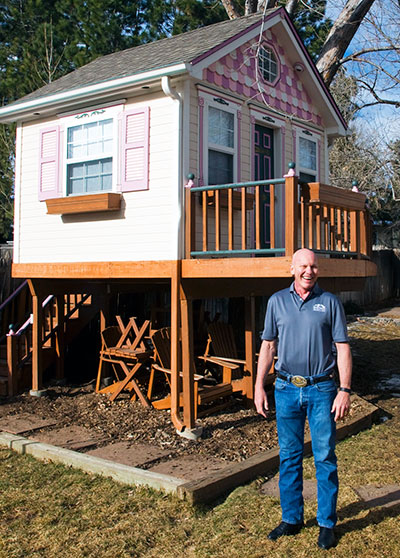 (May 2016) John C. Hill, DO, is a single human being, tall, lean, bald-shaven, and, on this morning in his south Denver home, wearing a belt with a silver buckle he earned by finishing the Leadville 100 Mountain Bike Race in under 12 hours. But he must have some cat in him, in his case, living nine lives all at once.

Hill has delivered a thousand babies, yet is somehow also a CU Sports Medicine subspecialist in an orthopedic musculoskeletal ultrasound technique he helped pioneer and applies to the injuries of many UCHealth patients. He’s an avid cyclist, with his stationary trainer perched in a corner of the family room and a carbon-fiber tandem bike he rides with wife Gail that hangs in a space adjacent to the garage.

"It handles great,” he says, “Even going sixty or seventy down mountain passes.”

In 2013, Hill earned three patents for an approach to identifying glycogen stores in muscle using ultrasound, which is best known for its ability to discern boy from inside a belly. The patents hang on the wall of the backyard treehouse he uses as his home office. He built the treehouse for his daughters 19 years ago, when they were three and five years old, and has had to replace its surrounding deck four times as the sugar maple further asserts its girth. The out at his nose, but it’s got 220-volt service, R-40 roof insulation a programmable thermostat-controlled heater. He built the treehouse using tools in a 1,000-square-foot wood shop he also built, in which switching on the power band saw, drill press, lathe, thickness planer, , table saw or router drops the amperage such that the dust collector turns on as if by magic.

At about 6:30 a.m. every other Saturday and Sunday during the winter, Hill slips skins over his skis and heads up Winter Park Mountain, assessing the snow conditions during the hour-long climb. If it’s hard-packed, there will be broken wrists and dislocated shoulders; if soft, he anticipates blown knees and tibia-fibula fractures. He skis down and serves as an attending emergency physician at the base, where he tends to prove himself right. Last year, he restarted a guy’s heart four times with a defibrillator; three weeks later, the man walked in to thank him. Both of them had tears in their eyes.

The challenge with John Hill is grasping that a single human being could possibly manage to do all these things and more while staying happily married for 34 years, raising two daughters, and narrowly escaping death by at 22,000 feet in Nepal along the way. It helps to start from the beginning.

Hill was born in Denver 59 years ago. His father, his father’s father, and his great-grandfather were all carpenters. Hill went to South High School, the University of Northern Colorado and Colorado State University, studying music theory and composition, speech pathology and audiology. He toyed with the idea of becoming a but decided he would follow the spirit of another carpenter and do missionary medicine in Africa. He earned his doctor of osteopathy at Western University of Health Sciences in Pomona, Calif., and headed for the University of Missouri at Kansas City, where he did his residency at Truman Medical Center-East. He imagined what skills a doctor in the African hinterlands might need and learned them, doing surgeries, setting bones and delivering 300 babies by the time he wrapped up his residency in 1990. He passed his Family Medicine boards and was all set to head to Africa when he and wife Gail adopted their two daughters. One turned out to have a medical condition that precluded overseas travel.

So Hill worked in emergency rooms and did primary care in Missouri until 1994, when he and Gail, who grew up on a dairy farm in Fort Lupton, moved the family back home to Colorado. For years he was on call every second or delivering babies and doing C-sections, working with residents and helping in a training program for advanced obstetrical skills. Being an ultrasound expert came with the territory.

Meanwhile, he had long been a competitive cyclist, had run the Boston Marathon and had started doing triathlons. His interest in sports medicine grew.

“Virtually everybody in sports med is a beat-up athlete,” Hill says. “You try and figure out more and more how to keep yourself alive and doing stuff.”

So in addition to his work in obstetrics and as a family physician (his University of Colorado academic appointment was and is with the Department of Family Medicine), he became more involved in the growing field of primary care sports medicine.

“It’s not just waiting until someone tears their ACL – it’s exercise physiology, performance assessment training, more in-depth rehabilitation, understanding the biomechanics, and a lot of emphasis on ,” Hill says.

By 1998, he had founded and was directing the CU School of Medicine’s Primary Care Sports Medicine Fellowship, which he continues to do. Right around the same time, ultrasound manufacturers developed machines capable of imaging superficial tissues. Hill used it for guiding needles toward breast cysts and thyroid glands. And then he took a resident along on a mountain bike ride, and the resident missed a corner and crashed. For six months Hill used the tool to watch a partial thickness rotator cuff injury heal. When he presented the results at a conference, he said, “There was a total hush in the room. No one had ever seen anything like it.”

Hill helped pioneer musculoskeletal ultrasound, which every primary care sports medicine fellow in the United States is now required to learn, he says. It’s something like an MRI image, but one that allows the patient to move, thereby letting the physician observe how motion affects the injury. It works on ankles, knees, thumbs, hips, shoulders, wrists, elbows and more. It can help doctors set fractures more accurately and place needles in the one-millimeter space of the biceps tendon sheath. Trying to do that blind, Hill says, “the odds are like hitting the lottery.” More recently, Hill has been using a Tenex procedure to use ultrasound to both guide and repair tendon injuries causing tennis elbow, plantar fasciitis, and shoulder, patellar and Achilles tendon injuries. With all the sports medicine work, he’s tapered off his obstetric load.

Look at these muscles

He’s extended his ultrasound investigations from tendons to the muscles themselves – in particular, the amount of glycogen fuel resident in a muscle, information of great interest to endurance athletes and their nutritionists. He and Iñigo San Millán, , CU Sports Medicine’s Exercise Physiology Lab director, studied riders from the Garmin pro cycling and linked the flow of water in a muscle with that of glycogen. Comparisons with biopsies confirmed a strong and led to the patents hanging on his treehouse office wall.

“I have a lot less energy and a lot more sanity than he does,” quips Gail.

Hill would have had it the previous year, too, but, running the entire Leadville Trail 100 on a cracked calcaneus (heel bone) slowed him down. He finished eight minutes after the 30-hour run’s cutoff. Rather than a belt buckle, Hill got three months on crutches.

He earned the belt buckle he’s wearing this February morning in the 2015 mountain bike race, but he says he’s taking this summer off from Leadville, he says.

“It’s hard to balance all of the different things,” Hill says.

Though one does suspect that, as much as any single person might, he will find a way to fill the void.

This article originally appeared in the UCHealth Insider in February 2016.