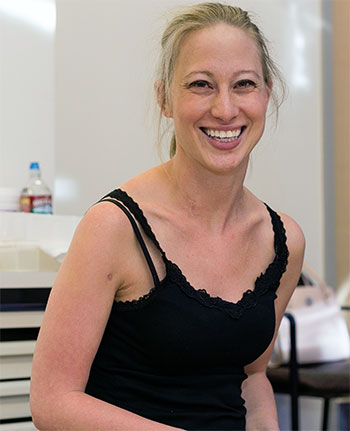 Her lifelong dream of dancing and even performing on television’s “Dancing with the Stars” just seemed unattainable. She feared no one would want to waltz with her if she was unable to open her hand enough for someone to hold it.

“The words ‘graceful’ and ‘cerebral palsy’ are not words typically used in the same sentence,” says Sarah, who has spastic cerebral palsy.

Watching Sarah today, her gracefulness shines on the dance floor and she also is helping researchers at the University of Colorado Anschutz Medical Campus explore how cerebral palsy impacts health and mobility in adults.

James Carollo, , PE, director of the Center for Gait and Movement Analysis (CGMA), says researchers can learn from Sarah’s active lifestyle, which is why he invited her to participate in the Cerebral Palsy Adult Transition (CPAT) study. CGMA was developed in 1999 as a collaborative effort between Children’s Hospital Colorado and the University of Colorado School of Medicine’s Departments of Physical Medicine & Rehabilitation and Orthopedics.

“Some people with cerebral palsy assume that their disease will force them to stop walking at some point in their lives,” says Carollo, an associate professor in the School of Medicine’s Departments of Physical Medicine and Rehabilitation and Orthopedics and the University of Colorado Denver | Anschutz Medical Campus’s Department of Bioengineering. “They often think it is a natural consequence of the disorder,” Carollo says. “However there’s no evidence to suggest that.”

Carollo theorizes that maintaining an active lifestyle can help maintain gait and walking ability—ultimately allowing individuals to stave off secondary conditions that accompany a sedentary lifestyle.

The many hours Sarah spends practicing and performing her dance routines could also be helping her to maintain her overall health. 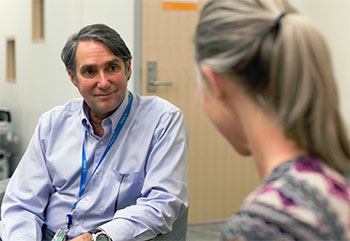 Sarah was eager to participate in the CPAT study because she knew there is little research on adults with cerebral palsy.

“I was excited to learn they were doing research to help people over 18 with cerebral palsy,” says Sarah. “There aren’t a lot of resources for that, and the condition doesn’t go away just because you’ve turned 18.”

The CPAT study is designed to understand how the walking abilities of people with cerebral palsy change during the transition from childhood to adulthood. Carollo, with coinvestigators Patricia Heyn, , FACRM, and Amy Bodkin, PT, , PCS, both associate professors of physical medicine and rehabilitation, analyzing more than 70 former CGMA patients to see how their gait and other variables compare to data collected when they were children.

“Patients with CP tend to get lost between 18 to 21 years old,” says Bodkin. “This happens to many adults with pediatric conditions. It is a combination of a lack of specialists and lack of insurance, as well as limited access to the healthcare system.”

Seeking to provide an additional resource for CPAT study participants, Carollo, Heyn  Bodkin have created an individualized “health passport” for every participant. The health passport incorporates data collected from the gait analysis as well as lipid and insulin panels, quality of life assessments and other tests to give guidance on how they can live a healthy lifestyle. The passport is presented at a conference with the participant and their family.

“The health passport has been a strong motivator for patients to participate,” says Carollo. “The passport is valuable to them since it provides information on how they might maintain or improve movement and overall health status going forward.”

Carollo and the CPAT research team just completed the data collection phase of the study in August. They hope that once analyzed, the data will shed light on adults with cerebral palsy and offer new ideas on how to improve overall health and avoid secondary conditions often reported in this vulnerable population.

“As a person who values measurement, I feel very privileged to test our previous patients not as an evaluation of the past, but as a roadmap for the future,” says Carollo.

Sarah was initially inspired to follow her dream of learning to dance after seeing a news report about a blind person who learned ballroom dancing. She knew her challenges were different. She called Colorado Dancesport, a dance studio, and explained her situation. She scheduled a lesson that she ultimately .

Six months later, on the eve of her 29th birthday, Sarah rescheduled. This time, she kept the appointment.

“I stood across from my instructor, held out my hand, and I said, ‘Hello my name is Sarah, I’m 29 years old, and I would like to learn how to waltz.’”

Even though learning to dance proved more difficult than she first thought, Sarah eventually had the dance down. Five months later, she and her instructor were performing a tango routine in front of a live audience. After that, she entered her first ballroom dance competition.

“I dance because I love it,” says Sarah. “I hope when I dance people see that.”