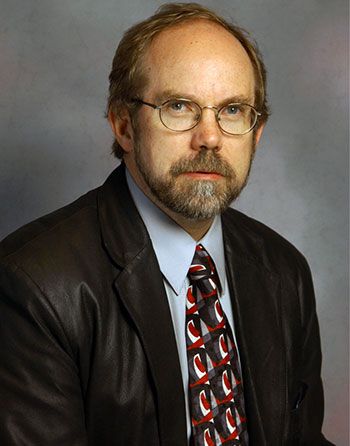 (December 2017) Greg Everson, MD, professor of medicine, retired this summer from the School of Medicine after making many pioneering contributions to the treatment and care of people with hepatitis C, a condition that was not even known when he was beginning his career 40 years ago.

From his office in the Hepatology and Transplant Center on the seventh floor of of Colorado Hospital, Everson reflected on his productive his career in research and medicine.

In 1979, when Everson came to the University of Colorado as a fellow, the viral infection called hepatitis C had not yet been identified. In the 1980s, researchers discovered the virus and in 1989 the FDA approved a test for it. And until a few years ago, doctors could treat, but could not cure, most cases and the treatments had considerable side effects.

Hepatitis C is a widespread disease. Each year in the US, nearly 20,000 people are infected and an estimated 3.2 million people have chronic hepatitis C. Yet today, 98 percent of all patients can be cured.

Everson’s role in finding a cure is significant. In the 1980s, Everson and his colleagues at CU helped discover the disease. For more than 30 years, he studied and treated hepatitis C in thousands of patients.

Through his work at the Clinical and Translational Research Center

(CTRC) of the Colorado Clinical and Translational Sciences Institute (CCTSI), Everson made major contributions to the testing and evolution of the drugs that led to the cures for hepatitis C.

“Because of Greg’s insight and tireless work at the CTRC over the years, we now have a cure for hepatitis C. His leadership and contributions to the study design and testing of these drugs cannot be overstated,” said CCTSI Director Ron Sokol, MD, professor of pediatrics.

Everson led the Hepatitis C Antiviral Long-Term Treatment Against Cirrhosis (HALT-C) study at the CTRC, which started in 1999. The CTRC was one of 11 centers that participated in this National Institutes of Health-funded study.

At that time, patients with hepatitis C were treated with interferon, which worked for only about 30 percent to 40 percent of those infected. The HALT-C study reviewed whether low-dose maintenance levels of interferon would suppress the disease from advancing. While the treatment itself wasn’t successful, the study was a wellspring of insight into the disease.

“Unfortunately, the treatment did not work,” Everson said. “But 75 original publications came out of that. And those 11 centers enrolled over 1,300 patients. We followed them for 10 years. There was a very low dropout rate because the university and the CTRC were basically a beacon of light for these people.”

Those 75 publications spawned research activity and findings that would continue until a cure was developed.

In 2011, Everson led trials of Telaprevir and Boceprevir at the CTRC. Cure rates jumped from 30 percent to 70 percent, but the drugs were quite toxic. They were used with interferon and ribavirin. “A lot of patients tolerated the treatment, but there was a lot of misery,” he said. “Most of what we were doing as doctors treating side effects of interferon.”

That same year, Everson led an annual review at a national hepatology meeting. “Between 2010 and 2011 there was a huge burst of activity. There had been about 900 papers published in that time,” he said. “I reviewed what I could before the talk. I picked out some new drugs [to discuss] that looked promising.”

Everson called it his “horizon talk” because there was so much data on new promising therapeutics.

In dozens of trials over the next five years, doctors continued to refine treatments. Because the disease has six genotypes, and subtypes under that, patients originally needed treatments tailored to their unique disease type. Over the past few years, drugs have been developed that are effective against all six types. Today, 98 percent of all patients treated can be cured.

“From trial to trial, Greg’s steady pursuit of the best therapeutics to treat hepatitis C contributed repeatedly and successfully to the curative therapy we have today,” said Professor Robert Eckel, MD, former CTRC director. “We’re all proud of that history and thank Greg and his team for their efforts and perseverance.”