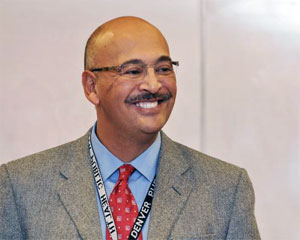 At a lunchtime party at Denver Health Medical Center, the table is laden with plates of raw vegetables and a pyramid of bite-sized, low-fat Subway sandwiches. Dr. Chris Urbina huddles conspiratorially with a group of women to trade tales from the scales:

“Did you lose weight?” Urbina, 55, asks. For nearly an hour his easy smile and friendly tone have not wavered as he works the room to celebrate the results of a hospital initiative to encourage hospital employees and members of the community to eat healthy through the calorie-laden holiday season.

“I gained a pound,” confesses one woman, bracing for a scolding.

“I gained five,” Urbina whispers back. In truth, he gained five and lost four between Thanksgiving and New Year’s but empathy seems more important than detail at this moment. The woman returns a relieved grin.

On another day in another part of the hospital, Urbina peeks in on a middle-aged patient, a mother of four who has been complaining of body pains and extreme fatigue. Urbina speaks to her in Spanish and tells her the tests have come back normal. “How are things at home?

How is your stress level?” he asks, probing for the true cause of the woman’s medical problem.
The woman begins to cry softly. She has had to work extra hours to help provide for her family. She feels overwhelmed but is reluctant to ask for help. Urbina gently encourages her to ask her family to pitch in a little more. She could be his own mother. He knows the culture of working-class Latino families well because those are his own roots. 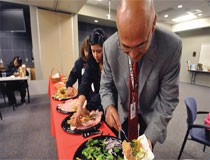 In 2004, Urbina, a 1980 graduate of the University of Colorado School of Medicine, was named of the Denver Public Health Department, which is part of Denver Health. With him came a long-held philosophy that individual medical practice and the larger role of community health are intertwined.

“There are enough providers who can help individual patients,” he says. “I’ve chosen to do both. I’ve chosen to work in public health to impact entire populations.”

From the start, Urbina threw himself into his new role with the zeal of a politician canvassing the neighborhoods, which, in many ways, he was.
Urbina would walk the West Denver streets talking to restaurant owners, shopkeepers, church leaders and moms pushing strollers. He was always listening, learning, respecting the way people lived and trying to find common ground. Many felt marginalized and ignored. Urbina knew they would simply tune out someone who lectured them about making good health choices.

“It’s all about relationships and establishing trust,” he says. Without such trust how can he and his team tackle the bigger health issues facing the public such as obesity, sexually transmitted diseases, smoking and, most recently, the H1N1 flu virus? 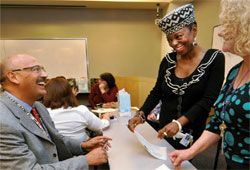 Urbina grew up the middle of three children in a working-class family in a Latino neighborhood of Pueblo, Colo. Racial bigotry was never far from the surface. He says he still remembers the “Whites Only” signs.

His father was a mail carrier who dropped out of high school to help support his parents. His mother was a clerical worker who later became a nurse. Veronica Urbina, 80, says her son was always driven, even as a young boy. When his older brother entered school, Urbina went with him, enrolling at age four.

She cannot remember a time he was not interested in helping others less fortunate. There was a desire to an unfair world, she says, which later evolved into activism.

After high he applied and was accepted to Stanford University where he graduated with a degree in biology. From Pueblo to Palo Alto was a culture shock. But it honed an important skill to, as Urbina’s future mentor Dr. Arthur Kaufman called it, “live on both sides of the road.”

From there he returned to Colorado for medical school. While in school he worked to bring medical service to migrant farm workers who had none. As a part of a team of he helped provide immunizations, checkups, education and basic medical care for the poor in the evenings after they returned from the fields. He then traveled to the University of New Mexico for his residency in family medicine. His first job was Public Health Director in Las Cruces, N.M., where he worked with the Spanish-speaking population near the Mexican border and immersed himself in the delicate balance between medicine and culture.

An inclination to help others

He left New Mexico to earn a master’s in public health from Johns Hopkins University before being recruited to return to the University of New Mexico Medical School to teach.

“He embodied everything that was important to us,” says Kaufman, a professor and former chairman of the University of New Mexico Department of Family and Community Medicine. “When you see patients you don’t just see the individual, you see the whole community through that patient’s eyes. Chris did that. His first inclination was always to help others.”

As Urbina’s 1960s change-the-world generation grows into late middle age, the activism he embraced has not waned but simply evolved: “Instead of wearing blue jeans and a T-shirt with a logo on it, now we wear a suit and tie.”

Deeply modest, Urbina prefers to deflect attention for accomplishments to others. He says any progress comes from group efforts and reaching out to the community for collaboration.

Urbina has been married for 27 years and is the father of two children.

“I have a very rich life,” Urbina says, “I’m really glad to be back in Denver. I get to do the things that I really enjoy, which is working with a variety of people and trying to improve the health of an entire community.”