Neurology and the Magic of Music 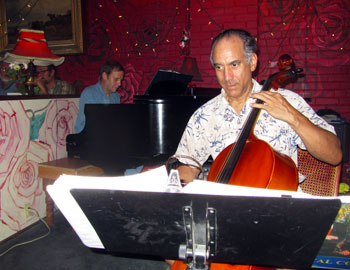 Every few weeks Chris Filley, MD, trades his suit and reflex hammer for jeans and a tip jar, playing piano for the Sunday brunch crowd under a canopy of twinkling lights at a hip Denver eatery.

Playing a set that skips centuries seamlessly, bopping from Bach to the Beatles before moseying on to Miles Davis, few know that

Filley is a practitioner of behavioral neurology.

“Music is a product of the brain just like any other behavior,” he says.

An intricate dance of sight and sound meeting motor skills, making music is a tangle of movement controlled by the brain. But, for Filley, there’s far more to know about how the brain is organized to produce those sounds.

Classical music, with its strict, predictable sequences engages the dorsolateral prefrontal cortex of the brain, which controls planning, organizing and regulating. Jazz, with its riffing and improvising, relies more on the medial frontal cortex responsible for functions such as stimulus-independent thought and spontaneity.

“With Beethoven, you play what the score directs you to play,” Filley says. “But with you have more flexibility.”

Filley, professor of neurology and psychiatry at the University of Colorado School of Medicine and director of the behavioral neurology section, has dedicated his to medicine and music, finding surprising links between these two passions

e much of the brain’s involvement in behavior, including the complex phenomena of music, remains a mystery, Filley says that measurable changes in different brain regions can be shown to depend on the genre of music being played.

Filley says his father, Giles Filley, MD, a School of Medicine pulmonologist and

and pianist, instilled a love of medicine and music. Growing up, his house hummed with music.

Filley was 8 years old when he began playing clarinet. In 1964, when he was 13, the Beatles rocked his world. With his older brother Josh, he plunked down $6 to see the band at Red Rocks.

“We were totally hooked,” Filley remembers. He soon swapped clarinet for guitar, later adding piano to his repertoire.

In the early 1970s, while at Williams College in Massachusetts, he played in a band.

Those were heady times for Filley and the nation. He considered becoming a journalist, a teacher, a musician. But his father’s influence echoed; he chose medicine, figuring he could help more people in that profession

e at Johns Hopkins School of Medicine, Filley considered internal medicine before pursuing neurology. “How does the brain allow us to be human?” he wondered

e returned to CU for his neurology residency, and then went to Boston for a fellowship in behavioral neurology. He joined the School of Medicine faculty in 1984.

As a second-year medical student, Benzi Kluger, MD, looked to Filley as a mentor and for inspiration. He found a kindred spirit also

r, now an associate professor of neurology at the School of Medicine, describes Filley as a patient listener who encouraged a philosophical approach to the study of neurology and to life in general.

“He would tell me to think broadly and live broadly,” says Kluger, who plays rock guitar and bass

y met Green in the late 1970s through his older brother, who became a professional musician, and then again by chance when he was a neurology resident and Green was a patient with multiple sclerosis. Later, Green introduced Filley to jazz, thus opening a new musical world for him. Local Color’s sets include a blend of classical, rock, jazz and some original compositions.

“Either one is great by itself,” he says, “but together they are all the more fascinating.”