"He Loved Every Day Working for This School"

(November 2014) Friends and family of E. Chester (Chip) Ridgway, III, MD ’68, MACP, gathered in August to pay tribute to a man whose work as a physician, researcher and teacher is recognized around the world, and whose life was devoted to his children, his family’s Wyoming ranch, and the fellows and colleagues he mentored throughout his career.

Ridgway, a Distinguished Professor of the University and the senior associate dean for Academic Affairs for the past 20 years, died July 31, just a few weeks after being diagnosed with pancreatic cancer. He was 72 years old.

Dean Richard Krugman, MD, told the hundreds who gathered for the ceremony that Ridgway deserves credit for the school’s successful move to the Anschutz Medical Campus.

“Much of what we have today is because of his work,” Krugman said. “Much of the credit goes to people like Chip who actually had the fortitude to pay attention to the thousands of details that made it happen and got it done years ahead of the plan. When academic administration is done well, it is invisible. He was a critical part of our infrastructure here and we will miss him an enormous amount, a great deal.” 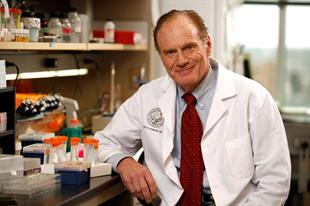 Ridgway succeeded because he focused on the people around him, and that included the attention he gave to his children, Krugman said.

“He was passionate about furthering the science of endocrinology, about teaching and also about putting Colorado on the map as a top medical institution; this you all know,” said his daughter Emily Ridgway, MD. “But I also want to tell you that he was equally immersed and devoted to his role as a father and as a family member and as a patriarch of his extended family. Dad was larger than life as Hap (Chip’s brother) said. Magnetic. He galloped through life.”

She recalled that her father scattered soot by the fireplace and left gifts on the roof of the house one Christmas when she and one of her brothers began to show doubts in the existence of Santa Claus.

“We all know how devoted Dad was to his profession and how much it meant for him to be part of the University of Colorado,” she said. “We grew up with slide carousels on the countertop of his talks, and grant applications or drafts of article submissions on his lap during Broncos games for commercial breaks.”

Ridgway grew up in Cody, Wyo., and followed in his father’s footsteps by becoming a doctor. Ridgway completed a program and a philosophy major at Dartmouth College and came to the University of Colorado for medical school. Internship, residency and fellowship programs followed at Massachusetts General Hospital in Boston. He served two years in the Navy as a medical officer in San Diego and then returned to the faculty of Harvard Medical School and to Massachusetts General, where he headed up the Thyroid Unit.

He came back to the West when he joined the University of Colorado School of Medicine in 1985. Part of the reason was his own desire to be in the mountains and close to Cody. He wished the same for his children who, as he said, “were preteens and they were getting a little too used to being Boston people.”

Paul Bunn, Jr., MD, who, like Ridgway, is a Distinguished Professor of the University, recalled Ridgway’s competitive spirit in tennis matches in Evergreen, bicycling up Mount Evans and skiing in Aspen, where Ridgway persevered even though his boot was cutting up his ankle.

“Chip was a tough guy and he pursued excellence in every endeavor,” Bunn said.

Bryan Haugen, MD, head of the Department of Medicine’s Division of Endocrinology, Metabolism Diabetes, a position Ridgway held from 1985 until 2007, said patients adored him and that he was a generous mentor and colleague.

“He loved every day working for this university and this school,” Haugen said.