From Cancer Survivor to Inspiring Caregiver

( 2013) Brandon Nuechterlein’srelationship with Children’s Hospital Colorado started in dramatic fashion 15 years ago when he arrived emaciated and nearly after a 26-hour flight from Asia.

A few weeks earlier, Nuechterlein’s mother had called Children’s from Phuket, Thailand, where doctors had ruled out the normal diagnoses of dengue fever and malaria.

“Leukemia,” the hematology-oncology fellow at Children’s had said, recommending a biopsy to confirm the diagnosis

s the journey began to Denver, the family’s home before moving to Thailand to be near his grandmother when Nuechterlein was 6 years old. He went through two years of chemotherapy, infections and a bone marrow transplant (BMT) before coming to Children’s three years ago as a physician assistant to work with kids who often remind him of his younger self.

There was nothing in his young life to prepare him for such an extreme illness. Being raised in a then-remote area of Asia, he says his childhood was “like Robinson Crusoe.”

When he was 15, he began having back pain and but dismissed it as a rugby injury until the symptoms worsened.

“I went from being a triathlete to not being able to take a flight of stairs,” he says.

Armed with Tylenol codeine, weighing 100 pounds at 5-foot-11, Nuechterlein became so ill on the flight to Denver that the crew threatened to land in Las Vegas. “They didn’t want me dying on the plane,” he remembers.

Fire trucks and an ambulance met him on the tarmac, and he doesn’t remember much until he woke up with five central lines in his body.

Complications followed. There was some confusion as to what type of leukemia he had because early treatments in Thailand skewed the results. The verdict: leukemia—very rare and extremely aggressive.

Cord blood in Italy was a match, but because he was adult-sized, there weren’t enough stem cells to cure him. He was fortunate to be one of the first to take part in a clinical trial in which doctors grew more cells to transplant.

“I did well,” he says, despite developing graft-versus-host disease, a condition where your new immune system recognizes your body as foreign and attacks it. “And because you get the person’s immune system, you also get their allergies. I made three trips to the ICU before I realized I had a peanut allergy.”

As traumatic as the hospitalization was, Nuechterlein, now 30 years old, became intrigued and decided he wanted a career in BMT. 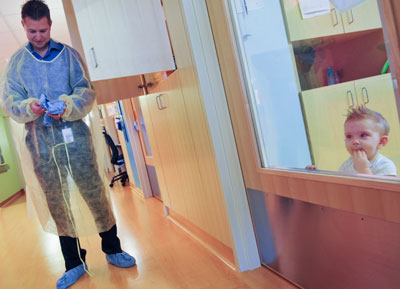 “It’s awful being sick, but it isn’t awful being here,” he says. “After seeing what the doctors did, their dedication, I knew I wanted to be involved.”

Enduring a near-death experience during treatment in Thailand eliminated his fear of dying and helped him warm to his caretakers in Denver.

“I was floating above everyone, and they were all running around like crazy. It’s just like you hear about; there were lights in the corner. I remember deciding this is really going to be terrible, but I’m going back. I was slammed into instantaneous pain so bad that you cannot imagine. After that, I knew I would live.”

The lack of fear continued into recovery, to his doctors’ consternation.

“The doctors teased me that they would take away my graft because I was jumping out of airplanes, (skiing) down mountains at 50 mph,” he says.

As soon as he was well enough to get his GED, he started classes at CU Denver, then, two weeks after graduating with a degree in psychology, he started on his physician assistant degree at Anschutz Medical Campus. He chose the PA route over an MD because he knew it would mean more time with patients.

Doing his rotations at Children’s was like coming home. “All the doctors here have treated me at one time or another.”

Now he runs the long-term survival clinic at the Center for Cancer and Blood Disorders. He tells every patient about his own disease and recovery.

“It gives them hope. It’s one thing to hear doctors talk about the numbers and survival rates, and it’s another thing to meet me. I had a very poor chance of survival. I was way sicker than most of them are. And it all turned out great in the end.”