A Funny Thing Happened on the Way to the ER 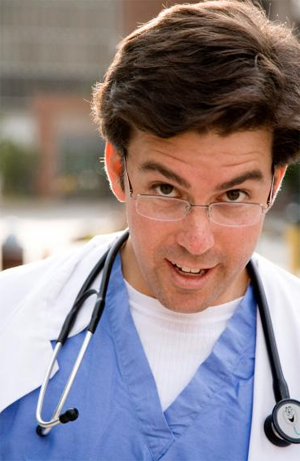 (May 2, 2011) Brad Nieder, a pleasant-looking young doctor in suit and tie, takes the stage before a crowd of 2,000 at a medical convention in Orlando. The topic is how laughter is the best medicine.

Nieder launches a tale of his health care softball team going to the championship and how he painfully dislocates his shoulder while sliding into a base during a game. Then, he nails it.

The crowd roars. Then he tells how his team ultimately lost to a bunch of ophthalmologists who kept shouting "Good eye!" to the batters.

Nieder’s amiable style is reminiscent of early Jerry Seinfeld, with sharp timing and the element of surprise. Just when you think you know where a gag is going, it veers into the unexpected. Nieder knows a thing or two about veering.

Growing up the son of a doctor in the Denver suburbs, Nieder had a childhood free of the demons with which many funnymen wrestle. He studied comedians on TV, taping favorites like David Letterman and Howie Mandel. As an undergrad at Stanford University, he was a founding member of the improv group the Simps.

But then college graduation loomed and he had to pick a path. Medicine was a practical decision. His parents would be pleased, he could make a good living and he would be helping others. Still, early on at the University of Colorado School of Medicine, he noticed that he just wasn’t as consumed with medicine as were some of his classmates. At night he hit the Denver comedy clubs, doing stand-up comedy on open microphone nights.

Nieder confessed his doubts to Dr. John Repine, associate dean for student advocacy. Repine, a professor of medicine, pediatrics surgery, reassured him that it was OK to have other talents and interests. Often, Repine said, that made for better doctoring. "Keep going," Repine remembers saying, encouraging him to continue in medical school and explore comedy on the side. Nieder recalls that Repine also told him he was "riding two horses" and advised, "don’t give up your other horse."

Nieder graduated from CU medical school in 2000 and began a residency in emergency medicine in Richmond, Va. There was no time for comedy. After completing his internship and earning his general practitioner license, Nieder veered. He decided not to continue with emergency medicine—to the dismay of his parents, fiancée (now wife) and most everyone he knew.

One exception was Scott Friedman, a motivational humorist and longtime friend from Denver. Friedman urged Nieder to use his medical degree and comedic talent to carve out a niche as a speaker who mixed health advice with humor.

Nieder branded himself "The Healthy Humorist." He is thought to be the only licensed doctor in the country doing convention comedy fulltime.

In January 2003 Nieder debuted in the back room of a Macaroni Grill at a breakfast meeting of the Cherry Creek Rotary Club. Payment was free food and a Rotary coffee mug. Today Nieder is steadily booked around the country, logging more than 40 appearances a year. He is married and has two young children.

"Initially it was scary. It was not the safe path," admits his wife, Sara. "But he is so blessed to have found something he loves. Any doubt has turned into admiration."

Tucked into every performance is the science that shows how a good belly laugh can reduce stress and lessen pain. "And there are always some wellness tips, too, like the reminder that crooning ‘Happy Birthday’ while washing your hands ensures you’ve scrubbed long enough.

"I’m a germaphobe, though," Nieder says, "so I always sing ‘The Wreck of The Edmund Fitzgerald.’ It’s like 10 minutes long. So it’s a bit odd in public restrooms. I get a lot of strange looks. But I’m always very clean!"

As he closes each performance he discloses he doesn’t see patients. But that doesn’t mean he’s left medicine.

"The way I see it," he says, "I am still practicing medicine. It’s just in an unconventional way. I have no regrets. There are plenty of good ER doctors out there as well as docs of all specialties. But I’m the only one filling this role, so I believe I’m doing what I should be doing."