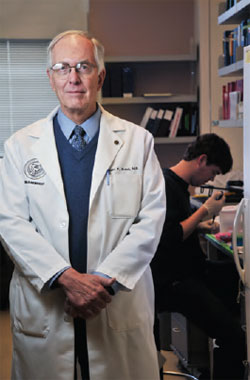 As a young rheumatologist in Washington state in the ’70s, Bill Arend often found motivation in his frustration.

By day he would visit patients riddled with arthritic pain and deformities of their joints, some so severe they were confined to wheelchairs or couldn’t use their hands. He had some medications—such as injections of gold salts or steroids—to ease their suffering, but they often treated only the symptoms rather than the root cause and came with a host of unintended consequences.

So when Arend wasn’t seeing patients or teaching classes at the University of Washington School of Medicine, he would retreat to the lab in search of a better answer.

“We were stuck between a rock and a hard place, between trying to make them feel better and knowing they were going to suffer severe side effects,” he recalls. “As a physician, I took care of so many sick people and was so frustrated when I couldn’t help them. As a researcher, I had a deep curiosity about .”

Those dual drives have served Arend well. His discovery of an anti-inflammatory protein called interleukin-1 receptor antagonist (IL-1Ra ) in the 1980s led not only to a new commercial drug used to treat arthritis and other but also to a better understanding of autoimmune and inflammatory diseases as a whole, from diabetes to heart attack and stroke.

Since his arrival at the University of Colorado School of Medicine in 1983, he has earned a reputation as not only a groundbreaking researcher, but also as an outstanding clinician and a motivating professor. Recently retired from the active faculty, he continues to see patients two half-days a week—something he has prided himself on throughout his 40-plus-year career. In recognition of his achievements, he was named a Distinguished Professor of the University of Colorado in 2009.

“In spite of the international and national recognition that his discovery has brought him, Bill has remained a modest, thoughtful, unselfish, and conscientious participant in this academic community,” wrote colleague Richard Johnston, MD, a professor of pediatrics and associate dean for research development at the School of Medicine.

Love of medicine runs in the family

One of three boys raised on a farm in upstate New York, Arend knew as a teen that he was destined for a career in medicine. He loved people and and saw the field of medicine as a great way to combine the two passions. Arend saw himself following in the footsteps of his grandfather, a family doctor.

After graduating from Columbia University School of Physicians and Surgeons in New York City in 1964, he headed to Seattle where he would complete his post-graduate training in medicine and rheumatology and serve on the faculty for 10 years. He became deeply curious about how inflammatory joint diseases develop.

At the time, little was known about the mechanism behind arthritis and other rheumatic diseases, which impact the joints, skin, lungs and other organs. Some thought they were fueled by hormone imbalances; others assumed they were caused by infectious agents.

But what they did know was this: The tissue lining the joints of rheumatoid arthritis sufferers was riddled with inflammatory cells that would invade the cartilage and bone, wreaking havoc on the body.
The likely culprit, Arend and others would come to realize, was an excess of cytokines—molecules that are mobilized in the body to fight infection but, if made in excess, can cause inflammation and release tissue-destroying enzymes. One called interleukin-1 (IL-1) was particularly abundant in the synovial tissue lining the joints of RA patients.

“We knew that, essentially, the joint was being attacked by the tissue,” Arend says. “The next step was to try to figure out what was stimulating cells to produce IL-1 in excess.”

It was in the pursuit of that question in the early 1980s that took Arend to England on a sabbatical. As he tried to coax cells in the lab into generating the troublesome molecule, he observed something entirely different: a protein that appeared to keep IL-1 effects in check by acting as a receptor blocker.

“He had discovered a counter-regulatory mechanism that the body used to turn off inflammation,” explains Gary Firestein, MD, chief of the Division of Rheumatology at University of California San Diego School of Medicine. “It was an entirely new concept and it provided an important clue in understanding how inflammation is regulated in the body.”

Arend’s discovery, which would be dubbed “interleukin-1 receptor antagonist” (IL-1Ra), marked the first time anyone had described a natural inhibitor to any member of the cytokine family. And, while it would take years, its impact would be felt by patients with a broad spectrum of diseases.

In 2001, Boulder biotech company Amgen marketed a recombinant, or cloned, version of IL-1Ra called anakinra, or Kineret®, for use in the treatment of rheumatoid arthritis. To date, worldwide sales have amounted to $600 million. Some of the royalties went to the University of Colorado and were used to fund an endowed chair in rheumatology research.

But the story did not end there.

With a new tool for blocking the effects of the cytokine IL-1, researchers around the globe were able to forge ahead toward a greater understanding of the inflammatory process.

“It turned out to be a marvelous agent for use in animal models of disease and in cell culture studies. Now we had a way of inhibiting IL-1 to explore its relative role in disease processes,” says Arend, seated next to eight file cabinets packed with research that emerged out of his discovery. “It’s been like raising a child and sending it out into the world where it develops its own life.”

In the end, Arend says, other emerging medications—such as tumor-necrosis factor inhibitors—proved to be more effective than Kineret for treating rheumatoid arthritis. However, Kineret ended up having even broader applications for a host of other diseases.

Kineret and now other IL-1-blocking drugs have proven to be excellent therapies for an array of immune and inflammatory disorders in which excess IL-1 is believed to play a role. These diseases include a form of arthritis in children or adults called systemic onset juvenile arthritis, or Still’s disease, and a mysterious group of auto-inflammatory diseases in children.

“In the beginning it opened up a whole new therapeutic area for a small number of patients. But that was just a tip of the iceberg,” says Firestein. “There are many diseases that work this way.”

With his “child” grown and gone, Arend has moved away from IL-1Ra research in recent years, shifting his focus back to a subject that first interested him in those post-doctoral days in Washington: the role of immune complexes and complement in inflammation.

Meanwhile he continues to edit textbooks and pursue academic interests while spending more time with his family, traveling the globe and looking back on his career with deep satisfaction.
“It is the dream of every clinical investigator to work on something that will lead to a treatment that helps patients,” he says. “I am one of the few to have seen that dream realized, and in ways that no one ever anticipated. It’s been fun to watch the story develop.”