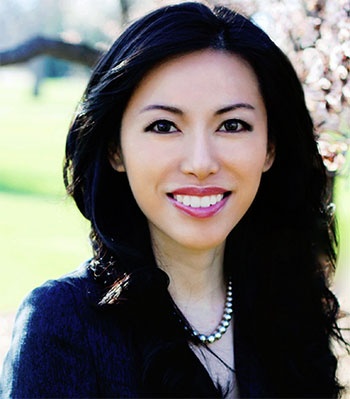 (May 2015) April Armstrong’s office on the Anschutz Medical Campus is unblemished: No stray papers scattered around, no piles of books on shelves, no computer on the desk, nothing hanging on the walls.

She shrugs off questions about it with a simple answer.

“Everything I need is in here,” she says, pulling a laptop out of the bag she totes around campus. The response is apropos for a physician who is quickly becoming a leading expert in the practice of teledermatology.

Armstrong, MD, joined the School of Medicine in 2013 as associate professor and vice chair of clinical research in the Department of Dermatology, and she has quickly made her mark with two high-profile research studies published in JAMA Dermatology.

The other research study evaluated the use of email and online communications in treating patients with eczema, finding that online consultations for ongoing care were just as effective as in-person visits. That report quickly captured media attention with reporters hailing the “selfie” solution to a condition that affects millions of people.

The use of telemedicine is particularly crucial in locales where a shortage of physicians requires long trips for what are otherwise routine visits to the doctor’s office.

“Patients often report having to drive long distances and take time away from work and school to care for their skin,” Armstrong says.

That’s more than an inconvenience. It’s a cost to the patient and a cost to the community, so Armstrong designed a study to figure out whether digital images transmitted online would serve patients as well as regular in-office visits.

“We’re never going to give up face-to-face interactions,” Armstrong says. “It’s valuable to be in the same room, to touch. What we’re doing is diversifying the way we practice. I don’t advocate replacing the human touch.”

To compare the effectiveness of online treatment with in-office visits, Armstrong and her fellow researchers recruited 156 adults and children with eczema who lived near Sacramento, Calif., and who had access to the Internet, computers and digital cameras.

All patients saw their dermatologists in person for the initial visit. Then half of them received follow-up care in office visits while the other half sent photographs of their eczema to the dermatologist, who then recommended treatments and prescribed medications electronically.

Both groups measured the severity of eczema through a standard patient questionnaire. Higher scores indicated greater severity with a maximum possible score of 28. After a year, the patients in the online group had dropped an average of 5.1 points and the in-person group declined an average of 4.9 points.

Further, the study team assessed the photographs to determine the severity of , with scores of 0 for “clear” up to 5 for “very severe.” The team determined that 38.4 percent of the online group achieved scores of 0 or 1, compared with 43.6 percent for the in-person group.

Based on those scoring systems, the differences between the online and in-person consultations after one year were so small, they were considered nonexistent. While the patient outcomes were remarkably similar, the impact of treatment for the patients is significant.

“Skin diseases are not as well publicized as others,” Armstrong says. “It won’t kill you, but it can ruin your life.”