In Villages Where Antibiotics are Three Hours AWay, Andrew Brookens Battles Chagas Disease 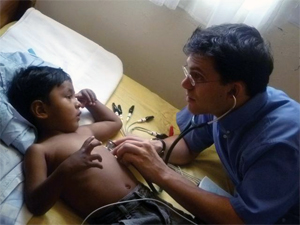 (May 2, 2011) When Andrew Brookens was in Bolivia with the Peace Corps a few years ago, he became close with a local priest, Father Rene Martinez. Martinez was 35 when he died of heart failure caused by Chagas, a disease so common there that 90 percent of the residents of his village are infected.

Brookens, now a student at the University of Colorado School of Medicine, spent more than six months of this school year in Bolivia fighting the disease by trying to understand barriers to treatment.

"Chagas," he explains, "killed a good friend of mine."

One of the top experts on the disease, cardiologist Sheba Meymandi, helped Brookens with the work he’s doing in Bolivia.

"He is bringing more awareness of the disease and more knowledge of how Chagas progresses," says Meymandi, director of the Center of Excellence for Chagas Disease near Los Angeles.

Brookens grew up in the Denver suburb of Englewood. When his parents talked about his Latino heritage—one side of the family is from Puerto Rico—"that struck a chord," he says.

After graduating in public policy from Duke, Brookens decided to nourish that heritage by going to a Spanish-speaking country. He joined the Peace Corps and served in Bolivia, where his interest shifted from economic development to health care.

"The family I stayed with had infant twins with chronic eye problems," Brookens recalls. "One of the older sons had had a donkey accident. They had to hire a truck to get them to a hospital three hours away for antibiotic eye drops and disinfectant for a head wound."

Back in Colorado, Brookens worked other jobs but kept thinking about the good he might do as a doctor. He came to the CU medical school and began to focus on Chagas.

Chagas, named for the physician who discovered it in 1909, is caused by a parasite called Trypanosoma . The parasite is carried in the feces of an insect, called a reduviid bug, that inhabits adobe and thatched dwellings common in Central and South America. The bug bites humans, often on the face, giving it the deceptively cute name "the kissing bug." Chagas hits hard in Bolivia, infecting 4 million people, Brookens says.

Typically, after an initial flu-like reaction or swelling, symptoms disappear, sometimes for life. But lethal problems can emerge such as dilation or rhythm abnormalities of the heart. Meymandi, a professor of medicine at UCLA’s David Geffen School of Medicine, says the disease is spreading in the United and worldwide.

"There’s a growing awareness of Chagas in the U.S.," she says. "Many blood banks are now testing for it."

The earlier it’s treated, the better the outcome. Yet only 30 percent of patients in Bolivia diagnosed with Chagas complete treatment, Brookens says.

One man, for example, passes out every two weeks from heart damage caused by Chagas. He could get a free pacemaker, Brookens says, but "doesn’t trust having a device in his chest. He has a free solution, but he doesn’t want it." "I know how the bug behaves, I know how the drugs work," he says. "But I don’t know what makes people seek out treatment."

To find out, Brookens got funding from the Robinson Durst scholarship (through the Colorado School of Public Health’s Center for Global Health) and the American Society of Tropical Medicine and Hygiene. His church, Wellshire Presbyterian, also supported him.

Brookens is surveying people to identify barriers to treatment. Early results suggest that some patients feel they lack time to deal with the disease. Also, many victims distrust Western medicine. Brookens recalls a patient who said he would be fine "because the local healer has already provided me with a pig fetus and herbs."

But then there’s Martha Aguayo. When her husband developed Chagas symptoms, she had herself and her five children tested too. She and her 12-year-old daughter have Chagas and are being treated.

"This is the type of case where we can stop the progression," Brookens says. Aguayo now is part of his study. People such as Aguayo—and Brookens—may help save lives.

"If we learn more about behaviors by patients like Ms. Aguayo," Brookens says, "then we can better target interventions."

Read about our 2018 graduates and see the slide show of the celebration.