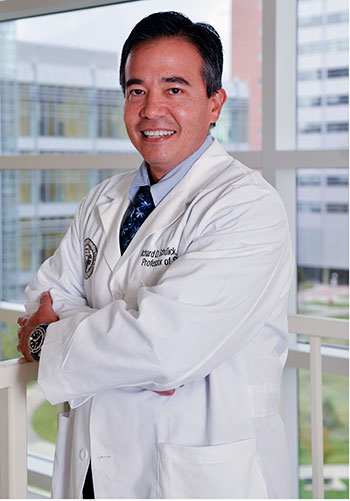 The center already holds a place among the nation’s elite cancer programs and now, with a five-year, $100 million investment by the University of Colorado School of Medicine, UCHealth, and philanthropists, it is poised to grow.

Schulick said he plans to focus on the fundamentals of improving access to care, recruiting elite faculty, and building a clinical trials infrastructure capable of extending new treatments to more people.

“At the heart of everything we do is providing excellent care for patients,” he said. “That also means discovering new cures and teaching the next generation of cancer caregivers. Those three themes are central to our mission, and we won’t deviate from them.”

Schulick said a key goal is making it easier for people to get the best possible cancer care. He said the CU Cancer Center will explore constructing a “much larger and dedicated cancer center” than the present five-story structure on the Anschutz Medical Campus and opening new sites around Denver and the state to “bring services and clinical care closer to our patients.”

“It’s my dream to somehow enable this vision,” Schulick said. “All excellent leaders advocate for their organization, and I believe this is the right thing to do.”

Leaders on the Anschutz Medical Campus offered their support for Schulick.

“We are incredibly fortunate to have a leader as talented as Dr. Schulick already on our faculty and ready to enhance the high-quality research and care provided by the faculty and staff of the CU Cancer Center,” said John J. Reilly, Jr., MD, dean of the School of Medicine. “Dr. Schulick will be implementing an impressive plan to extend the reach of the cancer center, further integrate our research and clinical programs, and improve the quality of life for the patients we serve.”

“The CU Cancer Center is a nationally renowned leader in cancer research, and hundreds of their innovative clinical trials are available at multiple UCHealth locations including our hospitals in northern Colorado, metro Denver, and Colorado Springs,” she said.

The Cancer Center has firm foundations. It’s a longtime National Cancer Institute-designated Comprehensive Cancer Center – the only one in Colorado – a reflection of its excellence in research, advanced treatments, and patient outcomes. Schulick also cites the Cancer Center’s close academic medical center ties with UCHealth University of Colorado Hospital, Children’s Hospital Colorado, and the VA Eastern Colorado Health System, as well as the CU Anschutz Medical Campus, CU Boulder and Colorado State University, as evidence of its current strength and future promise.

“We have top hospitals for care of both adults and children,” Schulick said, referring to top national rankings in U.S. News and World Report for both UCH and Children’s Hospital Colorado.

New treatments that focus on the immune system have garnered much attention – including at the CU School of Medicine, which launched the Human Immunology and Immunotherapy Initiative with a $20 million investment. Schulick said the search extends to finding new drugs and compounds that are safe and effective for varieties of cancer and also considers not only length of life but also quality of life in treating patients.

“If we value one of those without the other, it doesn’t make sense,” Schulick said. “Palliative care, for example, is extremely important. All the things that we do to care for patients have to make sense. That means that aggressive care has to be reconciled with the side effects of care.”

The urgency of addressing these and other complex medical problems increases every day, Schulick said. He pointed to statistics that show more than 1.7 million new cases of cancer in the United States in 2017, with nearly 1,700 people dying from the disease every day. Some 15.5 million Americans in 2017 had a history of cancer.

“It’s the most important problem of our time,” Schulick said. “We’ve gotten so much better at treating other conditions like heart disease and infections that people are living longer. If you live long enough, you’re prone to cancer. It’s hard for most of us to name one person who hasn’t been touched in some way by cancer.”

The breadth of the questions offer additional challenges for Schulick, who has led impressive growth in the Department of Surgery. Schulick joined the University of Colorado School of Medicine in 2012 and he is the Aragón/Gonzalez-Gíustí Chair of Surgery. He will continue in that role in addition to serving as director of the CU Cancer Center.

Under Schulick’s leadership, the Department of Surgery has doubled in size, recruiting top talent from across the country and building a strong program that now includes more than 180 faculty and 78 research staff and that currently provides training to 135 fellows and residents.

In 2017, the Department of Surgery handled 17,375 operating room cases and 86,365 patient visits. Research activity in the Department was also robust, with $22.3 million in total funding, 27 active clinical trials and 425 peer-reviewed publications in 2017. During the past five years, total grant awards have increased 145 percent.

Schulick is also a practicing surgeon specializing in diseases of the pancreas and liver, including cancer, and has no plans to scale back his time in the operating room.

“That’s a core piece of who I am,” Schulick said. He pointed to photos on his office wall of fellow surgeons and mentors John Cameron, MD, and Sir Murray Brennan, MD, who trained him at Johns Hopkins University School of Medicine and Memorial Sloan Kettering Cancer Center, respectively. Both, he said, instilled in him an essential lesson: Don’t abandon the surgical suite for the C-suite. Even now, when Schulick shared the news of his new role as director of the Cancer Center, Cameron wrote in reply: That’s great, but keep operating.

Schulick said he sees his dual roles as complementary rather than conflicting. “A significant portion of our activity in the Department of Surgery is related to cancer,” Schulick said. “It will be my charge in the new position, obviously, to lead the whole spectrum of cancer care in discovery and education. But my specific experience will benefit my ability to lead.”

To keep up with it all, Schulick can also draw on at least two other pieces of his education: the MBA and a bachelor’s degree in engineering. On the business side, he observes that his MBA training is important to balancing the need for innovative medical research, discovery and treatment, and fiscal prudence, while engineering taught him problem-solving skills.

“We’re all problem-solvers,” he said. “When we’re presented with a problem, we check what’s available as resources to take care of it. That’s what I do all day, in the OR, in administration, in research, in figuring out the best way to teach. I apply the principle all the time in medicine, which is a blend of art and science. We need engineering skills in medicine, but when we take that too far, we have to rely on the art.”

​A version of this article originally appeared in UCHealth Today in July. Mark Couch contributed to this report.