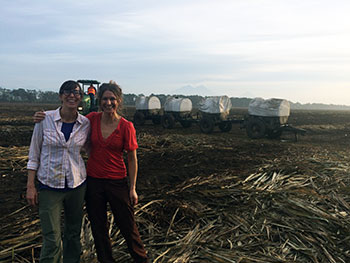 The first of its kind in the nation, the fellowship was spearheaded by Jay Lemery, MD, associate professor of emergency medicine and co-author of “Enviromedics: The Impact of Climate Change on Human Health.”

The program, which welcomes its second fellow this summer, received funding from the Denver-based Living Closer Foundation. During the past year, Sorensen has surveyed neighborhoods in Puerto Rico to study the aftermath of Hurricane Maria; made treks to the Syria-Lebanon border to examine the role of environmental change on women’s health; walked through sugar cane fields in Central America where heat stress may be a culprit behind workers’ increasing rates of kidney disease; and attended numerous conferences and board meetings across the nation. Lemery said the threat to human health from climate change — natural disasters such as heat waves, wildfire, hurricanes, and rising oceans as well as increases in vector-borne disease and air-quality degradation — is clearly borne out by science.

However, physicians have been largely absent from the dialogue, and consequently, from the policy decisions that drive meaningful change.​