Cheryl Ackert-Bicknell searches for the secrets to healthy bones 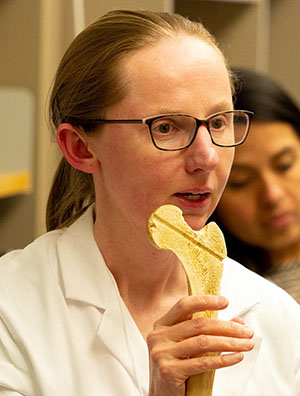 (October 2021) Cheryl Ackert-Bicknell, PhD, seems perplexed when asked why she is so dedicated to understanding how bones work the way they do because the answer is so obvious.

“Because bone is the coolest organ system in the body” Ackert-Bicknell says. “Bone gets so underappreciated. Bone is an endocrine organ. It makes hormones. Bones make hormones that control whole body energetics.”

After years of study and many collaborations with scientists and surgeons, there is still so much more to learn.

This summer, Ackert-Bicknell, associate professor of orthopedics, was awarded another grant by the National Institutes of Health to expand the understanding of how bones work and to find even more evidence about how bone is the coolest organ system in the body.

With this $3.4 million grant, Ackert-Bicknell, associate professor of orthopedics at CU School of Medicine, plans to map the key genes and pathways involved with bone cell activity. Using that information, researchers hope to find targets for more effective treatments to counter bone loss.

Bone is in a constant state of remodeling, Ackert-Bicknell said, and her study is designed to look at cells known as osteoblasts, which work in teams to build bones. When a healthy body is functioning properly, osteoblasts work in balance with other cells called osteoclasts to maintain sufficient bone mineral density.

“In the process of walking from your car to here, you did microcrack damage to your bone,” Ackert-Bicknell explains. “The osteoclasts’ job is to home to that site of the microcrack, eat a hole out all the way around that microcrack and the osteoblast comes and fills that in. That’s called normal bone turnover. That’s most of your life. If the osteoclasts go haywire and there is insufficient building of new bone, that’s osteoporosis.”

Current therapies to cause the body to build the right amount of new bone are limited. These therapies can only be used for a limited time – one to two years – and none can be used in children. There is a need for better therapies, Ackert-Bicknell said, but they cannot be developed without improved understanding of how a healthy body gets bone density just right.

That’s where Ackert-Bicknell’s study comes in. She plans a comprehensive analysis of how the genes influence the process. She will conduct a genome-wide association study that seeks to identify genetic variations that are associated with osteoblast function and bone mineral density.

“Osteoblasts build bone. Osteoclasts chew up bone. And that’s how I always teach it: Blasts build and clasts chew,” Ackert-Bicknell says. “Osteoblasts do two things when they build bone. They make a protein matrix and then they mineralize that matrix. For that to be accomplished, the osteoblast has to get to the right place, and it has to proliferate. So, it is migrating, it is proliferating, it is making matrix, and it is mineralizing that matrix.”

Previous studies of osteoblasts have shown that its characteristics are highly heritable, or transmissible from parents to children. But how osteoblasts, which are complex and highly regulated cells, form and do their work is not well understood. What might appear to be a small change can have significant developmental consequences. Ackert-Bicknell cites an example of how knocking out a single gene in one type of bone cell can result in an obese mouse.

“You can actually knock out a gene, just in these osteoblast bone cells, and get an obese mouse,” she says. “In that cell only. It is the only cell in the whole body that makes that gene, and you end up with an obese mouse. This just shows how bone is tied into all of physiology.”

To get a better understanding of those connections, Ackert-Bicknell’s new study will look at the network of all the genes expressed in the osteoblast and their relative expression in different contexts of genetics.

“To do this, we must compare bone image after bone image to identify variations that could be meaningful in relation to the genetics,” says Douglas Adams, PhD, associate professor of orthopedics, who has worked with Ackert-Bicknell on previous studies that underpin the work in this new award.

Adams is also working with Ackert-Bicknell on another NIH grant studying how the leading treatment for osteoporosis might have variable efficacy because of genetic differences between patients. To conduct such studies, researchers grind through thousands of data points to discover links that have yet to be uncovered. By identifying those unknown connections, the team hopes to discover new ways to treat disorders of bone mineralization.

“It’s sort of along the lines of looking under the streetlamp for your keys,” Ackert-Bicknell says. “As long as your keys fell down where the lamp is shining light, you’ve got a good chance of finding them. In our work, we are looking outside of the streetlight for the things we haven’t studied before.

“Let’s face it, what we know now isn’t giving us enough drug targets, enough information. It isn’t helping us. The most unique pathways and the ones that are going to get us drugs are not the ones we have already studied.”

This latest study builds on a series of projects in Ackert-Bicknell’s group.

With Adams, Laura Saba, PhD, associate professor at the CU Skaggs School of Pharmacy and Pharmaceutical Sciences, and others, Ackert-Bicknell is evaluating bone quality and exploring the genetics of quality because the tools used to look at patients’ bones have limits in what they let clinicians see.

The DEXA scan, an imaging test that measures bone density, is useful in showing the thickness of bone, but the scans don’t show the composition of the matrix within the bone. Understanding the matrix is critical to understanding the strength of the bone. That’s why researchers are focusing on the genetic factors that contribute to building that matrix.

While multiple factors contribute to overall patient health, preventing and healing fractures is critical for improving patients’ quality of life and, in many cases, saving their lives. Current therapies for fractures fail too frequently, Ackert-Bicknell says, so continuing to rely on them instead of looking for new treatments is insufficient to meet the needs of patients.