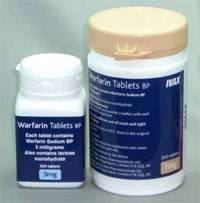 (May 2012) Long before personalized medicine, a drug that commonly was used to kill rats and mice given to the president of the United States to help save his life.

Dwight Eisenhower, while golfing in Denver in 1955, had a heart attack and was hospitalized in the Fitzsimons Army Hospital, now known as Building 500 on the University of Colorado Anschutz Medical Campus.

As part of his treatment, “Ike” received warfarin, which had been approved for use as just the year before and went on to become one of the most widely prescribed drugs in the world.

Today, warfarin, commonly called by the brand name Coumadin, is caught up in the discussion about personalized medicine.

That’s because decades since Eisenhower’s hospitalization, dosing of warfarin was a matter of closely monitored trial and error. Today, the dose typically starts at 5 mg and is adjusted depending on how the patient responds during the following week or so as the warfarin takes full effect.

But research in the last decade showed that variations in two genes, CYP2C9 and VKORC1, can predict the correct warfarin dose, especially for people who need a lot or just a little of the drug.

In 2009, The National Institutes of Health (NIH) trumpeted the findings as well as a clinical trial in a press release that declared, “These efforts showcase NIH’s firm commitment to building a future of personalized medicine—a future in which doctors will be able to prescribe the optimal dosage of medicine for each patient right from the start.”

Yet, today, genetic tests for warfarin dosing are the subject of spirited debate. The issue is not whether the genes help predict the right dose. They can.

The issue is whether that matters.

“What’s not clear is whether the testing improves patient outcomes,” says Kathryn Hassell, MD, a professor at the CU medical school and head of the anticoagulation clinic at of Colorado Hospital.

So far, studies that looked at outcomes such as bleeding or the time it takes to reach a therapeutic dose have found no significant benefit to being guided by the genes, according to Hassell, whose clinic tracks some 650 patients at any given time.

Hassell says that because it takes warfarin days to kick in, it’s safe and simple—and less expensive—to monitor new patients to see if the dose is right.

“By day two or three of a patient going on warfarin, you’ll know how it’s going,” Hassell says. “We do all this without genetics.”

So, for that matter, did the doctors who treated Ike.