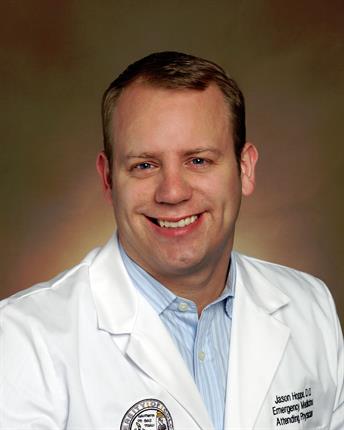 (May 2017) Doctors should be able to fight opioid misuse by relying on online computer data-bases, but so far, existing systems such as online databases that track prescriptions have failed to live up to their promise.

So Jason Hoppe,DO, an associate professor of emergency medicine, and a team of physicians and software developers have developed a pilot project that links the Colorado Prescription Drug Monitoring Program and University of Colorado Hospital’s electronic medical records system.

The federally funded project is an example of how CU Anschutz faculty and researchers could have a national impact on the opioid abuse epidemic, possibly leading to improved software that helps doctors and hospitals across the country ensure patient safety, identify people vulnerable to addiction, and stop prescription medication misuse.

Diagnosing a digital disconnect Software that tracks prescription medications has been available for years. Since 2008, Colorado has had an online statewide database recording when a pharmacy dispenses controlled substances including opioids such as Vicodin and OxyContin, and other potentially addictive medications, such as stimulants like Adderall and benzodiazepines.

Such software allows providers to review a patient’s history before writing a prescription. Hoppe said the databases also could be effective tools for identifying people who visit multiple doctors in an attempt to get prescriptions for opioids or addictive medications.

Providers can use information stored in the database to determine whether patients should be referred for addiction treatment. Databases also can warn doctors if a patient takes a dangerous combination of medications, and in the future, software could perhaps create risk profiles that identify patients susceptible to addiction.

“I think there are positives, and there is evidence that shows they improve patient safety,” Hoppe said. “But there are a lot of barriers to using it.” Hoppe noted that statistics show that nationally doctors check the databases in their states only 12 percent to 20 percent of the time before writing a prescription for a controlled substance.

“We would like to get that number a lot higher,” said Hoppe, who is co-chair of the Colorado Consortium for Prescription Drug Abuse Prevention’s working group focused on improving the database.

A critical element for providers is time. Doctors need to quickly diagnose and treat patients while simultaneously reading and updating electronic medical records (EMR). Switching to a different software program to check the state database takes several steps and distracts both doctors and patients.

“If you’re in a busy primary care clinic or emergency department, and you’re seeing patients for only five minutes, and it takes you five minutes to load the system, you’re unlikely to use it,” Hoppe said. If doctors think a patient needs an opioid painkiller and do not see signs that raise concerns about possible misuse or abuse, they often write prescriptions without checking the state’s database.

An obvious solution would be to integrate the state database and EMR systems. To overcome technical problems, Hoppe and the team worked with Epic, the software company that sells one of the most widely used EMR systems. UCHealth uses Epic’s software and is part of the project.

The initial pilot project is small, Hoppe said, with doctors in the SOM’s Emergency Medicine Department and the University of Colorado Hospital being the first users.

“We have to see how it does, how people like it, and if we can make it solvent in terms of cost,” Hoppe said. The U.S. Department of Justice funded the pilot project, and the software will have to show results before receiving more financial support.

Users at CU Anschutz like the system so far, Hoppe said, and it already has made his job easier. “I use it for 90 percent of patients now that it’s just one click,” he said.