Research Leads to New Conclusions about Link Between suicide and Altitude 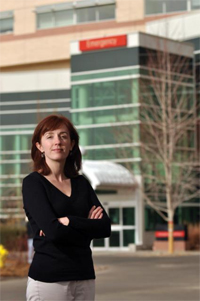 (May 2, 2011) A new study led by University of Colorado School of Medicine faculty and state researchers challenges a popular assumption that altitude is the primary cause of the high rate of suicide in Colorado and other western mountain states.

For decades it has been one of Colorado’s most perplexing medical and societal mysteries: How can a state known for its scenery, high national ranking for health and bragging rights as the fittest in the nation also be a place where so many take their own lives?

The numbers are striking. In 2009, 940 Coloradans committed suicide—more than in two decades, according to state health statistics. More died from suicide than from automobile accidents, breast cancer, diabetes, pneumonia or homicide.

Colorado typically has had a suicide rate up to 40 percent higher than the national rate. In 2007 (the last year statistics were available), the National Center for Health Statistics ranked Colorado sixth highest in the country. Other states with high suicide rates include Alaska, Montana, Wyoming, New Mexico Utah.

This has led experts to speculate that the cause is linked to altitude: Maybe diminished oxygen triggers a chemical imbalance in the brain, or renders anti-depressants and other medication less effective.

But the new study suggests that altitude alone cannot be blamed, says Dr. Emmy Betz, an assistant professor of emergency medicine at the CU medical school. She also holds a master’s degree in public health.

"There is an association but not a clear cut link," says Betz, whose interest in the topic stems in part from in her own family. "There are a lot of other things going on."

Those other things could include a feeling of isolation that can come with living in rural mountain regions, a lack of access to mental health care, a lingering stigma associated with seeking help, and the higher availability and acceptance of owning firearms, she says.

Betz says this is the first research to include that level of detail, which leads to some interesting conclusions. For example, for suicides at high altitudes (above 6,500 feet), friends and families of suicide victims more often reported their loved one was depressed, yet the person who committed suicide was less likely to be getting help.

"It suggests that there are high—altitude victims not receiving care," Betz says.

The study also found that stresses such as job loss, relationship troubles or legal problems were more often contributing factors to suicide at high altitude. Yet those kinds of issues are not necessarily worse in high altitude communities. That leads Betz to suggest that the issue may be lack of a safety net.

The groundbreaking study offers both good and bad news for those involved in combating suicide.

On one it may be frustrating for those seeking an easy, clear cause. But on the other hand, because suicide in the West is attributable to factors other than elevation, it is more preventable, says Dr. Holly Hedegaard, director of the Colorado Violent Death Reporting System and one of the lead researchers in the study. The state Department of Public Health also was part of the effort.

"We need to work to remove the stigma [of seeking mental health care] in culturally appropriate ways," Hedegaard says.

Often people wrongly assume that if a small, rural community is tight-knit, it will be easier for people to rely on their neighbors for help. In truth, though, because everyone knows each other, someone struggling might be embarrassed to get counseling, according to Hedegaard.

Betz acknowledges a certain paradox to their findings. Some of the very things that can make the West desirable, such as the wide open spaces and a tradition of self-reliance, can also contribute to feelings of loneliness and despair in a troubled person.

"It feels like such a waste. Suicide is preventable," she says, "We’ve come such a long way in mental health care but there’s still a long way to go."