'You Guys Saved My Life'

Students and Faculty at the National Western

(May 2015)  Around the corner from the University of Colorado Anschutz Medical Campus health screening booth in the cavernous Hall of Education, a trapper sells skunk pelts, beaver skulls alligator jaws.

Closer in, plus-sized Chevy trucks loom above the crowd, and volunteers for a wildlife rescue group hoist live owls, hawks and other raptors on leather padded arms for the crowd to see.

In the midst of the sensory overload of the National Western Stock Show & Rodeo, a fenced-off corral of students and faculty in white coats welcomes visitors who reflect the diversity of the neighborhood. Tourists, roadies, vendors, urban professionals suburban home-schooling families join ranchers, farmers and cowboys for the annual livestock show and rodeo in Denver each January.

Many are on their way to watch rodeo events when they bump into the CU Area Health Education Center (AHEC) booth, which has been serving stock show crowds for eight years. Others are return visitors stopping by for an annual checkup to compensate for lack of health insurance.

In return, visitors helped students learn basic clinical skills and gave them experience on how to interview and counsel a wide variety of patients.

For some visitors, this is their only health care exam of the year. 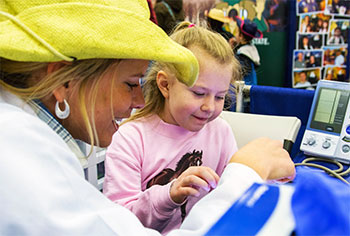 “We had one guy whose (cholesterol) HDL was less than 15,” says Jennifer Hellier, , associate director of programs and director of Colorado Health Professions Development with AHEC. Anything less than 40 is considered at risk. “I’ve never seen that before.”

“He has four kids, and I told him, ‘Look, you have a beautiful family and you need to take care of this and see your health care provider or you are not going to live very long.”

She knows that some people listen.

“We had a guy who came in last year and said, ‘You guys saved my life.’ We’d tested his cholesterol the year before, and it was way too high. He went back to see his health care provider. He lost weight, was prescribed cholesterol medication and was feeling so much better. He said ‘I’m going to come back every year.’”

Lyn White, 61, dropped in for a full run up and learned she probably needed a tetanus shot because the last one she had was in high school. She got a good laugh when Keli Sherman, a first-year physician assistant student, shouting over the wild bird presentation next door, asked if she used marijuana or could be pregnant.

But she did admit to not faithfully eating her vegetables and avoiding exercise in the winter.

“I really came to have my blood sugar checked because I eat a lot of sorbet and ice cream,” she says. “It’s hard to know how you’re doing if you don’t have good health care. You have to look things up on the Internet. Right now I have good health insurance through the state but I missed a year because my husband retired.”

Her husband, however, was not participating in .

Hellier remembers one couple who stopped by for the wife’s health. They were cooks who traveled from show to show often living in a camper. Neither had health insurance. She is diabetic and has high blood pressure and was confused about her medication.

“We told her ‘Come the next weekend because there’s going to be a clinical pharmacist here that day, and he can go over the medications and tell you what each one does and why you should take them at certain times.’”

She insisted that her overweight husband have some tests, too. He was but agreed. “He saves all his money so she can have her medications for diabetes,” Hellier says. “He wasn’t taking care of himself.”

Vendor Edwin Rodriguez came by because stock show paramedics had told him earlier in the day to the hospital for extremely high blood pressure. Rodriguez was pretty sure that wasn’t necessary.

“I’m from Allentown, Penn., and this altitude made my heart and pulse react. Plus, I’d just eaten two 7-11 burritos.” 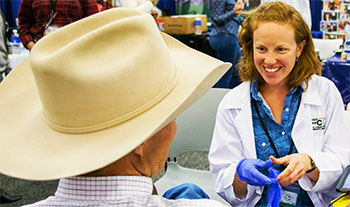 CU students and faculty took his blood pressure again (it was lower that time) but encouraged him to see a doctor as soon as possible. Rodriguez got a flu shot, too.

“I did it because I want Latinos to know that it’s OK to get flu shots. A lot of them don’t.”

Motivating people to make changes is an important part of what the students learn at the stock show. It can be as simple as encouraging a walk after dinner every night, wearing a seatbelt regularly or switching from 2 percent milk to 1 percent, and as difficult as encouraging someone to get an HIV test or a colonoscopy or advising a pregnant woman to stop drinking alcohol.

“I asked an elderly woman about screening tests, but she wanted to know if it was even worth it to get them done,” says Sherman, the first-year physician assistant student. “She said she wouldn’t do anything if she knew she was sick, so what was the benefit of it? I told her it is always better to find out because there are things we can do to help, but ultimately she has to make the decision herself. “

Medical student Emilee Sandsmark had last volunteered at the health screening exhibit in 2011. Now in her fourth year, she felt more at home.

“It’s more fun this year. I’m more confident asking people questions. The first year I didn’t feel like it was my place to say anything or to give advice. It’s an amazing transformation.”