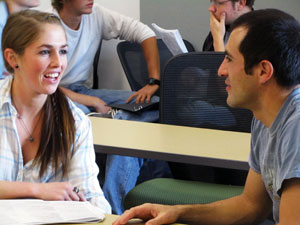 (May 2012) In one classroom, Team Los Gatos and Team Los Pescados are waging a battle of Jeopardy over the word for finger in Spanish.

Across the hall, a more linguistically advanced group of students is taking sexual histories from mentors, asking questions like “Tiene ?” (Do you have itching?)

Once a week for one semester, 50 first- and second-year medical students gather to learn medical Spanish through SABES, the student-led elective that began in 2006 when three medical students decided to help future doctors gain a better knowledge of the language spoken by so many Coloradans.

“They realized that a lot of students weren’t able to communicate effectively,” says Claire Ojima, a SABES student leader who is finishing her second year.

Students are responsible for teaching the classes and taking care of logistics for the elective, including creating the textbook, which was recently accepted by the peer-reviewed AAMC’s MedEdPortal, meaning other universities can now use it as well.

There are four levels of classes: sub-zero (for those with no Spanish background), beginner, intermediate and advanced. Each year there is a waiting list, though student leaders are considering offering more classes.

SABES, in addition to coming from the verb “to know,” stands for Spanish Acquisition Begets Enhanced Service. Advisor Steven Lowenstein, an emergency medicine MD who has been involved with SABES since its inception, says that is exactly why he learned Spanish as an adult.

“Many of my patients are Spanish speaking only,” he says. “At some it occurred to me that I was not doing the best I could do for them, that in order to take better care of my patients, I needed to learn the language.

“Now I can spend more time in the examining room with these patients.  It strengthens my relationship so I can provide better emergency care.”

SABES’ most basic goal is for students to enable them to engage in rudimentary conversational Spanish so they can at least introduce themselves and explain that they cannot speak much Spanish, says Ojima, who learned most of her Spanish in Paraguay health clinics while working in the Peace Corps before medical school.

SABES student leader John Prucha, tells fellow students, “Even if you aren’t comfortable, speak as best as you can."

“It shows patients that you are trying to communicate. Little things like that can help create better patient and doctor relationships,” Prucha says.

While shadowing doctors in rural Mexico before he entered medical school, Prucha discovered the cultural divide was greater than what learning Spanish nouns and vowels could bridge.

“I realized that you can’t use your metaphors from a TV show or a sport. You might have to refer to agriculture,” because many of the patients are farmers, who don’t have access to American media, says Prucha, who is also finishing his second year.

So leaders often ask mentors, many of whom are doctors, to hold cultural talks to educate students on beliefs and customs.

For students interested in continuing their Spanish education past the second year, the university also offers a fourth-year class called SABES II through the company Common Ground.

SABES student leaders are also planning to reach out to Aurora high school students to act as mentors for medical students. If all goes well, the mentorship could become a pipeline program to bring local students into medical school.

“They could feel good about helping medical students learn Spanish, and then—maybe—they start thinking about becoming a doctor, too,” Lowenstein says.