(May 2017) As Richard Davis and David Bentley explain it, the RNA Bioscience Initiative is the center of , the theory of everything and the best way to improve our knowledge of life on Earth.

“RNA biology is a very inclusive field because it has really expanded so much, it’s sent its tentacles out in so many directions,” Bentley said. “It’s got applications that go far beyond basic science. It’s an ideal initiative in a medical school because it’s something that clinicians and basic scientists can unify around and share common interests.”

The RNA Bioscience Initiative is one of the five Transformational Research Funding projects funded by Dean John Reilly, MD, and in its first year, Davis and Bentley have sprinted out of the gate with a far-reaching community-building, faculty-recruiting, apprentice-training, grant-making, technology-testing program.

The excitement of being scientists in charge of crafting an influential new campus program has been focused by the administrative responsibility of the task.

“It’s very exciting and it’s a lot of ” said Davis.

“I feel good about the fact that we’re spreading money for RNA biology kind of far and wide and diffusely about the campus,” Bentley said. “I would also say I feel rewarded that there’s such good interaction with people in medicine, with clinicians. I think we’re making some headway in getting them integrated. We will continue to do that.”

In its first year, the RNA Bioscience Initiative has 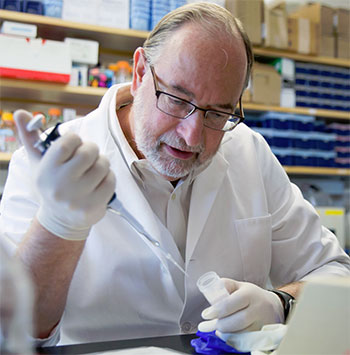 The scope and pace of activity are intended to expand the RNA expertise in the campus research community and to make crucial connections with clinicians and educators. Understanding the basic biology is a necessary step to establishing diagnostic capabilities and therapeutic breakthroughs that will improve the human condition.

“It’s really pretty much all-encompassing,” Davis said. “It spans the whole thing. Probably more than any other field, there have been more surprises in how pervasive RNA is in its regulation of different things and its different functions than in almost any other field.”

Making that point clear is the list of seed grant recipients who are researching kidney disease, breast cancer, ovarian cancer, embryonic cells in neural development and myelodysplastic syndrome. The applications for grants up to $50,000 came from “endocrinology, pathology, infectious diseases, pharmacology, rheumatology, anesthesiology, neuro, I mean it’s everything,” Davis said. “And it really spans a very broad spectrum.” While the reach of the program is wide, Davis and Bentley are attentive to the details in how the RNA Bioscience Initiative manages interactions of participants.

For example, the RNA Club speakers are specifically instructed to engage in “chalk talks” rather than to present projected images on a screen. 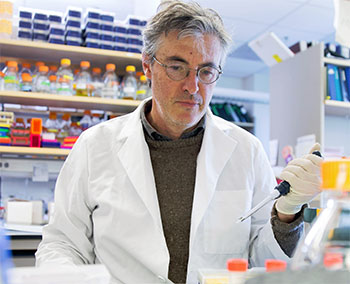 “They’re not supposed to use slides,” Davis said. “They’re supposed to draw. It’s designed to be informal, to engage, and to have more interaction and more discussion.”

And they practice what they preach. In presentations about the RNA Bioscience Initiative to the School of Medicine’s Faculty Senate and Committee, Bentley wrote on a whiteboard rather than using the PowerPoint presentations that are usually presented.

The initiative’s community-building endeavors have extended beyond the boundaries of the Anschutz Medical Campus. The leaders have chartered buses to take members of the RNA Bioscience Initiative to meetings of the long-established RNA Club at CU Boulder.

The initiative has also established relationships between beginners and experts. A summer internship program welcomed six undergraduate students, who were paired with faculty mentors, as they sought to gain laboratory experience.

The undergraduates attend lectures on RNA by Davis and on how to design experiments by senior faculty. “Every mentors’ lab had to have someone come in and talk about research and give a presentation,” Bentley said. “There was an educational component.”

The RNA Scholars, who are four graduate students on the Anschutz Medical Campus, get a stipend and a small discretionary fund – $2,000 – to support their work. They can use it for a computer or attend a meeting. In addition, the leaders have created the RNA Bioscience travel award, which supports students who got to meetings and present posters or give talks.

While strengthening the campus community, the RNA Bioscience Initiative is also investing in support services for those conducting RNA-related research, evaluating sequencing equipment and hiring Kent Riemondy, , as an informatics fellow.

That expertise is critical for researchers because the amount of data can overwhelm the capacity to understand it, so improving the ability to conduct the analysis is paramount. “Many people consider it the rate-limiting step in today,” Davis said.

All the while, the program has also been actively looking to hire rising stars in the field, posting ads and bringing prospective faculty members to campus. The RNA Bioscience Initiative recently announced that Olivia Rissland, , assistant professor of molecular genetics at the University of Toronto, will be joining the School of Medicine faculty this fall.