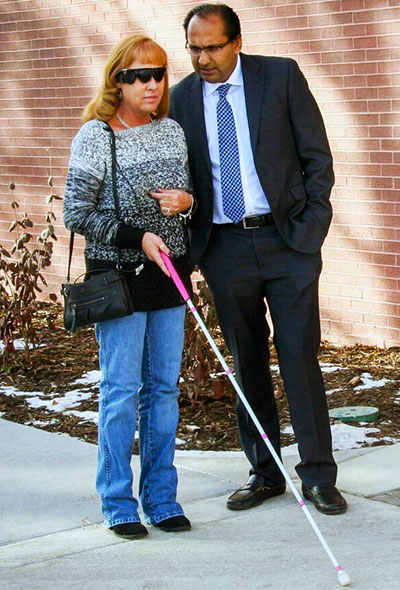 (May 2016) By 2020, 196 million people worldwide will suffer from age-related macular degeneration (AMD). That’s four times the global incidence of dementia, and 14 times the number diagnosed with cancer each year. By 2040, according to a recent study published in the Lancet, of AMD will soar to 288 million.

“It is a major public health issue,” says Naresh Mandava, MD, chair of the Department of Ophthalmology at University of Colorado School of Medicine. Yet for roughly 9 out of 10 those people, no medical treatment exists. “I’ve had patients in their 50s who can’t see their kids anymore or see well enough to go to work. It’s devastating. It has been a real frustration to see them go downhill and not have much to do for them.”

Fueled by that frustration, and propelled by millions of dollars in new funding, Mandava and his colleagues at the UCHealth Eye Center are, as he puts it, “doubling down” their efforts to find a cure for AMD.

They’ve launched a new AMD registry which will follow hundreds of patients over the course of their disease. And with $10 million in private donations, they’ve initiated an ambitious ocular stem-cell program aimed at developing a retinal transplant procedure to restore sight in patients blinded by AMD. Meanwhile, they’re testing novel, injectable drugs targeting tough-to-treat “dry” macular degeneration, in Phase III trials. And in December 2015, Mandava became the first surgeon in the Rocky Mountain West to surgically implant a “bionic eye,” partially restoring the vision of a woman blind from retinitis pigmentosa for two decades. Ultimately, it could be used to address macular degeneration too.

“In addition to working on our own new therapies, we’ll be among the first to test new technologies being developed elsewhere,” says Mandava. “We are attacking this on all fronts.”

While a similar disease exists in children, AMD is primarily a malady of middle-age, in which the central retina – the macula – deteriorates. Roughly 10 percent of patients develop “wet” or neovascular macular degeneration, a late-stage, rapidly-progressing type in which the membrane under the retina breaks, prompting blood vessels to grow up through the breaks, leak, and bleed, scarring the macula.

“You can go from reading to not seeing anything in your vision but a big black spot in months,” says Mandava. The other 90 percent have the “dry” variety, in which retinal cells break down gradually, thinning the macula.

Since 2006, numerous injectable drugs have emerged to slow vision loss, and even improve it, in patients with “wet” AMD. But for the “dry” variety, treatment has been elusive. The disease is often heralded by “drusen,” dots of yellow waste deposits from withering cells, on the retina. Then central vision and color perception begin to fade. Ultimately, some develop wet AMD and others progress to advanced dry AMD, or geographic atrophy, in which black spots chew into the visual field. The question baffling researchers: Why do some patients progress swiftly and severely, while others stay stable? Big data can help answer it, says Mandava.

“Through this new registry, we’ll be able to capture very valuable data points that other people don’t have.”

In 2014, Mandava recruited Anne Lynch, MD, MSPH, to head up a newly formed division of ophthalmic epidemiology and establish several new registries related to eye disease. For the AMD registry, which boasts 400 patients and hopes to grow to 1,000, patients submit questionnaires about history, diet, lifestyle, and medication use, and retinal images using scanners at each visit. They also offer up a small sample of blood through which – thanks to new diagnostic technology from Boulder-based SomaLogic – researchers can now identify 4,000 inherent proteins. The blood is stored in a repository on campus for future research.

By matching blood, scans, and epidemiological data, Lynch and Mandava hope to identify proteins or other biomarkers associated with rapidly progressing disease, and someday develop drugs targeting those proteins, to give to patients early on. The registry could also be used to highlight lifestyle factors associated with slow, or fast, progression, informing prevention advice.

“Our patients are really interested in being part of this registry. They want to be part of the effort to find a cure,” says Lynch.

‘This is not science fiction’

Meanwhile, Mandava is using $10 million in private donations, raised over just 18 months, to work with the Gates Center for Regenerative Medicine at CU Anschutz to develop stem cell transplants for macular degeneration. Already, about 10 researchers and clinicians are working toward the goal and he hopes to recruit a dozen more.

“The goal here, and this is not science fiction, is to take someone with macular degeneration, take a patch of cells from their skin, take those cells to an onsite facility, make those into induced pluripotent stem cells, convert them into retinal cells and successfully transplant them into a patient eye,” he says. Already, researchers have discovered how to develop retinal stem cells and transplant them. Now, the challenge is to get them to establish connections with other ocular cells, function properly, and resist the processes that caused degeneration to begin with. “Our goal is to be the first one to do this, and have it work, in the United States.”

That’s not the only seemingly sci-fi project in Mandava’s sight.

On Nov. 2, 51-year-old Johnstown resident Jamie Carley nervously lay down on Mandava’s operating table in the UCHealth Eye Center for a delicate five-hour surgery in which he implanted a tiny microchip in her right eye. She’d been blind since age when the retinitis pigmentosa that had been killing her rods and cones since age 5 took the last of her sight. For eight years she’d been following the progress of SecondSight, a California start-up developing the Argus II Retinal Prosthesis System. The system uses a miniature video camera mounted on specialized glasses to transmit images to 64 electrodes on the implant, which in turn send electrical pulses to viable retinal cells (bypassing the damaged ones) and on to the brain via the optic nerve.

When Carley heard it had been FDA-approved and UCHealth would be offering it, she jumped on it. When Mandava removed her bandages and turned on the glasses in December, she was overwhelmed.

“It was extremely emotional,” says Carley, who was able to see the silhouette of her son, age 29, for the first time. While her vision has only been partially restored, she says just being able to see the outline of doors, and the edge of the sidewalk has already improved her mobility immensely.

“I can’t wait until summer, so I can go outside and look at the stars, and the moon, and fireworks,” she says.

SecondSight continues to work on improving the technology in hopes of improving resolution and someday restoring color perception in patients. And it recently launched its first clinical trial, in the United Kingdom, testing the system in those with macular degeneration.

Given all that’s happening, Mandava sees a bright future for his patients.

“Ultimately, we think it is possible to eradicate blindness. It’s tremendously exciting.”