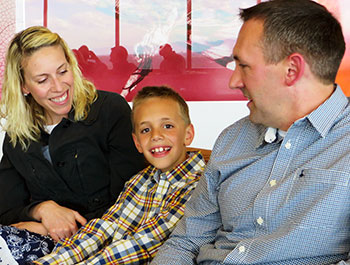 “He had a stroke?” she recalls saying to her husband Travis. “A 3-year-old can have a stroke?”

Actually, Trevor Ewert may have had four of them before a team led by Tim Bernard, MD, a pediatrician at the University of Colorado School of Medicine who practices at Children’s Hospital Colorado, figured out the likely cause.

Today, Trevor is a smiling, squirmy, chatty 8-year-old, focused on his pet frogs and mastering flip turns in the swimming pool rather than on a medical condition that surprises many people.

Bernard and a team of doctors, researchers, nurses and statisticians at the Anschutz Medical Campus now are hoping to do even better by young stroke patients such as Trevor.

“This is an important and understudied area,” says Richard J. Traystman, , vice chancellor of research for the CU Denver and Anschutz campuses. “This grant is a big thing for the kids. We feel we can, in the end, come up with understanding of stroke in children and innovative treatments.”

Traystman, who submitted the grant application, says CU is one of only a handful of medical centers in North America that focus on pediatric stroke. The grant positions CU to advance understanding of the issue through the unusual combination of research, treatment outcomes.

The focus of the grant is on a certain type of stroke and age group: childhood arterial ischemic stroke in patients ages 1 month to 18 years.

In ischemic strokes, a blood clot blocks blood flow in the brain, killing “downstream” tissue within minutes. Another type, hemorrhagic stroke, occurs when a blood vessel ruptures. These strokes can occur in utero or at birth, others or later in life.

While adult stroke and treatment is much studied, pediatric stroke is not. Ischemic childhood stroke is rare, with some 1,000 cases a year in the United States. Children’s Hospital sees about 20 new cases a year and is following about 100 children with ischemic stroke, Bernard says.

With little data about childhood stroke, Bernard says, caregivers borrow heavily from the adult world, knowing that they are helping but also that they face what he has called “a paucity of data” that further research can remedy.

“Children are not just little adults,” Traystman says. “So this is the beginning of understanding childhood stroke. the way we are treating kids cannot be 100 percent right. We don’t know what will come of what we discover through this new grant but I’m sure it will be different than with adults.”

For a child neurologist such as Bernard, the grant is huge.

“We make the best decisions with the information we have,” he says. “But I find myself craving this information. I want to learn how to treat the kids I see better.”

Even the cause of stroke is different in children and adults. With there are clear links to conditions such as high blood pressure. With children, the cause often is mysterious, although preexisting issues such as sickle cell disease or congenital heart disease are sometimes a known cause. The consequences for children can be lifelong and one stroke makes it more likely for another to occur.

For Trevor Ewert, the cause may have been a mishap on a trampoline.

A bouncing playmate accidentally landed on Trevor’s neck. Soon after, Trevor began suffering from severe headaches. One day, the Highlands Ranch family pulled into the parking lot of their church. Brooke and Travis turned to the back seat and were horrified to see Trevor’s body stiff and immobile.

“Dad,” Trevor asked his father at one point, “when I go to heaven will you see me?”

The case eventually came to Tim Bernard, part of the stroke group at Children’s Hospital, which began its stroke clinic in 2004, when Bernard was a fellow there.

Trevor’s previous scans had revealed nothing. But Bernard pushed, sending Trevor’s scans to colleagues. On the same day, someone at of Colorado Hospital and another in Toronto detected something in an angiogram: a bulge, hard to see because it was tucked away in a bend of blood vessel to the left side of the brain.

It was where the playmate had landed on Trevor’s neck. It was the kind of defect that could produce clots that would lodge deeper in the brain.

David , MD, a medical school professor who practices at University Hospital, performed surgery, inserting small coils to block blood flow to the problem area. Another blood vessel took over. Trevor hasn’t had a stroke since.

His case already has guided treatment for another child with similar symptoms. Now the grant may take matters much farther.

When they decided to go after that grant funding, Traystman, the veteran researcher, and Bernard, the clinician three decades younger, would hash things out by telephone Saturday mornings, seeking something unique and compelling, Traystman says, “so they would have to fund us.”

stroke itself was an unusual focus for a stroke center. But the grant also was built on the capabilities of the existing Children’s Hospital stroke program, CU animal research and the multidisciplinary strengths of the Anschutz campus, which is home to two hospitals and five health care schools and colleges.

Bernard’s focus includes the psychological aspects of helping children with a stroke. Everybody’s different, he says. So for some 16-year-olds, a stroke that limits feeling in the right hand might not be crushing. You still could drive, for example, or get a job.

“But what if you are a baseball player?” Bernard asks. “Losing that ability at 16 can be devastating.

“If we better understand what is important for the individual patient we might be able to intervene in a way that is more helpful.”

The grant includes the unusual component of training two MDs and two PhDs for two years in a program led by Sharon Poisson, MD, as well as pediatric animal-based research in stroke led by Traystman and CU colleagues Paco Herson, , and Wendy Macklin, .

“Our main goal,” Bernard says, “is to help kids have a high quality of Trevor does.”

“We learned a lot through our experience with Trevor,” the boy’s mother, Brooke, says. “And we want to help any way we can.”