Learning skills abroad to use at home 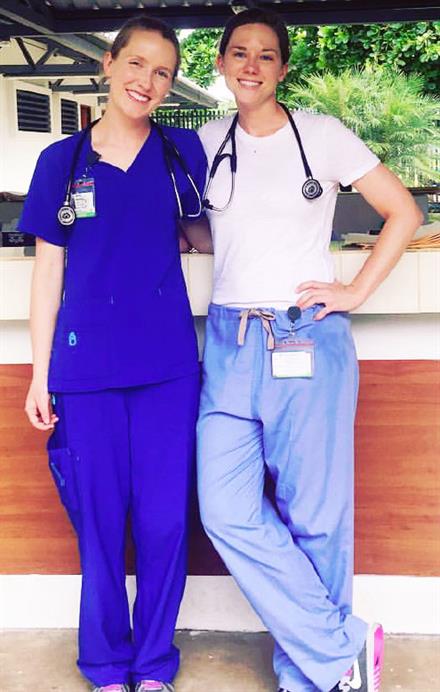 (May 201 8) Alix Armstrong arrived at the Trifinio Clinic in rural Guatemala last summer with good credentials.

A second-year physician assistant student at the CU School of Medicine, Armstrong had strong Spanish language skills – she had previously taught English in Spain – and she’d witnessed extreme poverty at refugee camps while serving as part of a public health brigade in Thailand.

Still, some of what she found defied her expectations. The Trifinio clinic offered an on-site lab that returns patient results within an hour. A trained technician performed ultrasounds for expectant mothers. A team of researchers was studying the Zika virus and other diseases. And the clinic itself had a well-stocked pharmacy, several patient rooms and a clean, organized central work station.

“I went in with a little apprehension. It’s a developing country, and safety is always a concern. There were surprises in Guatemala, but they were all good surprises,” said Armstrong, one of 15 physician assistant students form CU who traveled to the clinic last year to do a supervised clinical rotation.

In the living quarters for visiting students and professionals, rooms were clean and new, and there was even a trained chef.

“Honestly, I was so impressed. She was an actual chef. And then there was always peanut butter, popcorn and fruit. They knew Americans were coming and they made sure we always felt at home.”

Despite Armstrong’s solid ability to speak Spanish, she spent her first week in Guatemala at Celas Maya, a Spanish-language immersion program in nearby Quetzaltenango. Those lessons included five hours of one-on one instruction each day and improved her knowledge of medical terminology and colloquialisms.

Some students decide to spend as long as a month in the language school before progressing to the clinic, said Claudia Luna Asturias, LSCW, a faculty instructor in the CHA/PA program. They live with local families and can tour the area. Armstrong says she rode a zip line over a coffee plantation and took salsa lessons.

But she said her host family was the highlight.

“I loved them,” Armstrong said. “The grandma was so sweet. She loved to tell stories about Guatemala history.”

CU students who rotate through the clinic see people with ailments associated with poverty such as malnutrition, diarrhea from poor quality drinking water and pulmonary problems caused by fires for heating and cooking in unventilated homes. Armstrong also recalled seeing several cases of uncontrolled diabetes.

Even with the medical needs, the region’s poor farm workers often equate western medicine with impersonal hospitals and expensive treatment. As a result, clinic staff has had to work hard to build trust.

Armstrong remembers a case of an infant diagnosed by clinic doctors with meningitis. The family resisted going to a hospital even after the doctors offered to pay for the ambulance.

“To them, when they go to the hospital, someone dies,” she said. “I don’t think they ended up going.”

Guatemalan nurses are an important link to the community. Students often travel with them to patient homes to check on the health of newborns and mothers, and the home visits are considered essential to understanding the medical needs of the community.

“They realize that the community nurses don’t harm the babies. They help them get better.”

In addition, nurses are familiar with local beliefs in magic and traditional remedies which helps build rapport and a trusting relationship.

“People believe that if you look at a baby with jealousy it will cause illness,” Armstrong said. “The way you cure it is to put an egg under the bed. There are other rituals too, and they sounds silly to us. To them it’s a reality. When families brought in babies and said that this is why they think the baby is sick, we would say ‘Absolutely it could be that. We can’t dismiss it. But how about we try this too?’”

Luna Asturias says students come back to Colorado with improved cultural awareness for poor immigrants who often lived in huts with dirt floors and had little access to clean water in their home countries.

“When they return to the U.S. to where they will practice and provide care to the Hispanic population they have a better understanding of why families migrate here and their background at home,” Luna Asturias said

“Seeing the beliefs and cultural differences in Guatemala versus here was very helpful in bringing empathy to my patient care now that I understand where they’re coming from.”