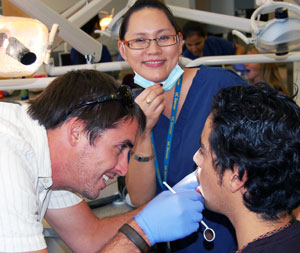 (November 2012) Physicians and dentists went their separate ways in the mid-1800s, divorcing the care of mouth from the rest of the body for well over a century.

Until a U.S. Surgeon General’s landmark report Oral Health in America in 2000, there had been little reason to consider reconciliation.

“When I was in school we weren’t even taught to look at teeth,” says Mark Deutchman, MD, professor of family medicine and Colorado Area Health Education Center (AHEC) associate director for multidisciplinary education. “There wasn’t anything we could do about them. They were just things that got in the way when we looked at the tonsils.”

But the report broke ground by calling for oral health education for all health providers to combat problems that today are considered entirely preventable: escalating numbers of children with tooth decay and adults with disease.

Children are getting a lot of the attention because the need is reaching crisis levels, Deutchman says. Dental disease is the nation’s most common chronic disease in children.

Even so, why would non-dentists be tapped to perform oral exams? Keeping oral care in the realm of dentistry would work if not for the fact that a large percentage of the U.S. population doesn’t visit dentists except in emergencies. Forty percent of Coloradans do not have dental insurance, and few children have a dental home by age 1, which health care providers recommend, Deutchman says.

But, the report reasoned, if other providers from physician assistants to nurse practitioners and physicians were able to recognize decay, they could stop the disease process early by providing oral exams, hygiene and diet advice, and varnish.

The report set in motion changes that still reverberate in health care campuses around the country, particularly at the University of Colorado Anschutz Medical Campus, where:

Glicken said she’d never thought about teaching oral care to students until she was invited to a conference by Deutchman, who was already introducing oral care into the School of Medicine curriculum.

“It took me about two hours to realize the incredible gap in dental care,” she says. “Two years ago I knew nothing about this. Now four national PA organizations are engaged.”

Providers are paid extra by Medicaid for including these services in well-child visits, but in some they have to refer patients to dentists, though it can be a challenge to find one who is willing to see children.

“We try to encourage general dentists to see little kids since there are so few pediatric dentists, particularly outside the Front Range,” says. “As doctors, we don’t examine little kids in a chair. We do knee-to-knee exams between parent and doctor. We’re teaching dentists to do that, too.”

Dental schools historically have focused more on repairing disease than on say Deutchman and Diane Brunson, director of public health at the School of Dental Medicine.

“The School of Dental Medicine is now at the forefront of teaching interprofessional care, increasing exposure to pediatric dentistry and preparing future dentists with an emphasis on prevention,” Brunson says.

Getting children’s oral health under control is important so they don’t become adults with oral health problems, Deutchman says.

For adults, the problem is less about cavities and more about gums and what their condition means for overall health.

“For example, a gum inflammation can be related to vascular disease,” says. “A lot of diseases have oral manifestation or could be worsened with oral disease.”

The first exposure most CU medical students have to oral care comes in their second year of school with a lecture on the connection between oral health and overall health. Later, they spend a morning with dental students who teach them the basics of an oral exam.

“The medical students leave here varnished ear to ear,” Brunson says. “But just as important as learning the basics of oral health is the idea that different disciplines should work together.”

Now medical and dental students volunteer to run a drop-in clinic at the National Western Stock Show each January. They also travel to Fort Morgan to work with children in the Somali population through Cavity Free at Three.

And dental and medical students are starting a student interest group to serve needy communities, says fourth-year medical student Dave Baumgartner, who like Deutchman is the son of a dentist and who says the idea of expanding oral care impressed him as “logical and intuitive. I jumped right on board.”

The students’ interest is gratifying for Brunson, who came to CU after 15 years with the state Department of Health and Environment.

“It became evident to me that I might be able to have more impact here on campus,” Brunson says. “At the state, I was trying to change the behavior of existing practitioners … But then I realized that students practice what they learn in school and this is the place to be.”