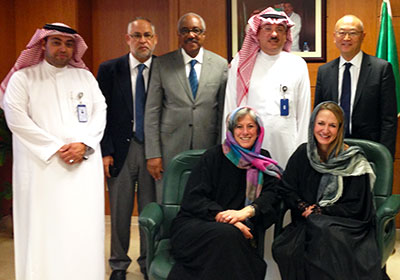 A deadly virus had already killed 15 people at a remote hospital in Saudi Arabia in spring 2013 and the Saudi Arabia Ministry of Health requested that Price, along with two other North Americans, join the international team investigating the case.

“I was called on a Monday, and by Friday, I was in Saudi Arabia,” Price says. “When I landed, I was provided an abaya and driven to the Ministry of Health in Riyadh to join a news conference with Saudi public health authorities and the World Health Organization (WHO).”

Price, chief of the Division of Infectious Diseases at Denver Health and Hospital and professor of medicine at the CU School of Medicine, is one of an elite group of experts in the world who has investigated the hot spot of a puzzling breakout.

A decade ago, Price went to Toronto to investigate a viral respiratory illness called severe acute respiratory syndrome (SARS). It was first reported in China in February 2003 and it spread to more than two dozen countries in North America, South America, Europe Asia before it was contained.

“Hospitals in Toronto were having difficulty controlling a resurgence in SARS cases, and their health care workers needed some relief. The Ontario Ministry of Health asked for health care epidemiology and clinical infectious disease assistance,” Price says.

As a result, Price and her fellow investigators “learned a lot about the infection control of emerging respiratory infections” and now could act as a rapid-response strike team for the current Saudi outbreak.

“SARS seemed to go away and then MERS, which is caused by a closely related virus, is identified 10 years later,” Price says.

Middle East Respiratory Syndrome coronavirus (MERS-CoV) was first detected in 2012 and it emerged as a serious enough issue in spring 2013 that Saudi Arabia invited the WHO and other experts, including Price, to help assess the situation.

“There are many other things that we don’t understand,” the WHO announced. “For example, how are people getting infected? Is it from animals? Is it from contaminated surfaces? Is it from other people? Finally, we don’t know how widespread is this virus, both in this region and in other countries.”

Price went to Saudi Arabia knowing that cultural differences would add to the complexity of the work. But knowing what to expect was not the same as experiencing it. It was more complicated than grabbing a scarf when she packed for the trip.

For example, the man driving her through the desert to the country’s oil-producing Al-Hasa region didn’t speak to her. Suddenly and without explanation, he pulled over along a remote stretch of the highway and stopped the car. It became clear soon enough that he was stopping to pray, but the isolation of the setting jangled her nerves.

Additionally, coordinating the working arrangements required attention to cultural norms. The women on the team needed special permission to work in the conference room as they pored over records.

“We completed the chart reviews from the dialysis outbreak in a week,” Price says. “We worked nonstop, but we had it figured out by the time we returned to the United States.”

The team reported in early June 2013 that there had been 55 cases confirmed by laboratory testing. Of those, 40 occurred in Saudi Arabia. While the overall number of cases was limited, the virus caused death in about 60 percent of patients.

Price says MERS originated as a bat virus that likely found its way to camels, which might explain why it was originally located in the Middle East. The WHO has continued to monitor MERS closely and study how it is transmitted. Globally, 834 laboratory-confirmed cases of infection with MERS-CoV, including at least 288 related deaths, have been reported to the WHO as of July 14, 2014. As surveillance efforts increase, mortality among identified cases has decreased by approximately 35 percent.

Beginning in mid-May 2014, there was a substantial increase in the number of MERS cases reported, including the first case in the United States when an infected traveler entered the country. Eighty-five percent of cases have been reported from Saudi Arabia, and most of the recent cases have occurred in health care settings.

The reason for the increase is not yet completely known, and Price returned to Saudi Arabia in June with a team from Johns Hopkins International to investigate an outbreak at Jeddah hospitals.

“It is important to implement measures to limit human-to-human transmission in health care facilities and in the community in preparation for the upcoming pilgrimage to Mecca (the hajj),” Price says. Jedda is the entry point for almost 3 million Muslims, including almost 11,000 Americans, who make the pilgrimage each year. This was a unique opportunity to hopefully have a hand in preventing the next pandemic, and that’s what was such a privilege with this trip.”