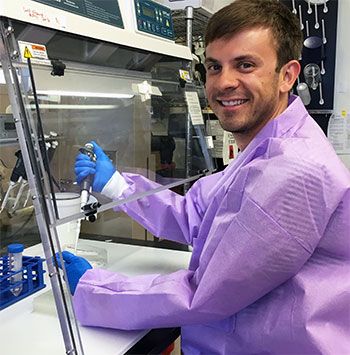 (November 2016) As an undergraduate, Bryan Nycz heard a guest lecture about the human microbiome by Daniel Frank, , an infectious diseases researcher at the CU School of Medicine.

Now, Nycz, a second-year medical student, is doing original research in Frank’s lab, aimed at uncovering connections between the microbiome and the infections often experienced by young leukemia patients during chemotherapy.

“What we’re doing now is all exploratory,” says Nycz. “We’re not really sure what we’re looking for yet, which I kind of enjoy: waiting to see what the data tells us. It’s actually kind of cool to wonder, in the future will our findings turn out to matter?”

Nycz is one of twelve students who, after completing the first year of medical school, spent the summer conducting original research at the University of Colorado.

As participants in the Department of Medicine’s Research and Equity in Academic Medicine (DREAM) program, these emerging second-year medical students are working with CU mentors to generate research results and present – and in some cases even publish – their findings.

In addition to Frank, an assistant professor in the Department’s Division of Infectious Diseases, Nycz’s summer project also allowed him to work with Samuel Dominguez, MD, , associate professor of pediatrics, studying young leukemia patients who get gut infections during chemotherapy, to identify risk factors and preventive approaches.

“Medical school is very cut-and-dried,” says Nycz. “It’s very structured compared to this research work, where we’re using new tools, we’re improving them as we go, and no one knows how it’s going to turn out.”

“The DREAM program is meant to give aspiring medical professionals the opportunity to see how research is done, and to understand the potential impact of research,” says David Schwartz, chair of the Department of Medicine, who launched the program in 2011. “Not only does the program allow them to participate in research it also helps them understand the research enterprise, and how that enterprise is intimately connected with the way we take care of patients.”

The program’s goals are to increase the pipeline of physician-scientists and to increase the number of students in the pipeline who are from backgrounds underrepresented in medicine. Even if participating students do not pursue research-related careers, they stand to become better physicians after their experience in the DREAM program.

The DREAM program was developed in part because of data showing a large decrease in the number of physician-scientists. Physician-scientists facilitate a team approach to medical research, in which clinical insight from caregivers at all levels is combined with basic science research from multiple disciplines.

“Someone who’s spent ten years studying clinical medicine and disease processes has something to offer the research effort, and that’s the interface where progress will be made,” says John Repine, MD, Waring Professor of Medicine, who has led the program since 2013.

Many medical students see the advantages of combining research with the practice of medicine.

“I really like the idea of being able to attack a clinical issue from both sides, working to improve the treatments at the same time as working to help individual patients,” says Tessa Harland, who worked last summer with Aviva Abosch, MD, PhD, professor of neurosurgery, on a project focused on recording signals in parts of the brain associated with movement, to help target electrode therapy for Parkinson’s disease.

A June 2014 report from the National Institutes of Health (NIH) Physician-Scientist Workforce Working Group indicated that only 1.5 percent of American physicians consider research to be a primary focus area, and less than 1 percent are principal investigators on NIH grants.

During the past 20 years, the percentage of NIH awardees who are physicians has declined to 30 percent. Additionally, the report found that the average age of the physician-scientist is rising, as younger researchers have not emerged in significant numbers, presaging a demographic crisis as this workforce eventually ages out of active research and clinical practice.

One reason for the decline is that new MDs typically have substantial student loan debt. Establishing a career as a research scientist takes time. According to the NIH, the average age at which physician-scientist investigators receive their first independent federal grant is 45.

“That’s all the more reason we want to start students in research earlier,” says Repine. “Getting early experience, publishing early papers, they can develop a real interest in research that will help take them through that long process, and maybe even accelerate it a little. Starting late is very difficult.”

Brooke Bredbeck, MD, who participated in the DREAM program in 2013 and graduated from the CU School of Medicine in 2016, worked in the laboratory of Neda Rasouli, MD, associate professor of medicine, exploring the connection between angiogenesis and insulin sensitivity in an obese population, and later presented her results at the Western Student Medical Research Forum.

“I think research in an academic environment has the potential to be either a vicious cycle or a virtuous one,” says . “If you’ve never had any research experience, it’s much harder to ever get started working in a lab, since you need quite a bit of training before you can really contribute to the group. But if you do have any sort of research training, it makes it much easier to get a research job even if the focus area is completely different – they know you understand the different way things work in a research environment.”

A more diverse workforce of physician-scientists

Racial and ethnic minorities comprise over a quarter of the U.S. population, but only 6 percent of practicing physicians are Latino, African-American and Native American. The NIH Physician-Scientist Workforce Working Group found similar numbers among physician-scientists, reporting that approximately 75 percent of physicians who receive independent NIH funding white, another 20 percent were Asian, and the remaining 5 percent were Latino, African-American or Native American.

Increasing the diversity of researchers, especially those who also see patients clinically, is an important step in addressing health disparities, and asking research questions about medical issues that disproportionately impact minorities. To address this gap, the DREAM program recruits medical students from underrepresented backgrounds.

Not all DREAM participants will ultimately go on to careers in research medicine, Repine notes, but this first-hand exposure enables participants to read, interpret and critically evaluate research findings on their own, which in turn, makes them better physicians.

In addition, the program also helps prepare participants for competitive residency and connects them with mentors.

“The mentorship is probably the most important thing I gained from the DREAM experience,” says Quan Bui, MD ’16, who worked in the laboratory of Mark Geraci, MD, on a pulmonary hypertension project that extended into his third and fourth years of medical school. Geraci is the former head of the Division of Pulmonary Sciences and Critical Care Medicine in the Department of Medicine and now chair of the Department of Medicine at Indiana University.

“In addition to Dr. Geraci, who was and continues to be a great mentor to me, I also met fellows and other pulmonary researchers, which is important because ten or fifteen years, I see myself in academia. I know I want to teach, and in terms of research, it might not be basic science research but I will certainly continue some kind of research activities, probably on the clinical or outcomes side.”