Learning Outside the Classroom

(November 2013) During their rural and community care block, CU medical students complete a community service learning project to help them understand how providers can influence the health of their communities outside a medical office.

Projects can be as basic as giving a health care talk to the public. But many students pursue creative options like getting involved in family planning, palliative care, healthy kids camps science fairs. Some students continue projects started by others who came before them.

“They all do something I’m impressed with,” says Amy Carpenter, MD, a preceptor in San Luis, whose students have often concentrated on exercise and diet.

The following are stories of two student projects. You can read about student experiences on the student blog.

The patient’s case was common enough in San Luis, a town of 650 in southern Colorado’s Costilla County. Like a large percentage of people there, he had diabetes. 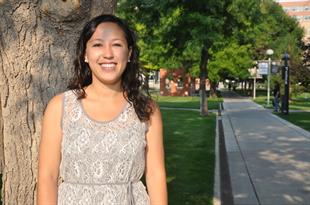 Unlike most people, though, he could identify a reason for the problem.

Schaffer already knew that the town was a food desert, with the closest large grocery store a 45-minute drive. Healthy options like fresh produce were difficult to find, so many residents relied on local eateries

e daughter of a nutritionist, Schaffer checked out the restaurant menus and decided to take action. She asked each owner to offer a few lighter dishes

e proprietor of the town’s busiest restaurant was amenable.

“Her husband had a heart condition and so she was familiar with what I was talking about. She was enthused, and she had some ideas of her own,” Schaffer says

r they came up with new menu options. Schaffer wasn’t suggesting anything radical, just grilling or instead of frying, and substituting vegetables for rice and beans. 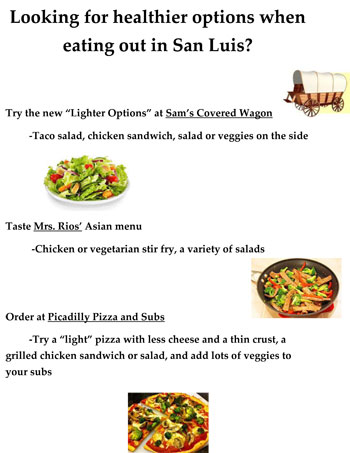 Convincing the second owner was a little more challenging. She had trained at a diet cooking school in California, had already tried to offer healthier food and found that customers weren’t interested. She also had hired a chef to serve Thai cuisine as well as Mexican. Her own family ate the healthier options, the owner told Schaffer

t these were unfamiliar food choices to townspeople, Schaffer says. “Most people who’d grown up there don’t eat Thai.”

However, the owner appreciated Schaffer’s attempt to educate customers and agreed to give healthy food another shot.

Schaffer was willing to support the restaurants in return. She created a flyer that she posted at her clinic, the San Luis Health Center, and at a few other places in town to create awareness that there are choices and that choices matter. Her expectations ran toward the realistic, not the revolutionary.

“I realized that having these changes present on menus was not going to cause a major change in the way people eat. But in combination with counseling and making people more aware of the options out there, I think this could bring about small changes.”

“Some people felt like they’d heard it before and didn’t seem excited about it. Some people were very receptive and said they didn’t realize these changes could actually make a difference.”

Schaffer’s preceptor, who happens to be Costilla County’s only full-time physician, Amy Glaser Carpenter, MD, estimates that a quarter of her patients are and that most people don’t exercise or watch their diets. Schaffer is not the first CU medical student to tackle the entrenched problem. Others have started programs like lunchtime walks and health talks for kids

s month in San Luis revealed to her the disparity in services between rural and urban health care options.

“The people were probably less educated overall about their health, but the really striking thing was that there were a lot fewer resources in a small town. Instead of sending someone out for a nutrition counseling or diabetes class, which is pretty easy to do in Denver clinics, in San Luis there would be a class every three months.”

The pamphlet first came to the attention of Gunnison Valley Family Physicians last spring via a patient who was curious about its claims. 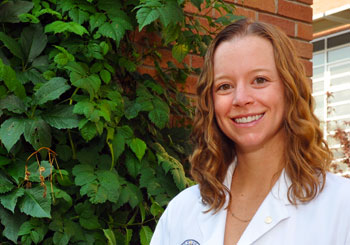 Titled “Vaccines: Be Informed! 18 Reasons to ‘Just Say No!’,” the brochure made allegations that Brooke Thurman, then a third-year student, and her preceptor Marie Matthews, MD, knew to be disproved: Childhood vaccines cause cancer, autism, convulsions, deafness, sudden Infant death syndrome.

In a small town like Gunnison, already suffering from a lower-than-average childhood vaccination rate, a pamphlet like this could do some damage. Other allegations included:

So Thurman, who was a month into her three-month clerkship on the Western Slope, responded with a pamphlet of her own: “Childhood Vaccines: What Does the Evidence Say?” 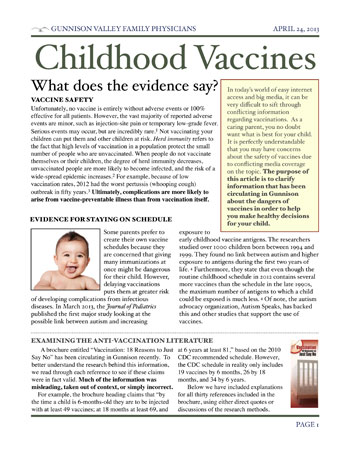 Point by point Thurman addressed the anti-vaccination claims. For example, one bullet point says that the U.S. Centers for Disease Control and Prevention recommend that all children have 81 vaccinations by the time they’re 6 years old. The correct number is 34, Thurman says.

“The claims were not true or accurate, and I thought it was important to try to explain it to people,” she says.

Education about vaccinations is a big issue in Colorado, which ranked second lowest in the nation in 2011 for childhood immunization partly because exemptions are easy to obtain. The state allows a parent to opt out for medical, religious and philosophical reasons.

Thurman is now getting a master’s degree in global health at the University of California, San Francisco, and will return to CU in a year to finish her fourth year of medical school. In the meantime, her preceptor has been distributing the pamphlets in clinics around the area and the response has been positive.

“People read that vaccines are bad, but they don’t necessarily take the next step and ask ‘Is it true? Is it really validated?’” Thurman says.