Understanding the world of microbes inside the body

(May 2017) The GI and Liver Innate Immune Program (GALIIP) plans to build on strengths already on the CU Anschutz Medical Campus to expand understanding of some of the fastest-growing diseases facing society.

Costing the U.S. health system nearly $500 billion annually, gastrointestinal and liver-related diseases are burden, yet there is an unmet need in diagnosis, treatment understanding of conditions such as fatty liver disease, eosinophilic esophagitis and inflammatory bowel disease.

“The concept of innate immune response is that it happens much sooner than adaptive response,” said Hugo Rosen, MD, professor of medicine and immunology, head of the Division of Gastroenterology and Hepatology and one of the leaders of GALIIP. “They’re kind of the first line of defense against infection.

“Where an adaptive or T cell response takes four to eight weeks, this happens in hours to days,” he said. “And organs like the gut and the liver are characterized by a very high frequency, or what we call an enrichment, of these innate lymphocytes and nowhere else in the do you find such concentration.”

In recent years, scientists have focused their attention on gaining a better the concentrated microbe population living in the human intestines.

Sean Colgan, , professor and vice chair for research in the Department of Medicine and one of the leaders of GALIIP, said, “The GI tract and the liver are termed mucosal tissues and a mucosal tissue is one that interacts with the environment, the outside world.”

“In particular, think about the gut,” he said. “The gut interacts with more bacteria, more microbes than any other organ in the body. And in one of the great strengths we have here on this campus is the microbiota work that’s going on.”

One of the leaders in that effort, Colgan said, is Catherine Lozupone, , in the Department of Medicine’s Division of Biomedical Informatics and Personalized Medicine. Using , high-throughput gene sequencing and a groundbreaking algorithm she designed, Lozupone has published more than 50 papers, laying a foundation for a field believed to hold great promise for yielding more personalized treatments and prevention strategies.

GALIIP also draws on a rich legacy. Work by Norman Pace, , who now is a Distinguished Professor of the University in CU Boulder’s Department of Molecular, Cellular and Developmental Biology and who previously held faculty positions at National Jewish and the University of Colorado Health Sciences Center, informs the program. Pace’s laboratory led the development and use of molecular methods to study microbial ecosystems.

“We have a very large footprint in microbiota analysis,” Colgan said.

The next step is to expand into new areas of discovery, outlined by GALIIP as: 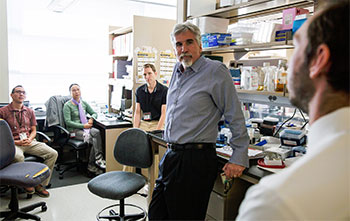 “Using those samples, researchers can look at the populations of cells residing over the liver and ask how many of these cells are autoimmune liver conditions, viral conditions, fibrotic-scar-forming conditions, and interestingly in the liver the predominant population is actually innate lymphocyte population,” he said.

With such knowledge, GALIIP researchers building a better understanding of the vast landscape of the microbiome and why it manifests differently in particular populations.

“One of our big pushes is to understand the differences between liver disease and gut disease in kids and in adults,” Colgan said. “So being on this campus and having Children’s Hospital and University Hospital here and the basic science is a big advantage.”

With the combined insights, GALIIP researchers hope to improve the understanding of the vast landscape of the microbiome.

“You get this genetic foundation in terms of what’s known about certain receptors, or certain pathways, that are regulated genetically, but there is so much more going on within the microenvironment,” Rosen said.