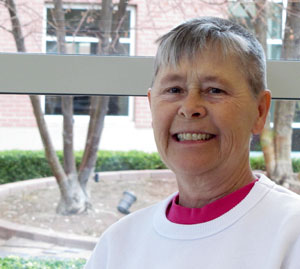 (May 2012) As if fighting one form of cancer were not enough, Emelia Johnson-Tabakoff was suddenly facing the possibility that she had two types of the disease.

And to find out if the suspicious “lump” in her thyroid was cancer would typically require surgery that would postpone crucial treatment for cancer that had previously been diagnosed, in October of 2010.

But she had an alternative to surgery. The way forward rested with 167 genes. One hundred sixty-seven out of 22,000 genes would tell whether Johnson-Tabakoff’s thyroid nodule was harmless, and chemotherapy to treat her ovarian cancer could begin.

Half of all Americans will develop a lump on their thyroid by the time they are 60 years old. In the majority of cases, a simple tissue sample obtained with a needle will rule out cancer. But in about 30 percent of patients, that sample will be inconclusive. Until a year ago, those patients likely would have needed surgery to make the decisive call.

The surgery itself is not generally considered risky. But Johnson-Tabakoff’s case was tricky. Her ovarian cancer was an aggressive threat, so the sooner she started chemotherapy the better. Yet if she needed the surgery, the chemo would have to wait because the cancer-fighting drugs would increase her risk of bleeding during surgery.

“My opinion was just, ‘Cut the damn thing out,’” says Johnson-Tabakoff, a spirited 61-year-old who divides her time between Denver and running a cattle-breeding ranch in Illinois. “But if they did that, I couldn’t start the chemotherapy.”

Johnson-Tabakoff’s husband, a professor at the CU School of Medicine, thought there was another option. Boris Tabakoff had read about a genomic screen that, without surgery, could determine whether the nodule was benign.

Developed by Veracyte, Inc., the Afirma Thyroid FNA Analysis measures the expression of genes that distinguish whether the thyroid tissue is malignant or benign. Now commercially available, the screen was still being researched when Johnson-Tabakoff was diagnosed. CU had one of two lead national research sites. The CU effort was led by Bryan Haugen, MD, head of the Division of Endocrinology, Metabolism and Diabetes.

The test results, delivered in December 2010, revealed that Johnson-Tabakoff did not have thyroid cancer. No surgery needed. Chemotherapy to treat her ovarian cancer began soon after. Before too long, she felt strong enough to head back to Illinois to tend her cows.

“It really gave me peace of mind,” Johnson-Tabakoff says of the test.

Although her ovarian cancer returned in early January 2012, now she can focus solely on that fight.

“It’s fascinating what’s being developed,” adds Johnson-Tabakoff, who was trained as a clinical pharmacist. “A lot of these tests can save money and anxiety, but we need to figure out a way to use them in a manner that is a benefit rather than overused and abused.”

A study published in November in the Journal of Clinical Endocrinology & Metabolism found that the thyroid genomic analysis could do just that. It’s estimated that this genetic screening could reduce thyroid surgeries by 74 percent, sparing 50,000 surgeries in the U.S. every year and saving $600 million.