A Glimpse of What's Going on Inside 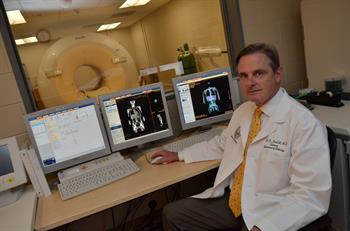 (November 2013) A new research center at the School of Medicine will help scientists and physicians see some of the body’s inner workings, a crucial step toward better understanding and treatment of conditions that stubbornly resist sharing their secrets.

With updated body-scanning equipment and state-of-the-art laboratory techniques, the Colorado Translational Research Imaging Center (CTRIC) will capture images that yield some of those mysteries

d Dodd III, MD, chair of the Department of Radiology, describes the center’s reach as “almost limitless” because its techniques can monitor so many different kinds of cellular activities inside the body

g that point, CTRIC’s first round of pilot projects, launched last summer, will test theories that monitor activity in the brain, lungs, fat tissue, connective tissue prostate. Huntington Potter, , will be able to document the path of a protein as it courses through the brain of a person with Alzheimer’s disease. Another researcher, Ed Melanson, , will look at how brown fat is affected by the loss of estrogen

e creation of an imaging center was a priority of the 2009 School of Medicine Research Retreat.

“There was a very strong and diverse interest in expanding our research imaging capabilities, particularly in PET imaging,” Dodd says. “However, we had next to no existing PET researchers on campus. It was a chicken or the egg problem: No facility meant no researchers. We had to build the facility before we could create the program.”

And there was a lot that had to happen: purchasing a scanner that would be used only for research purposes, building a space to house it, establishing a laboratory where radiopharmaceuticals could be made, hiring the talent to run that lab, working to gain the federal government approvals necessary to use those specially created radiopharmaceuticals and establishing the protocols to prioritize the research requests

e two key pieces of equipment are a PET/CT scanner and a cyclotron. PET (positron emission tomography) and CT (computerized ) have been tools of the trade for many years. But the use of PET/CT for original research on the Anschutz Medical Campus had been nonexistent, even as it expanded at other academic medical centers

.The PET scan is particularly useful because it provides a peek at the body’s inner workings.

“It is an inside-out imaging technique, rather than outside-in,” Dodd says. “CT uses X-rays that originate outside the body and are passed through the body to create an image. With PET, you inject a into the body and detect its ‘rays’ as they come out of the body.”

r Smith-Jones, , director of the radiopharmaceutical science program and professor of radiology, came to the School of Medicine three years ago from Memorial Sloan-Kettering in New York to help start the program.

“It’s always nice to build something from the ground up,” Smith-Jones says. “It’s a chance to leave a legacy.”

Smith-Jones works on the second piece of equipment, the cyclotron. It is located in a concrete bunker on the first floor of the Anschutz Inpatient Pavilion, behind doors with radiation warning signs. He uses the cyclotron to produce essential parts of the compounds used in research tests.

“We change one element into another,” Smith-Jones says. “It’s kind of like alchemy, like changing lead into gold, only we’re changing nitrogen into carbon.”

Though he quickly notes it’s not magic, something better: “It’s science.”

For example, by converting the element nitrogen-14 into carbon-11 in the cyclotron, Smith-Jones creates a radioisotope that can replace natural carbon-12 in organic compound. This radiopharmaceutical is then injected into patients for measuring the body’s activity at a molecular level. 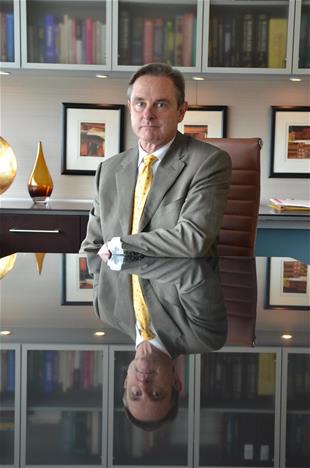 “Most pharmaceutical compounds are intentionally made in amounts that will have an impact on biological function and treatment of the targeted disease,” Smith-Jones says. “In contrast, our compounds are made in very small amounts so that they don’t have any effect on the body, but can still be imaged by the PET scanner.”

For Huntington Potter’s study, for example, a specially designed attaches to brain cells and allows researchers to monitor which cells are affected by Alzheimer’s disease and which might be responding to a drug intended to stop or reverse the disease’s progression

e such tools have been available for many years, they have not been available solely for research purposes at the School of Medicine. Instead, PET/CT scans have been used more often in clinical settings for purposes of diagnosis. And while those clinical settings depend on commercially available compounds, CTRIC is set up to develop custom compounds designed specifically for research projects

n fact, the cyclotron purchased had been operated for nearly a decade by a pharmaceutical company making compounds for commercial sale. One step in establishing CTRIC was acquiring the cyclotron so that it could be used for dedicated research projects.

As the only imaging research center of its kind in the Rocky Mountain region, Dodd says scientists and physicians at the School of Medicine will now have the ability to conduct their research closer to home. And the school can nurture relationships with other institutions; researchers from CU-Boulder are conducting one of the pilot projects at CTRIC.

The price tag for such investments is significant: For CTRIC, the investment totals about $6 million.

The funding does more than purchase equipment. It establishes a center with staff to make radiopharmaceuticals and manage the process of en-suring compliance with federal regulations. It creates a learning hub that sponsors a lecture series on advances in imaging. And it provides the startup funding for pilot projects that seek to investigate new research questions and generate pilot data for future grant funding.

“CTRIC provides significant new research opportunities for translational researchers on our campus from basic science through clinical trials,” Dodd says. “It provides a new view of the inner workings of health and disease and will lead to earlier and better treatments for our patients.”