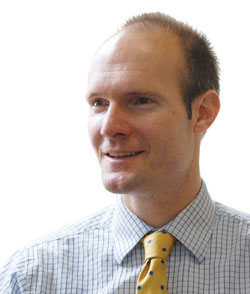 ( 2013) Christian Thurstone, MD, was named an Advocate for Action by the White House Office of National Drug Control Policy in October 2012 for his “outstanding leadership in promoting an evidence-based approach to youth substance use and addiction.”

Thurstone, an associate professor of psychiatry at the University of Colorado School of Medicine, is the director of one of Colorado’s largest youth clinics. He is board certified in general, child, adolescent addictions psychiatry and serves as the president of the Colorado Child and Adolescent Psychiatric Society. He also is a board member of Smart Approaches to Marijuana, a group led by former Congressman Patrick Kennedy.

In December, Colorado Gov. John Hickenlooper named Thurstone to a state task force convened to make recommendations about how to implement Amendment 64, a constitutional amendment approved by Colorado voters in November 2012 to legalize the personal use and regulation of marijuana for adults 21 and older.

Q: How do you think Colorado changed when voters approved medical marijuana in 2000?

A: I wasn’t around when that amendment passed. I moved to Colorado from Chicago in 2003. Not a whole lot changed in when people voted for it. In 2001, the medical marijuana registry started and there were only 3,000 to 5,000 on it at any one time. It was a pure caregiver model, where people had to grow it themselves or have someone grow it for them. It was kind of a sleepy program at that time.
It wasn’t until 2009—when a whole confluence of events occurred that led to the commercialization of marijuana—that things changed. What matters is not so much the decriminalization; it’s the commercialization that affects people, especially kids. That’s how I got involved in this whole issue.
Ninety-five percent of the treatment referrals to Denver Health are for marijuana. Nationwide, it’s two-thirds of the treatment referrals according to the Substance Abuse and Mental Health Services Administration (SAMHSA).

Q: What have been the health consequences of the expanded availability of marijuana in Colorado?

A: I can tell you what I’ve seen. We started having these young patients referred to us who were saying, “Why would I want to stop this? It’s my medicine. I’m getting it from my brother or my friend. I’m using it for my anger, anxiety, ADHD.”
There have been two studies that found up to 74 percent of teens in substance-abuse treatment are using somebody else’s medical marijuana. About 20 percent of teens in primary care are accessing diverted medical marijuana. It’s all diverted through somebody who is 18 or older.
Clinically, it is harder to treat these kids. They come in with a more favorable attitude about marijuana. When they get clean, it’s hard to keep them clean when it’s so easily available and when you can walk down the street and see so many places where you can get it. Think about what that does to somebody who is addicted. It’s much easier for them to relapse. It does present a lot of treatment issues.

Q: What kinds of issues do you see in the patients who come to see you?
A: Right off the bat I can tell you that the average age is 16, and 80 percent have co-occurring mental health problems. Thirty percent have a major depressive disorder, 20 percent have diagnosed anxiety disorders, 40 percent have attention deficit hyperactivity disorder. That’s the norm. They have substance abuse and dependence and serious life issues.
I should stress we see very diverse patients: urban, rural, all ethnic backgrounds. We see families that have done everything right and still end up with a child who has a significant substance-abuse problem.
With about 40 kids in treatment at any one time and treatment lasting 15 to 20 weeks, we see about 100 kids a year. We struggle to see everybody, to be honest. Also, we know from SAMHSA data that only one in 10 kids who have substance abuse disorders actually seek treatment.
It’s hard to access treatment. I don’t think the resources are there for people to get the treatment they need. The need far outweighs the supply.

Q: Backers of the amendment say occasional, recreational use of marijuana is not harmful. How do you reply?

A: For teens, any marijuana use is harmful. The data show that at least one exposure to marijuana during adolescence confers a doubling in risk of psychosis as young adults. That risk is . The more they use, the more they risk developing psychosis as a young adult.
We know that one in six teens who are exposed to marijuana become addicted to it. That compares to one in nine overall. The earlier you start, the more likely you are to get addicted.
We know that adolescent exposure can confer decreased IQ. There was a study that came out in 2012 in the Proceedings of the National Academy of Sciences, which is a very prestigious journal; a group of researchers from Duke University studied 1,000 people from birth to age 38 and found that those who started marijuana as adolescents and had heavy use in young adulthood had a decrease in cognitive function.
They ruled out other possible causes, such as other substance use, educational achievement, socio-economic status and more.
So no marijuana use by teens is acceptable.
Why that is a big deal, too, is that 58 percent of new users of marijuana are under the age of 18. There are 2.4 million new users in the U.S. every year. It is adolescents who disproportionately use marijuana and it is adolescents who disproportionally suffer the effects.

A: It’s a great experience to see the democratic process in action. I’m a physician, not a politician, so it’s interesting to hear all sides coming together and trying to solve a problem. I’m proud of the way people with very different views come together to have that conversation.