When am I ever going to find time to work out

w do I study for this test

s to these important questions can be hard to find for first-year medical students. There’s not much time to do extraneous research when you’re immersed in memorizing things like the difference between a sacrum and a scaphoid. So having an easy source of information is really helpful.
Enter the School of Medicine Buddy System.

For several years, second-year student leaders have paired their classmates with first-year students to help the newcomers navigate their immersion into medical school. 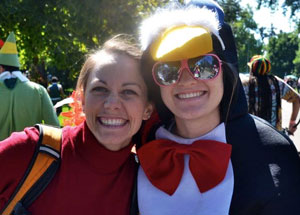 “Just the sheer volume of material that you have to learn in the first two years can be extremely overwhelming,” says Christina Osborne, a third-year student. “It’s nice to know someone older who has been through the same thing, so when you become frustrated you can ask, ‘How did you deal with this?’

The pairing occurs toward the end of matriculation week in August.

“We try to match personalities but it can be kind of random,” says Osborne’s buddy, Rebecca Thomson, who, as a co-president of the Medical Student Council 2015, was part of a team charged with matching the incoming class with members of her own class.

“We asked things like if they drank, so if you wanted to go out for a beer with your buddy you could. We also matched people with families. It can be professional, too. If we know someone who is dead-set on orthopedics, we have plenty of people to pair that person with.”

In Thomson’s case, her buddy became a friend during the interview process when Osborne offered to host her during her stay.

“We went out to dinner, and she spent the night at my apartment … I guess she enjoyed her time with me because she requested me as a buddy.”

The two socialize together and both are involved in council.  “She would give me study materials, let me borrow books; I could ask her questions about Denver because I’m not from here,” Thomson says. “She was there for whatever I needed. I was really lucky to get matched with her.”

Some matches work better than others, both Osborne and Thomson agree.

“Some go out every week or have family dinners together,” she says.

Others don’t make it very far.

“Sometimes a first year will talk to me, and I’ll ask who their buddy is and think ‘How did we pair you two up? You’re not similar at all,’” says Osborne, who has two buddies Thomson.

And while the system is set up for second years to help first years, sometimes it goes the other way.
This spring the first years put together care packages as second years took off to study for the Step 1 exam. “We put different things in like snacks, gift cards, drinks,” Thomson says.

Osborne says she’s benefited from her time with Thomson as much as the other way around.

“She taught me a ton about how to go through medical school and be successful because she has such a positive attitude. The curriculum can be so rigorous that sometimes it’s hard to keep a sunny outlook and know that at some point you will become a doctor and you will help people. She always has that focus.”

The Buddy System will soon be expanding by developing eight advisory colleges in which students will be matched with faculty and students. This will expand the number of mentors available and better organize information a new student might need.

“The best part about that is that no matter what your interests are, you have a family of people who have the same allegiance. I think that can make the transition easier,” Osborne says.