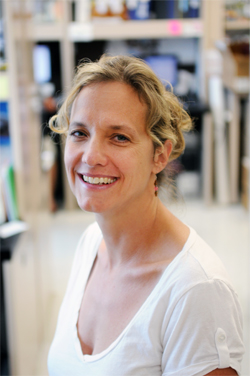 (October 2011) A gene called Six1 plays a vital role in human development, directing an embryo’s cells to divide and migrate to form organs and limbs. Once it has done its job, it is supposed to lie largely dormant.

However, this powerful gene doesn’t always stay slumbering. Reawakened in adult tissue, it becomes a killer.

Six1 is present in 90 percent of all metastasized breast and is linked to the most lethal forms of ovarian, prostate, colon and brain cancers as well as the pediatric tumor rhabdomyosarcoma.

For 15 years, Heide Ford, , an associate professor of obstetrics and gynecology at the University of Colorado School of Medicine, has been on the trail of Six1.

Ford, co-director of the hormone-related malignancies program at the University of Colorado Cancer Center, discovered its role in breast cancer. Then in a paper published in June, she explained how Six1 depends on an enzyme to play its deadly role in cancer development and metastasis. And now she may be closing in on a way to stop it.

In 1998, Ford was the first to identify that Six1 is present in breast cancer cells. A decade later, her lab published two seminal papers showing that when Six1 was present in mouse mammary glands, it not only caused the growth of mammary tumors but it also induced an epithelial to mesenchymal transition (EMT), which is associated with aggressive tumor formation and .

When she implanted human cancer cells with Six1 into mice, she found that this gene dramatically enhanced of the tumor cells into the lymphatics as well as distant metastasis. Ford has more recently found that Six1 acts in the growth of primary tumors and also at both early and later stages of metastasis in different ways. 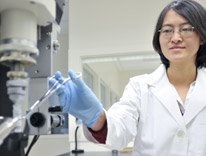 These studies “define a central role for Six1 in the development of diverse tumor types, provide insight into the role of Six1-induced EMT in tumor development, and point toward avenues of research with considerable potential,” Derek Radisky, PhD, a researcher of cancer biology at the Mayo Clinic in Jacksonville, Fla., wrote in a commentary accompanying the 2009 studies in The Journal of Clinical Investigation.

Six1 is an ideal therapeutic target in many ways, Ford explains. Because the gene is largely absent in normal adult tissue, inhibiting it should have limited side effects. What’s more, Six1 is now thought to be responsible for promoting tumor-initiating cells that are believed to be at the root of cancer but resistant to traditional cytotoxic agents. Stop Six1 and you’ll cut off the initial orders that start the cancer process, the thought goes.

Ford and research partner Rui Zhao, , believe they may have finally found a key to stopping Six1. In a study released online June 27 by Oncogene, the team reported that Six1’s role in cancer metastasis is dependent upon the presence of a partner called Eya2, which is an enzyme.

When the two genes are expressed together in breast tumors, the cancer is much quicker to metastasize and patients have a much lower survival rate. Because enzymes are typically easier to target than transcription factors such as Six1, the researchers believe interfering with Eya2 is the key to making Six1 impotent. The goal is to find a therapeutic that can either inhibit the enzymatic activity of Eya2 or its ability to interact with Six1.

“Because both Six1 and Eya2 are embryonic genes with little expression in normal adult tissues, their interaction may be a valuable future therapeutic target whose inhibition would be expected to impair breast cancer progression while conferring limited side effects,” Ford says.

After eight years of work, the researchers believe they are within reach of determining the crystal structure of the Six1/Eya2 complex. 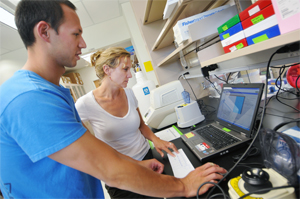 “The structure will provide rich details of the interaction between Six1 and Eya2,” says Zhao, an associate professor of biochemistry and molecular genetics at the School of Medicine. “These details are invaluable resources that will enable us to rationally design small molecule inhibitors through virtual screening on a computer to disrupt the interaction between Six1 and Eya2."

Funded by two National Institute of Health R03 grants, Ford and Zhao recently used a high throughput screening to identify a class of drugs that to inhibit Eya’s enzymatic activity and disrupt cell proliferation. In April, they received one of only two 2011 Grants for Translational Breast Cancer Research from the Breast Cancer Research Foundation and the American Association for Cancer Research to fund further work into finding a therapeutic to inhibit Six1.

They are now talking with a pharmaceutical company about a potential partnership that would allow them to screen billions of compounds to find others.

“If we are able to partner with a pharmaceutical company, we’re hopeful that we could be in Phase 1 clinical trials with a compound that will disarm the Six1/Eya2 interaction within three years,” Ford says.