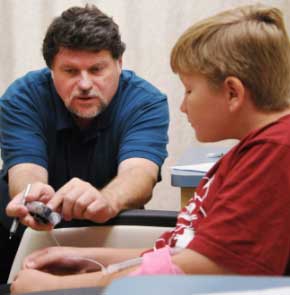 Ask 10-year-old Jackson Panzer what he feared most when he learned he had Type 1 diabetes, and he’s quick to answer: "The shots."

As the son of a Type 1 patient, he’d looked on for years as his mother, Jill Panzer, slipped a needle into her abdomen several times a day, pricked her fingers with a glucose monitor until they were raw and performed careful calculations before each meal to determine just how much insulin she needed.

"I was a little a worried that it was going to really change my life and keep me from doing what I want to do," says Jackson, who got the news July 1, 2010.

But chances are, life with diabetes will be different for Jackson.

He’s one of the first participants in a trial of what some are calling a "bionic pancreas." Within four days of his diagnosis, Jackson was fitted with a tiny sensor. It automatically tested his blood sugar every minute, sent the information to a nearby laptop computer that determined precisely how much insulin he needed and ordered a pump on his hip to deliver it—all without him doing a thing. He used the so-called "closed-loop system" for just 72 hours in The Children’s Hospital for the experiment, then went home with a pump and sensor that, while state-of-the-art, requires some input from him. But his mother, Jill, is already thinking about the future.

"My hope is that he will be able to wear a closed-loop system all the time," she says. "There is no doubt that, with all this new technology, he is going to be able to live a lot longer, more complication-free life than I have."

Jackson’s clinical trial is among roughly 20 through the Barbara Davis Center for Juvenile Diabetes on the Anschutz Medical Campus. Since the center opened in 1980—at a time when Type 1 diabetes was scarcely understood and minimally funded—it has become a model for blending bedside practice with research. And with juvenile diabetes rates soaring 3 percent annually, the center, one of just seven nationwide that focuses exclusively on the disease, is helping unravel the mysteries behind what causes it and how to prevent and manage it. 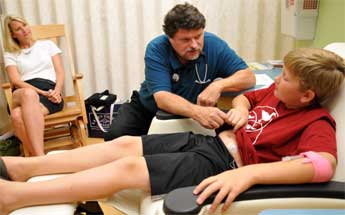 "They have been able to bring hardcore science to the study of human Type 1 diabetes and have provided profound insights into its pathogenesis," says Richard Insel, MD, executive vice president of research for the Juvenile Diabetes Research Foundation. "They have essentially created the paradigm by which we can better understand this disease."

When Peter Gottlieb, MD, began studying diabetes in the 1980s, nobody was sure what caused it. Hormone imbalances? A virus that attacked pancreatic beta cells which produce insulin? Today, researchers have come to realize the disease is actually the result of an overactive immune system leading the body to, essentially, attack itself.

"There is a lot of new evidence, some of which we have published here, showing that even pre-diabetic individuals have an over-active immune system," says Gottlieb, a professor of pediatrics and medicine at the Barbara Davis Center and the father of two children with Type 1 diabetes.

One theory to explain what’s going on is the "hygiene hypothesis." The idea is that our hair-trigger immune system is wired for a far dirtier world than the one we live in today. The result is that our immune system no longer can distinguish between enemy and friend and, in some genetically predisposed people, overreacts, bombarding the pancreas with beta-cell damaging antibodies.

How early does this start to occur and what causes it to be activated?

To try to answer those questions, the Barbara Davis Center, part of the School of Medicine, joined a 20-year, six-center trial called TEDDY (The Environmental Determinants of Diabetes in the Young) in 2004. The study follows nearly 8,000 infants who have a relative with Type 1 diabetes or genes associated with it. Over the course of their lives, they will be tested to determine if factors such as diet, stress, vaccines, illness or environmental influences may send their immune system into overdrive. 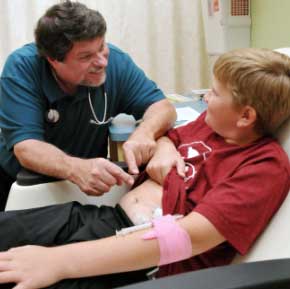 The notion of preventing diabetes once seemed like science fiction. But today, nearly a dozen clinical trials at the Barbara Davis Center are testing compounds believed to do just that.

One is the NIP (Nutritional Intervention to Prevent Diabetes) trial. It studies whether the omega-3 fatty acid DHA (docosahexaenoic acid), administered in infancy, might prevent the immune system from overreacting. Professor Peter Chase, MD, who launched the trial two years ago, says the results are promising.

"Our hope is to take it a step further and do a larger trial worldwide using DHA and vitamin D in young infants to see if we can thwart the development of autoimmunity in diabetes," Chase says.

Meanwhile, Gottlieb is in the midst of six trials that are testing the "anti-CD3 antibody," which is designed to fend off islet-destroying immune cells.

"We are trying to find a way to prevent patients from needing as much insulin or—ultimately—ever needing it in the first place," Gottlieb says.

While broadly available drugs for stalling the progression of Type 1 diabetes remain years away, new high-tech insulin pumps and sensors such as Jackson used may be able to achieve the same outcome.

Of children who develop Type 1 diabetes, "those who have extremely high blood-sugar levels that are uncontrolled have either no honeymoon at all or a very short one," says Robert Slover, MD, who heads the Barbara Davis Center’s involvement in the three-center, 75-patient, closed-loop NIP trial. He notes that high blood sugar itself can destroy beta cells in the pancreas. "These kids seem to have lost most of their beta cells right up front, as opposed to those who are caught very early and put on insulin."

Already, research trials show that people who use a sensor-augmented insulin pump can control blood sugar far better than those who are administering shots. They also tend to have fewer incidences of hypoglycemia (when too much insulin causes blood sugar to crater). Slover, an associate professor, hopes to learn whether putting newly diagnosed youth on a sensor-augmented insulin pump right away might stabilize their blood sugar so much it preserves their beta and slows the progression of the disease.

Meanwhile, by "closing the loop" for 72 hours with patients like Jackson, Slover is testing a concept that could revolutionize diabetes management.

"The holy grail of that closed-loop system would be a time when the patient could live life without having to worry about glucose at all," Slover says, noting that ultimately such automated systems could be implanted in the body, serving as a sort of artificial pancreas. "That is our goal, and it is probably achievable within the next decade or so."

"Sometimes he hangs out in the normal range for so long that I find myself asking ‘does he really have diabetes?’" says his mother. "Fortunately, he hasn’t been on the rollercoaster ride that I was on, and that is really exciting to see.

"He is basically a normal little boy. I’m so proud of him for taking this leap of faith."