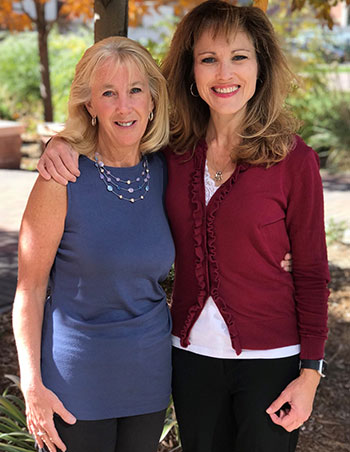 (December 2017) In the late 1990s, Teri Hernandez was a cardiovascular nurse in the land of deep-fried Thanksgiving turkeys.

Caring for patients at Baylor University Medical Center in Dallas, she saw how their health had been compromised by a lifelong habit of eating food that had clogged their arteries and caused other problems.

“I was taking care of people who were very sick with disease either after their surgery or at their death – through the whole trajectory – and I saw how they ate,” Hernandez said.

Hernandez set out to translate that experience into one that improves the quality of life from the start and today she’s a researcher on the University of Colorado Anschutz Medical Campus, challenging the conventional wisdom of a frequently recommended low-carbohydrate diet for pregnant women with gestational diabetes.

“These women are oftentimes broadsided when they go through the first two trimesters of pregnancy and then they get a diagnosis of gestational diabetes,” Hernandez said. “They thought everything was going OK and suddenly they have a high-risk pregnancy label.”

“They’re put on a diet and they’re told not to eat carbs, or to restrict because they will make their baby big,” Hernandez said. “No bread, for example. And then for the first time in their they have to check their blood sugars four times a day.

“So you can see why they felt like prisoners to this nutrition plan, which was meant to control their sugars – and which does control sugars, at least to some degree. But instead what we noticed is that they were eating high-fat diets to replace the carbs, kind of like those of my sick cardiovascular patients.”

Well, those moms-to-be weren’t consuming the deep-fried turkeys that Hernandez noticed during her time in Texas. But, still, the diets of these pregnant women were filled with similar fatty foods.

“They were being told, ‘Don’t eat your cereal, but go ahead and eat sausage and eggs and bacon because it will not cause your sugars to go as high,’” Barbour said. “But that’s just a high-fat diet without the lower

calories that is characteristic of the Atkins diet. Teri really questioned whether this diet made sense.”

It turns out that the sausage-without-the-biscuit, bacon-without-the-bun diet wasn’t all that healthy either. Instead, such a high-fat diet may have been contributing to the problem it was intended to fix.

“We have been doing research showing that obese women have higher glucose levels than normal weight women, and they also have higher triglycerides,” Barbour said. “And triglycerides – although it’s really not been appreciated very much – are a very powerful fuel for babies to put on extra fat because it’s actually easier biochemically to make fat from fat than it is to make fat from glucose.”

In several articles, Barbour and Hernandez have demonstrated that obese women have higher as well as higher triglycerides and free fatty acids. Their research demonstrates that higher triglycerides and free fatty acids might be even more important in causing babies to develop excess fat. Babies born with excess fat face greater lifelong metabolic health risks.

“When born with excess fat, their risk for diagnosis of childhood diabetes is even higher,” Barbour said. “We’ve been very interested in the intrauterine environment and how that can place mothers at risk for having a baby at high risk for childhood obesity, metabolic disease, diabetes.”

So, to reduce the chances of a too-big baby and the resulting health risks, Hernandez and Barbour are studying a diet that calls for a balance of complex carbohydrates and lower fat.

“The premise of the CHOICE diet is that a carb is not a carb,” Hernandez said. “Maybe choosing healthier varieties of carbohydrate, such as whole grains, legumes, beans, and complex carbs, will allow women not to have to cut carbs to the point that they feel miserable and feel like they can’t eat any at all. When they cut carbs, they have very few safe foods at that point. And they’re hungry.”

A unique feature of their study is that all meals are provided to the mothers. An initial study using that approach provided encouraging results. Pregnant women eating complex carbohydrates had very similar glucose patterns when wearing 24-hour continuous glucose monitors that sample their every five minutes.

In addition, they had “better insulin action,” Hernandez said, meaning that they were less insulin-resistant than women on the carb-restricted conventional diet. The mothers also had lower free fatty acids, which arise from breakdown products of triglycerides, and the babies born to mothers on the CHOICE diet had a lower percentage of body fat.

“That was enough provocative pilot data that we were able to get a much larger NIH-funded R01 study for five years,” Hernandez said, “and that’s what we’re doing right now.

“We hope that by providing all meals to the mothers in our study that we can finally determine the ideal diet for mothers with gestational diabetes, and perhaps for all pregnant women, to optimize both maternal and baby outcomes.”