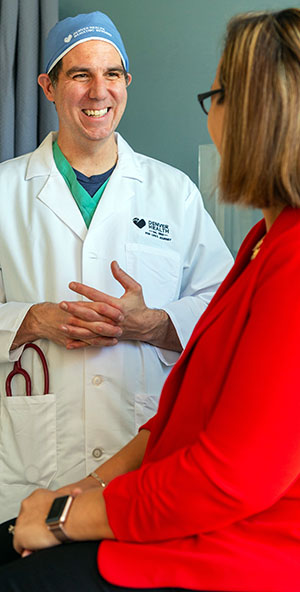 The paper, published in the journal Surgery for Obesity and Related Diseases, describes the benefits of the program.

Pieracci, director of the Denver Health Bariatric Surgery Center, and his team have performed more than 500 bariatric surgeries over the past decade. As a public safety-net hospital, many patients at Denver Health depend on Medicare or Medicaid.

“We were getting four or five — sometimes even 10 referrals a month – for bariatric surgery that we had to turn away because they didn’t have insurance,” Pieracci says. “That’s when we started meeting as a team to try to come up with a solution.”

First, Pieracci and his team created a petition stating that bariatric surgery should be offered to all, regardless of ability to pay. More than 100 Denver Health providers signed.

“It was kind of a grassroots movement,” he says. “The bariatric surgery program is very collaborative and multidisciplinary. We used that to our advantage when we were discussing with our administration the notion of funding surgery for uninsured patients.”

Then, Pieracci and his team met with Denver Health’s Medical Necessity Committee, which decides the procedures that are approved for patients without insurance. Life-saving treatments, such as cancer surgeries, are automatically approved, while procedures like cosmetic surgery are usually denied. Bariatric surgery existed in a gray area.

“It had never really been considered by that committee,” Pieracci says. “So we made a presentation explaining why we thought bariatric surgery should be covered, using the logic that the committee already covers surgeries that increase patients’ lifespans or help with other serious health problems. We said that bariatric surgery should be in that same category because we know that it increases longevity and cures things like high blood pressure and diabetes.”

The committee agreed. The next step was getting approval from the hospital administration. For that meeting, the group collected existing studies on the cost-effectiveness of bariatric surgery, along with its own data.

“We collected about six months of data on our current bariatric patients and were able to show that they were less likely to show up in the emergency room for issues related to diabetes and high blood pressure after surgery,” Pieracci says. “Since most of those ER costs are passed on to the hospital, the financial argument is a very sound one: we can do one surgery upfront and prevent a lifetime of complications.”

“Overall, the outcomes we’ve seen in our uninsured patients are the same as we’ve seen in our insured patients,” Pieracci says. “Which is that by the one-year mark they’ve lost about 70% of their excess weight. About 80% of patients who had diabetes are cured of their diabetes, and about 70% who had high blood pressure are cured of that. It’s a huge quality-of-life change for our patients who can stop taking those injections or medications.”

Pieracci hopes to serve more uninsured patients, but he adds that we need to reshape how we think about both poverty and obesity.

“Patients of lower socioeconomic status are more likely to be obese, and they're also less likely to have access to affordable bariatric surgery,” he says. “And there’s still a stigma where some people think bariatric surgery is the easy way out and that patients just need to deal with their weight themselves. I couldn't disagree with that more.”

The team’s publication provides evidence to challenge those stereotypes.

“They're a group of people who are often forgotten by the healthcare system, so it’s really special to get these patients into our program and know that we’ve helped people who otherwise didn't have a lot of options,” Pieracci says.