A New Disease and a Boy Named Max 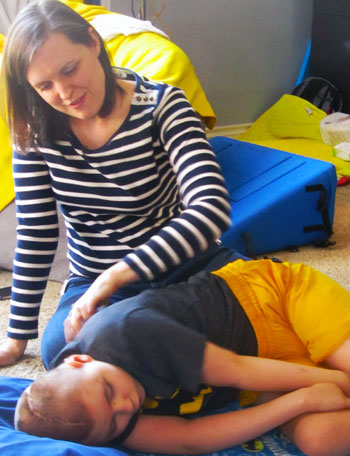 (November 2013) Max Watson lies on his back, rolling his head on a pillow to produce notes on the electric keyboard beneath him while a music therapist plays guitar blues. Max is 10 and needs considerable care. He is unable to control his movements well enough to play with his hands. His mom, Deana Watson, watches with love and a bit of wonder, knowing there are two versions of her son.

Thanks to Research Max, an international team of scientists that includes University of School of Medicine and Children’s Hospital Colorado researchers announced recently that they discovered a new disease called X, or cblX.

Cobalamin is more commonly known as vitamin B-12. The disorder, which is related to an inability to process vitamin B-12, can be devastating.

“Some people with rare genetic disorders cannot process vitamin B-12 properly,” says CU School of Medicine’s Tamim Shaikh, , a geneticist and senior author of a paper about the new disease that was published in September in The American Journal of Human Genetics. “These individuals can end up having serious health problems including developmental delay, epilepsy, anemia, stroke, psychosis dementia.”

The discovery, which could help doctors diagnose the disease and lead to prevention or treatment, is made possible by the relatively new ability of researchers to peer into a patient’s genetic makeup at a low cost to discern what is going wrong that might cause a disease.

Obtained from foods such as milk, eggs, fish and meat, B-12 is essential to human health because it helps the body convert food into fuel. It’s vital to the nervous system and for making red blood cells.

Max was born with symptoms that resembled those of the disease C deficiency, or cblC. But Max’s doctor, Johan Van Hove, MD, a professor in the CU medical school’s Department of Pediatrics, had doubts. Max’s symptoms seemed too severe.

“We knew from early on that something was unusual about this patient,” Van Hove says.

other researchers began looking into the genomes of patients diagnosed with cblC. Most shared a genetic glitch that caused the B-12 problems. But a few, like Max, didn’t; whatever they had, it wasn’t cblC.

So Shaikh, a pediatrics associate professor, and CU colleagues used what is called next-generation genetic sequencing to delve into all of Max’s DNA. What they found was a new mutation in the gene HCFC1. They then examined that same gene in other patients, obtained from partners at the National Institutes of Health and in Canada and Switzerland, who didn’t fit the cobalamin C genetic model.

Thirteen of them carried mutations in HCFC1, which controls an enzyme that helps the body metabolize B-12. When that system malfunctions, food can’t be broken down properly and harmful substances accumulate in the body. Shaikh finally could explain to Max’s parents what had happened.

Max’s disease is called cblX because the gene is on the X chromosome; it affects only boys. While only 14 people on earth are known to have it, further testing likely will find more.

The research is encouraging, Van Hove says, because “if you have some idea how the system works, that is the beginning of providing more logical treatment.”

Shaikh says more work, which the CU pediatrics department hopes to lead, may lead to discovering other diseases and even the ability to head them off.

For Shaikh, the discovery has meant more than solving a genetic puzzle. Unlike many researchers, he had the opportunity to get to know Max and his family as he was trying to help them. Max’s sister Abbey, 15, volunteered in his lab, and Deana and Steve, Max’s father, met often with the research team.

“They are,” Shaikh says, “an amazing family.”

So while the music plays beneath her son’s head, Deana Watson caresses Every-Day-At-Home Max, knowing that while this discovery doesn’t immediately improve his life, Research Max might help others in the near future.

“Parents want their kids to make a contribution to the world,” she says. “This is Max’s contribution. We are very proud of him.”