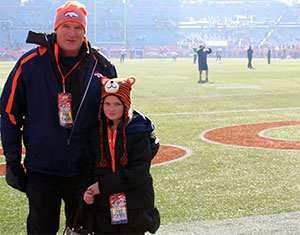 (May 2014) When James Hill, , professor of pediatrics and medicine, and executive director of University of Colorado’s Anschutz Health and Wellness Center, was a newcomer to the state back in the 1990s he heard about a program that allowed any fifth-grader ski free.

What a brilliant marketing idea, he thought.

Kids that age can be insistent once excited about something. They’ll bug their parents to take them to the slopes, and the ski industry makes money off the whole family while hooking a future customer. But back then, Hill’s own kids were so young that he tucked the notion away while becoming one of the nation’s leading voices on pediatric nutrition.

A good idea, though, never really goes away.

More than a decade later, Hill dusted off his fascination with Colorado Ski Country’s successful 5th-Grade Passport program and used the thinking behind it to nudge another group of fifth-graders toward eating healthier and exercising more.

With so much scolding surrounding the problem of childhood obesity and inactive kids, Hill wondered if maybe the grown-ups had the wrong approach.

“Rather than us telling kids what to do, let’s let them make their own choices,” he says. “Let’s teach them the skills to make informed decisions and help them understand the consequences that if they supersize those french fries, it will take 8,000 steps to burn them ” he says.

With that empowering approach, 5th Gear Kids was born. After a pilot rollout last school year, the program this year reaches nearly 7,000 fifth-graders in 70 schools within two Denver suburban school districts. Students, who suggested the program’s name, learn in P.E. and science classes about nutrition and how that whole intake-versus-energy–expended thing works.

And just to drive the point home, there is a bribery component for those who sign up for a points program. (They are, after all, kids.) Points for prizes can be earned if they order a turkey sandwich on whole wheat at Subway or if mom buys almonds instead of cashews at the grocery store. They also earn points if they stay active, whether it be shooting hoops with friends, playing on sports teams or even playing a musical instrument. Pounding piano keys burns calories, too.

There are lots of ways to earn points. For 60 minutes of physical activity, the students earn 150 points. Signing up in participating fitness classes offers a chance for 150 points. Talking to a grocer’s dietician earns 50 points. Getting an annual well-child visit with a pediatrician provides 500 points.

Most prizes involve sports gear but the grand prize is a trip for two to Iceland, which happens to be the home country of Thrudur Gunnarsdot-, , a postdoctoral fellow at CU who is involved in the program.

Last year’s winner, Franklin Carpenter of Aurora, started racking up points to get a bicycle but then he just kept going. In the he compiled an astonishing 40,000 points, and in December traveled to Iceland for five days with his older sister.