Because there are such a wide variety of tumors found at the skull base, the decision for treatment and the method of treatment can require some consideration. The type of tumor, location, severity of symptoms, general health of the patient, and goals of therapy are considered before arriving at a recommendation. In small, benign tumors that are not causing symptoms, observation may be a reasonable course for some patients. In general, treatment consists of one or a combination of therapies:

Surgical removal of the tumor is one option. Depending on the anatomy of the region and goals of surgery, many minimally-invasive techniques are feasible. In some cases, the traditional surgical approaches may be required to achieve the goals of surgery. 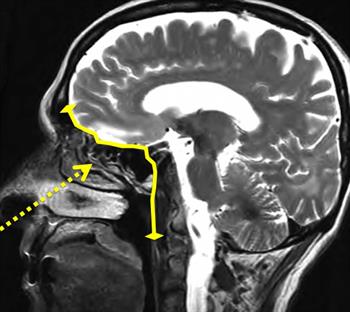 Endoscopic transnasal surgery is a minimally invasive approach that offers exposure of the entire anterior and central skull base, from the frontal sinus to the clivus. 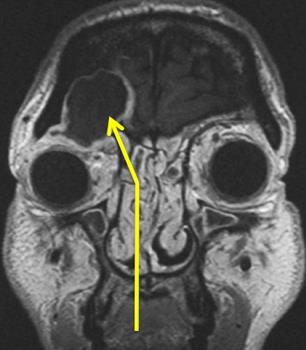 Endoscopic approaches can often reach laterally, in that case to a mucopyocele over the right orbit.

Radiation therapy may be used to treat certain types of tumors as a sole therapy or after surgical resection. Some tumors are more likely to respond to radiation than others. Different types of radiation may be recommended in particular scenarios.

Fractionated radiotherapy: A specific dose of radiation is delivered in parts rather than all at once.  Radiation is usually delivered in daily sessions five days per week for two to seven weeks. The exact treatment schedule is determined by the radiation therapist.

Focused radiation: radiation that is directed only at the tumor.

Whole brain radiation therapy: radiation is directed at the entire brain.  This form of radiation is used cases where there are multiple tumors or a tumor spreads over a large area of the brain.

Medical treatment of skull base tumors consists of chemotherapy, and is reserved for malignant tumors. Depending on the particular tumor type, consultation with a medical oncologist may be recommended to discuss the merits of chemotherapy with traditional agents or newer targeted therapies, or participation in a clinical trial.