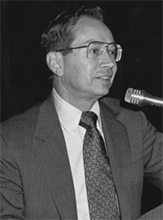 Dr. Stuart Schneck was one of the longest-serving and most distinguished members of the Department of Neurology. He was born in New York City, attended Franklin & Marshall College and earned his medical degree from the University of Pennsylvania School of Medicine. He came to Colorado in 1954 for his residency in Internal Medicine and subsequently completed his Neurology residency, followed by a fellowship in Neuropathology from Columbia University. Stuart joined the CU faculty in 1963, serving as Professor of Neurology and Pathology, where he was well-known for his clinical and teaching skills. He also performed with distinction as an Associate Dean for Clinical Affairs for the School of Medicine, as President of the University of Colorado Hospital Medical Board, as President of the American Board of Psychiatry and Neurology, and as the national President of the Alpha Omega Alpha Honor Medical Society. Upon his retirement in 1995, he achieved Emeritus status and continued to serve on the medical school admissions committee until 2016.