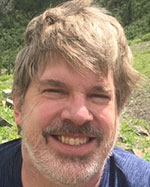 Protein, RNA, and other functional molecules that exist in living organisms are the product of millions of years of evolution. The substitutions that have occurred over the years had to have been compatible with the constraints of structure and function, and thus the evolutionary record provides critical data for understanding macromolecular structure/function/sequence relationships. In our laboratory, we use the techniques of molecular evolution, computational biology, and evolutionary genomics to exploit this record to make inferences about past biological events and to make testable predictions about the effects of mutations.

Context-dependent evolution: How do changing structure, function, and sequence context affect the evolutionary process across sites and over time? The ³environmental² context of each site may change over time as macromolecules adapt and functionally diverge, and interactions may lead to coevolutionary relationships among sites, or even ³adaptive coevolution².

Sites may evolve faster or slower, and different amino acids may be acceptable or deleterious as the protein context changes. One exciting technique for inferring functional change is resurrection and analysis of predicted ancestral molecules. A close collaboration between theory and practice is needed, along with a healthy respect for statistical uncertainty. Current experimental systems include the photolyase/cryptochrome family and lysozyme.

Evolutionary genomics: Increases in genomic biodiversity leads to more powerful discrimination of evolutionary processes among sites, and the sampling of complete mammalian and other vertebrate genomes is rapidly reaching a level where powerful genome-wide evolutionary inferences can be made. We are involved in the Monodelphis domestica and Anolis carolinensis genome projects, which will be the first non-Eutherian mammal and first non-avian tetrapod completely and thoroughly sequenced. What important changes happened at the molecular level to make us mammals, and to make us human? To deal with comparative biology in large genomes, we have developed novel methods of analysis that allow rapid comparative genomics on single desktop computers. Vertebrate mitochondrial genomes are sampled much more densely (many hundreds are currently available on GenBank), and allow a much more thorough exploration of the benefits of genomic diversity, and of the intricacies of the interactions between mutation and selection in protein complexes and in functional RNA molecules. Our continuing explorations with these molecules are providing important insights into replication and mutagenesis, as well as instances of rapid bursts of adaptive coevolution in primate, squamate, and other lineages.

Phylogenetics, Population Genetics, and Evolutionary Thermodynamics: Comparative biology rides heavily on reconstruction of phylogenetic relationships among species, and context-dependent processes can dramatically improve phylogenetic inference if they are properly understood, as well as dramatically hinder accurate phylogenetic inference if they are poorly understood or over-simplified. Furthermore, functional macromolecules need to be seen as thermodynamic entities that are the products of natural evolution in populations; overly simplistic assumptions are equally wrong if they emphasize biophysical understanding but ignore population genetics, or if they emphasize a detailed population genetics model with purely fabricated models for distributions of selection coefficients. We attempt to merge understanding of these disparate fields to provide more informative simulations of macromolecular evolution, which results in improved models for evolutionary inference, phylogenetic reconstruction, and prediction of mutational effects.