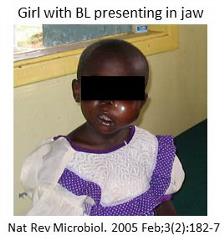 In broad terms, our lab studies why EBV, a virus that silently persists in the majority of the world population, emerges to cause different types of malignancy in selected populations.  Our research focus has been on endemic Burkitt’s lymphoma (BL), the most common childhood cancer in Equatorial Africa.  Endemic BL is linked to infection with both EBV and Plasmodium falciparum malaria.  Through my research program based in Kisumu, Kenya and in the US, we have uncovered a number of ways that repeated infection with P. falciparum malaria, a feature in areas where malaria transmission is holoendemic, dysregulates EBV infection and immunity, and ultimately increases the risk for BL in children.

We have completed 2 longitudinal birth cohorts in Kenya to address the question of why P. falciparum malaria infection of infants is linked to BL.  In the first birth cohort, we followed infants from 2 different regions of Kenya with different levels of malaria transmission.   We found that a significant number of infants from the malaria holoendemic region were infected with EBV by 6 months of age supporting a long held but not yet tested hypothesis that early age of EBV infection is a risk factor for Burkitt lymphoma.  Early age of infection leads to shorter times between subsequent detection of EBV infected cells whereas high malaria transmission intensity is associated with higher rate of expansion of EBV infected cells.  Finally, we found that children from the malaria holoendemic region had higher expression of the enzyme AID in the peripheral blood.  AID is linked to the c-myc translocation that is found in BL.  Our studies have pointed to a new understanding of the role of holoendemic malaria in increasing the risk for BL in children.  Current research is now focusing on how Plasmodium dysregulates B cell function and AID activation.

Development of a model to study EBV infection of T cells
Until recently, the major strain of EBV, EBV-Type 1 (-1) was the primary model to study EBV infection and it does not readily infect primary T cells.  However, we have shown that a second strain of EBV, EBV-2, readily infects CD8+ T-cells in vitro.  This event leads to cell proliferation and activation, and also alteration of the cytokine profile.  Moreover, EBV-2 infected T cell cultures survive for 10 weeks in the absence of exogenous IL-2 suggesting this virus induces pro-survival cell programs. The EBV latent genes, LMP-1, EBNA-1, and EBNA-2, were expressed and indicative of the “growth” latency program.  This novel finding that infection of T cells with EBV-2 has provided us with a new tool to dissect how EBV contributes to EBV-associated T cell lymphomas and lymphoproliferative disorders.  Current research is developing a humanized mouse model to study EBV-2 infection and to determine how EBV-2 infects T cells.

Effects of Plasmodium infection on B cell homeostasis
Because BL is a B cell malignancy, we wanted to understand how P. falciparum malaria modulates B cell development.  We approached this in 2 different studies.  In the first, we evaluated how acute malaria in children modulates B cell homeostasis.  We observed that children with acute malaria had elevated levels of CD10+ transitional B cells.  This was among the first studies showing changes in B cell subset distribution during acute malaria infection.  We next evaluated how ecologic exposure to malaria (i.e. living in a malaria high transmission or low transmission region in Kenya) influenced the development of B cell subsets.  In this study, we followed a cohort of infants longitudinally from birth through 3 years of age.   We found that children from areas with high malaria transmission have elevated atypical memory B cell subsets compared to children from a low malaria transmission region.  In contrast, we observed suppression of marginal zone like B cells in the children from the high malaria transmission region.  Current research is focused on understanding the differences in development of B cell immunity to P. falciparum asexual and gametocyte immunity.

Preclinical studies of anti-malaria drugs
The 8-Aminoquinoline drugs are among the most effective of the anti-malarial drug classes available.  Primaquine (PQ), the prototypic 8-AQ, is the only approved drug able to eliminate the hypnozoite stage of Plasmodium vivax that is responsible for relapsing malaria.   PQ is also effective against the gametocyte stage suggesting that 8-AQs will be important in malaria transmission blocking campaigns.  However, PQ has had limited widespread use in treating malaria since PQ causes oxidative stress in glucose-6-phosphate dehydrogenase (G6PD) deficient individuals which can result in potentially life-threatening hemolytic anemia6.  The challenge in developing a non-hemolytic 8-AQ has been the lack of a suitable animal model system to predict the hemolytic toxicity of new compounds in humans.  We addressed this by developing and validating a NOD/SCID mouse model where huRBCs from G6PD deficient(d) donors are engrafted into the mice.  Treatment of both African (A)- and Mediterranean (Med)- G6PDd huRBC engrafted NOD-SCID mice with PQ resulted in a dose dependent loss of human RBC, increase in mouse reticulocytes and increase in spleen weight, all indicative of hemolytic toxicity.  The data obtained suggest that the G6PDd huRBC SCID mouse model can predict the hemolytic toxicity in G6PD deficient individuals.  This model has several advantages including the use of actual G6PD deficient human cells and an ability to compare the effects of potential new drugs on hemolytic toxicity of both A- and the more sensitive Med- G6PD deficient RBCs.

​Click here for a link to Dr. Rochford's recent publications.