Research in her laboratory focuses on the mechanisms used by taste receptor cells to detect the sweet, salty, sour, bitter and umami tastes in the foods we eat. Taste receptor cells are housed in special end organs called taste buds, which are found in connective tissue papillae on the tongue and in the epithelium of the soft palate, esophagus and larynx. Taste cells, unlike other sensory receptors, appear to use a diversity of mechanisms for transduction. Salts and acids directly modulate ion channels to depolarize taste cells, while sweet stimuli, amino acids and bitter compounds bind to specific membrane receptors coupled to G proteins and second messenger signaling cascades. Several taste receptor proteins and downstream signaling effectors have been cloned, including the receptors for umami, sweet and bitter stimuli. We have several lines of transgenic mice expressing green fluorescent protein (GFP) in defined subsets of taste cells so that particular taste cells can be targeted for physiological experiments. Utilizing electrophysiology, calcium imaging, immunocytochemistry and molecular biology, we have been examining the second messengers and ion channels involved in the transduction of taste stimuli.

In addition to the initial events in transduction, we are interested in how taste information is communicated to the nervous system. What is the taste cell transmitter and what regulates its release? Our recent studies suggest that the so called Type II taste cells, those that express receptors for bitter, sweet, and umami taste stimuli, release ATP as a transmitter to activate taste nerve fibers. However, other transmitters have been identified, including serotonin, noradrenalin, and GABA, all expressed in the so called Type III cells. What is the role of these taste cells in signaling to the nervous system, and which transmitters are involved? We are currently using transgenic and knockout mice to address these questions.  These studies have been done in collaboration with ​Dr. Tom Finger's lab.

However, more recently I have switched from purelytransduction mechanisms to a more systems oriented approach, to define the role of specific cell types in the taste bud.  Although the function of Type II cells has been clearly delineated, much less is known about the function of the Type III cells, which transduce sour and some salty stimuli, and the Type I cells, which have been thought to play a primarily supportive role in the taste bud.  Due to the availability of cell-type specific genetic tools, we have been able to use optogenetics to specifically activate either Type I cells or Type III cells with light instead of chemicals to determine the specific roles these cell play in the taste bud. Using light to activate these specific cell types, we can specifically stimulate either of these cell types in the absence of chemicals, which have nonspecific effects on other cell types in the taste bud. This project is the main focus of my current R01 and formed the basis of Courtney Wilson’s PhD dissertation.

Finally, in collaboration with Dr. Vijay Ramakrishnan, we are interested in the role of solitary chemosensory cells in the nasal epithelium of both rodents and humans.  These cells, which express elements of the bitter taste transduction pathway, are innervated by the trigeminal nerve and mount an inflammatory response to inhaled irritants and bacterial signaling components. 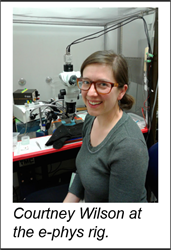 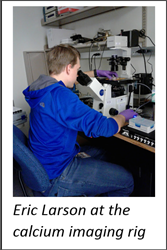