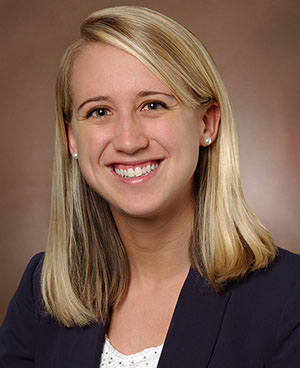 ​(May 27, 2016) A family tradition of Christmas Day hospital rounds with her father launched Brittany Badesch on the path to medical school when she was just 5 years old.

“I fell in love with it,” says Badesch, whose father David Badesch, MD, is a pulmonologist. “I never thought twice growing up about becoming a doctor.”

She chose her medical specialty early as well after an encounter in high school with a peer with intellectually disabilities.

“I was running track and she was out on the field, too, because she helped with the football team in the afternoons,” said Badesch, who attended Cherry Creek High School. “She stopped me and said hello and introduced herself as I was running by.”

Badesch and a track team friend thought the girl seemed nice so they decided to join her and her friends for lunch the next day. The lunches continued through high school and resulted in a school-wide program called Buddy Lunches intended to better integrate students in the special education program.

In college, Badesch continued to work with people with intellectual disabilities while preparing for medical school.

“I enjoyed all the sciences but I wasn’t sold on a biology or chemistry major,” she said. “I found out I could major in special education and still be pre-med at the same time. It was the best choice I ever made.”

Once at CU School of Medicine, Badesch started the Pursuit Program to help health care students develop skills to work with patients with disabilities.

“A lot of times there’s a gap in providers’ training through no fault of their own – a lack of comfort in taking on these patients who can be complex medically and socially. My passion is to try to develop ways to help health professionals feel more equipped working with this population.”

Adults with intellectual disabilities employed by ARC Thrift Stores come to campus for program events, which use a curriculum based in role playing the provider-patient relationship.

After her residency in medicine and pediatrics at Johns Hopkins Hospital, Badesch, 25, hopes to work primarily with children and adults with intellectual disabilities.

“I envision my career being part clinical, and part research and advocacy with this population. It’s a special type of research working on educational models to improve health care providers’ willingness to care for individuals with intellectual disabilities.

“From my standpoint, there is no area of focus, no matter what specialty you’re going into or whether you’re a nurse or a doctor, where you won’t care for patients with disabilities.”

She believes that care for children with intellectual disabilities has improved in recent years.

But adult care has fallen behind, especially for patients transitioning to adulthood, she said.

“This population until recently was not necessarily living long enough to become adults, so there wasn’t a need for training.”

A Gold Humanism Honor Society inductee and a member of Alpha Omega Alpha, Badesch also served as student body president for the past two years and participated in the student committee for the upcoming Liaison Committee on Medical Education accreditation site visit.

“My classmates are the single best part of my medical education,” said Badesch, who had not participated in student government before medical school. She encourages incoming students to keep an open mind, “not just in the clinical realm but in all aspects of your training. I have learned so much – and not just about medicine.”

Badesch always knew she would become a physician, but during a third-year clinical rotation, she had the chance to revisit the decision made during those childhood hospital rounds.

She was doing paperwork at University of Colorado Hospital when someone tapped her on the shoulder. It was her father, who is a professor of medicine at the CU School of Medicine.

“He said, ‘Come on, Brittany, let’s go do rounds on our patients.’” 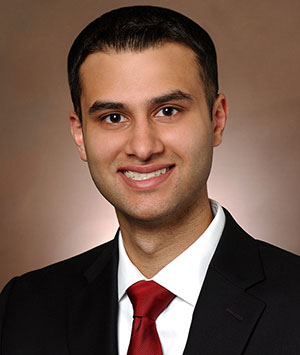 ​(May 27, 2016) When Hamza Pasha was a boy, he could watch his mother work in her clinic from the day-care playground next door.

“If I went up to the top of the slide I could peek over and see her. And then I wouldn’t want to come back down.”

When he visited his mother’s clinic, she let him play with equipment and visit with staff and patients.

His mother, a family medicine physician, stopped practicing medicine after the family left Pakistan for the United States when Pasha was 9 years old. But she’d made an impression, and when Pasha was in high school, he determined he would be a physician, too.

“I’m sort of someone who likes to plan everything,” he said. “I saw that this was the goal and worked backwards. And everything seems to have sort of fallen into place.”

In his sophomore year at CU Boulder, Pasha became a CU Medical Scholar. He worked in a lab for four years researching the physiology of aging, and he taught anatomy. At CU School of Medicine he joined the research track.

He knew his parents had worked hard to earn their degrees - his father is a civil engineer - so “I wanted to make sure I didn’t take anything for granted. I always worked and studied hard.”

This spring he returned to Pakistan for the first time in over a decade and spent time with cousins who also went into medicine. They traded stories about similarities and differences in the two health care systems.

“At least in terms of education it’s very similar. The difference comes in how doctors are viewed. Here, patients respect doctors and our opinions are valued. Over there, patients are hesitant to accept doctors’ opinions. The profession is not highly regarded by the masses.”

He spent time with a cousin who is a trauma surgeon in a busy public hospital and was impressed by his cousin’s commitment despite low pay and poor working conditions.

“He’s devoted his life to that even though his pay is about the same as a banker or an engineer. It’s a government worker pay scale and he works 30-hour shifts in an environment where he’s not respected by patients. Still, he wants to take care of the poorest people. It was really inspiring.”

As an undergraduate, Pasha had spent time as part of a Timmy Global Health medical brigade to Ecuador.  He remembers a patient who had sprained her leg, which meant she couldn’t work in the fields and support her family. “She was just so excited to get a bottle of ibuprofen. It opened my eyes to see how great the need is there.”

Helping the poor in underdeveloped countries was one of the motivations behind Pasha’s decision to choose ophthalmology as his medical specialty.

Until the end of his third year, Pasha, 25, had planned to pursue otolaryngology, but after talking with his parents and mentors he decided that ophthalmology was a better fit for his personality. Plus an ophthalmologist’s skills would always be needed in the developing world.

“I hope in the future after my training is done to go someplace and do my part,” he said.

Switching specialties late in the third year is not common for medical students, but Pasha knew it was the right decision and said he would advise medical students to do the same if they have doubts.

Pasha will spend his first year of residency at Henry Ford Health System in Detroit before transferring to University of Texas Medical Branch/Houston Methodist for his ophthalmology residency. 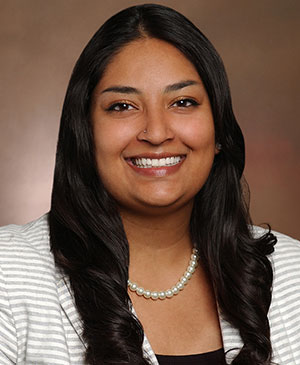 ​(May 27, 2016) A residency in Washington, D.C., is a perfect match for policy-loving clinician and researcher Anireddy Reddy.

Long interested in health policy, Reddy considered a double major in political science and biology while working as an intern at the state capital while an undergraduate at CU Boulder.

With no interest in the latter, Reddy, a Boettcher Foundation Scholar, majored in molecular, cellular & developmental biology and in neuroscience and poured her energies into the Presidents Leadership Class (PLC). The four-year academic and community-based program teaches students how to address complex social issues and disparities.

“You learn not to look to others to fix problems,” Reddy said. “It teaches you how to craft innovation to drive change.”

Reddy, 27, used her PLC training during her gap year before medical school while working for AmeriCorps in Denver’s Montbello High School as it underwent rapid turnaround reform.

“We were struggling to get more than a 50 percent graduation rate,” Reddy said. “And of those kids who did graduate, very few were truly ready for college or a career. A student might graduate and get into college, but then they would find themselves sitting in class next to other students and wondering how they got so cheated, wondering how everyone else got the education that they should have received themselves.”

The experience persuaded her to enter the School of Medicine CU UNITE Track focusing on patient care in urban underserved communities. It also encouraged her interest in community research.

Though she worked in a neuroscience lab researching mechanisms of chronic pain during her undergraduate years, Reddy says she prefers community-based participatory research (CBPR).

“It’s a type of research that is not traditionally valued in medicine,” Reddy said.
“You are working with the community to design your research questions. They are research partners, not subjects. Every decision in the process happens jointly.

“What’s important is the social change that comes out of the research, not necessarily publications and posters.”

“Much of discrimination is miscommunication and a feeling of helplessness. We want patients to feel OK saying ‘I don’t understand’ or ‘Could you repeat that?’ They feel like the physician has all this power and they don’t. It’s also about providers recognizing their own assumptions and biases when approaching patients different from themselves.”

Her pediatric residency at Children’s National Medical Center in Washington, D.C., “is very much a continuation” of her work at CU Boulder and the CU School of Medicine.

“Washington is a very urban underserved community. We know that not everyone has the same access to care and that needs to change…

“Ideally, if I had a magic wand, I’d love to spend half my time in clinic and half in teaching or community work. I hope to take the community-based research approach and work to make it a more accepted model of research. There certainly is a need for researchers and community to work together.”

Reddy’s training has given her confidence and taught her not to be intimidated by entrenched societal problems.

“You don’t have to wait for momentum to get started,” Reddy said. “Every movement begins with a couple of people dedicated to making change.” 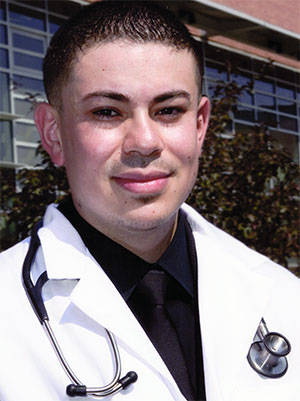 ​(May 27, 2016) A posthumous medical degree was awarded Friday to a classmate remembered for his compassion, kindness and "the best hugs."

Alejandro Daniel Rodriguez-Prieto was a "dear classmate and friend," who knew when he was 3 years old that he would become a physician, said Anireddy Reddy, class co-president.

Dr. Rodriguez died in a motorcycle crash in August 2013.

Graduating classmates lobbied for a posthumous award, and Reddy quoted one of the letters supporting the degree.

"Alex motived me with friendship and kindness through my first year. His memory motivated me through these last few years. I want you to know that your son will be part of my practice every day ... (He) will be present every time I see a patient, talk to a family or work in the community."