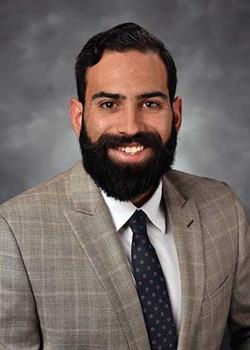 Bijan Ghaffari, one of a dozen medical students in the United States to earn a coveted spot in a combined family medicine-psychiatry residency program, will spend the next five years at Boston University Medical Center becoming board certified in both specialties.

His desire to pursue a holistic path to medicine began almost immediately after graduating from California Polytechnic State University with a degree in biochemistry.

“I had gone into research because I considered the impact that research can have versus direct patient care, and I thought I might be able to make some kind of larger contribution in research,” Ghaffari said. “But as I went further along in my undergraduate work, it made more and more sense to me to become a physician.

“As soon as I graduated I didn’t look back.”

With a change in career plans, Ghaffari decided to gain some health care experience before applying to medical school.

A family friend introduced him to her neurologist, who invited Ghaffari to shadow him in clinic every week.

“Those initial clinical experiences shifted my mindset. I was so enthralled with the patient stories and was really curious about holistic health. Most came in with devastating movement disorders and a wide range of maladies, so I was curious how it was impacting every aspect of their life.”

Another friend put him in touch with TIMMY Global Health. Ghaffari, a Boulder native who is fluent in Spanish, moved to Quito, Ecuador, for a six month volunteer assignment translating and assisting American students and physicians in pop-up clinics.

“I was part tour guide, part cat herder and part health care worker,” he said. “I helped organize and run the clinics so we could give the best care possible.”

After two months he was promoted to a staff position, which extended his stay to 18 months.

Ghaffari was mentored by two nurses, who shared their deep knowledge of the community and its health care systems.

“I would have felt blind if not for them. They guided, taught and collaborated with me,” he said. “The whole experience was really so formative on how I approached medical school. I had to learn so many principles of health care and global health – the pitfalls and the successes, and the ethical issues related to them. I really developed my own skills as a leader as well.”

Working closely with physicians, Ghaffari determined which patients were referred to a hospital.

“I got some early lessons in triage and elective versus necessary treatments. It also gave me a better understanding and appreciation for health care systems, preventive care, tiered health care systems and chronic disease management.”

Using his research background, Ghaffari secured a grant to develop an evaluation process for TIMMY’s chronic disease program. The grant allowed the program to hire a local physician for home visits and to educate health and community workers.

Within three weeks of his return to Colorado in 2015, he started classes at University of Colorado School of Medicine. Beginning in his first year, Ghaffari volunteered at the DAWN Clinic, a student-staffed free clinic serving uninsured patients in Aurora.

“The system at DAWN felt parallel to the care we were providing in Ecuador. My focus really shifted overnight, from an interest in global health and working abroad to a lot of curiosity and focus toward health equity here in the U.S.”

A leader of the Family Medicine Interest Group, his career plans expanded to include the field of psychiatry while at Denver Health in his third year of medical school.

“I kept seeing myself drawn to patients with more severe mental illnesses. I felt patients weren’t receiving the best care physically or mentally. And it wasn’t their fault. “

He noticed patients in Quito and in Denver faced similar obstacles.

“Every patient has to overcome barriers to access health care like language, housing, transportation, finances. Every little piece can make or break a patient’s involvement in care. I decided I wanted to bridge that gap of patients’ mental and physical health – to bring them together to better understand how to care for patients.”

After residency, Ghaffari will spend three years in an under-resourced area with the National Health Service Corps.

“I like the idea of working in a more urban underserved area instead of a being a cowboy rural physician who needs to be able to do everything. I’m better at fostering relationships and leveraging systems than I would be at colonoscopies.”

Ghaffari, 28, an inductee into Gold Humanism Honor Society and Alpha Omega Alpha, is optimistic that breakthroughs in neuroscience will improve care for patients. But he worries that treatment advances won’t help less affluent patients.

“We’re on a big frontier in psychiatry, but I am skeptical that despite whatever innovative treatments are discovered they won’t reach the full population suffering from severe mental illness. We will need a critical discussion of health equities and disparities as the science moves forward and the care lags behind.”